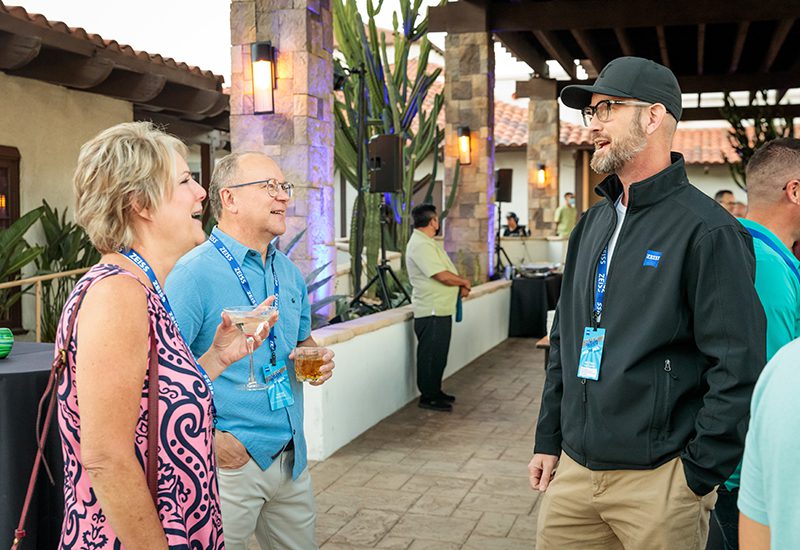 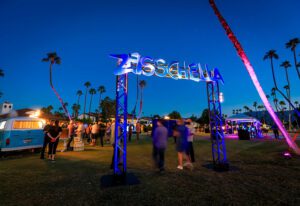 Zeiss capitalized on the meeting’s location to deliver Zeisschella, its own take on the renowned Coachella festival.

For a b-to-b company that relies on field sales to drive its business, formally recognizing—and energizing—the sales team is paramount. So when vision technology manufacturer Zeiss gathered employees for its first in-person National Sales Meeting (NSM) in two years, the stakes were higher than ever. But with a “Lead the Pack” theme, general sessions, breakouts, a team-building competition, evening activities and a Coachella-style afterparty in this year’s mix, Zeiss had little to fear. Some employees even described the event, which took place Oct. 17-21 at a resort in Palm Springs, CA, as the company’s best NSM yet.

To create a COVID-safe bubble for the meeting at Omni Rancho Las Palmas Resort, Zeiss required the sales reps and general managers in attendance to be vaccinated, show proof of a negative COVID test taken within 72 hours of arriving and be willing to take a rapid COVID test once on-site. Attendees were also asked to remain on the premises for the duration of the week-long event, which wasn’t a huge ask given the venue’s array of amenities and on-site bars and restaurants.

Each year, the meeting follows a similar formula, with arrivals on Sunday and departures on Thursday, and 2021 was no different. Most attendees arrived, at scattered times, on Sunday, and were treated to a welcome reception with an outdoor buffet where they could take in a scenic backdrop.

On Monday, general sessions and training breakouts kicked off the day. Then, the Lead the Pack event theme moved to the forefront. The team-focused motif was inspired by the original “Ocean’s 11” movie starring Frank Sinatra, the film that brought the Rat Pack together, and a narrative focused on how the strengths of each individual were fortified when they came together as one unit. Session speakers played around with the theme, some incorporating clips from the movie into their presentations.

On Monday evening, Zeiss held its annual awards night for members of the sales team. The brand flipped the general session room into a Golden Globes-style setup for the affair, which always inspires attendees to come dressed in their finest formalwear. The ceremony included messaging and recognition from sales leadership, but it was hosted by an emcee from Nashville that Zeiss executives had previously enjoyed at a different show. As background music played during winner announcements, the emcee riffed on the songs and even made up his own lyrics to coincide with some of the winners’ home states. Following the ceremony, attendees headed to a casual afterparty at a bar on the resort premises. 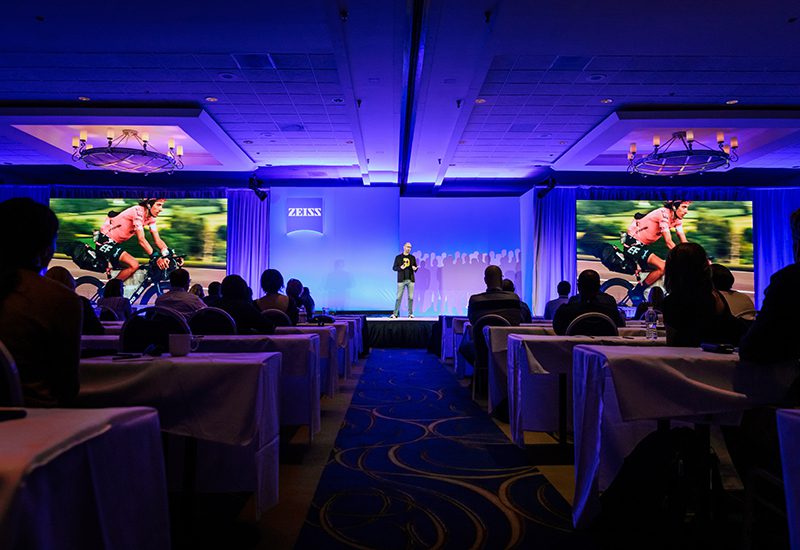 On Tuesday, attendees once again experienced inspirational general sessions followed by educational breakouts. In the evening, they attended a dinner that was a bit less formal than the one experienced during the awards night ceremony. The meal served as a chance for regional sales managers to connect with their teams in an intimate setting. Following dinner, attendees embarked on a golf cart “train” ride to the resort clubhouse for an afterparty. In addition to the open bar and desserts, attendees enjoyed a swing band, dj and ice luge for martinis, which proved to be a big hit.

By Wednesday, there were fewer general sessions and more breakouts, giving the sense that the show was slowly winding down. On top of consuming content, attendees were invited to participate in a team-building competition, an annual, charitable National Sales Meeting tradition. This year, Zeiss worked with American Printing House, a charity located near its Kentucky office that works with LEGO to create LEGO Braille Bricks for the visually impaired, a cause after the company’s own heart. Tying things together further was the fact that Zeiss equipment has been used by LEGO to manufacture its bricks with precision since their invention. During the competition, attendees built famous landmarks out of LEGOs, which were evaluated by a panel of judges.

On Wednesday night, it was time for one final, epic afterparty, where winners of the team-building competition were treated to front-row cabanas and champagne service for the first hour of the evening. The afterparty’s ambience was inspired by the meeting’s location in the Coachella Valley. To that end, Zeiss created a festival-like atmosphere that mimicked the typical multisensory Coachella experience. Among touchpoints: myriad bars, a VW bus photo booth, tunes spun by Club Mesh, an appearance by fire performer ZOR Fyregod (think: fire breathing tricks and flaming swords), performances by a professional saxophonist who flawlessly played along to popular dance songs and, capping off the night, a silent disco under a full Harvest Moon.

NSM attendees departed Palm Springs on Thursday with a premium Zeiss swag bag and the motivation required to tackle a new fiscal year.

“These types of events are very important to get people together for that camaraderie, for that energy and to kick off the new year,” says Matt Woelbern, head of marketing-US Go-to-Market at Zeiss Vision Care US. “And our salespeople are very competitive, so they like to be recognized in front of their peers. So it’s about getting sales excited, getting them together and exiting with as much energy as possible… They’re a little tired when they leave, but the following Monday we want them to think, ‘That was a great NSM and now I’m ready to hit the road.’” Agency: Trademark Events, San Francisco. 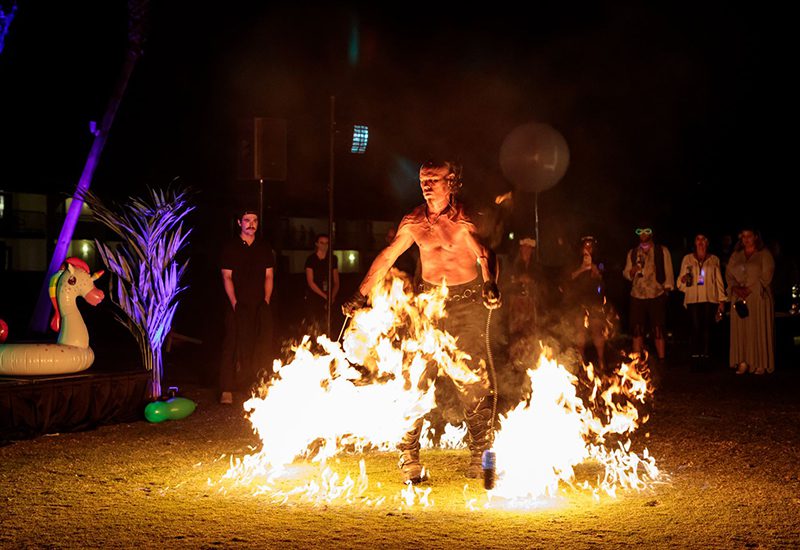 Among highlights of the Zeisschella afterparty was a mesmerizing fire performance by ZOR Fyregod.