Field Report: Our Tour of Van Gogh: The Immersive Experience 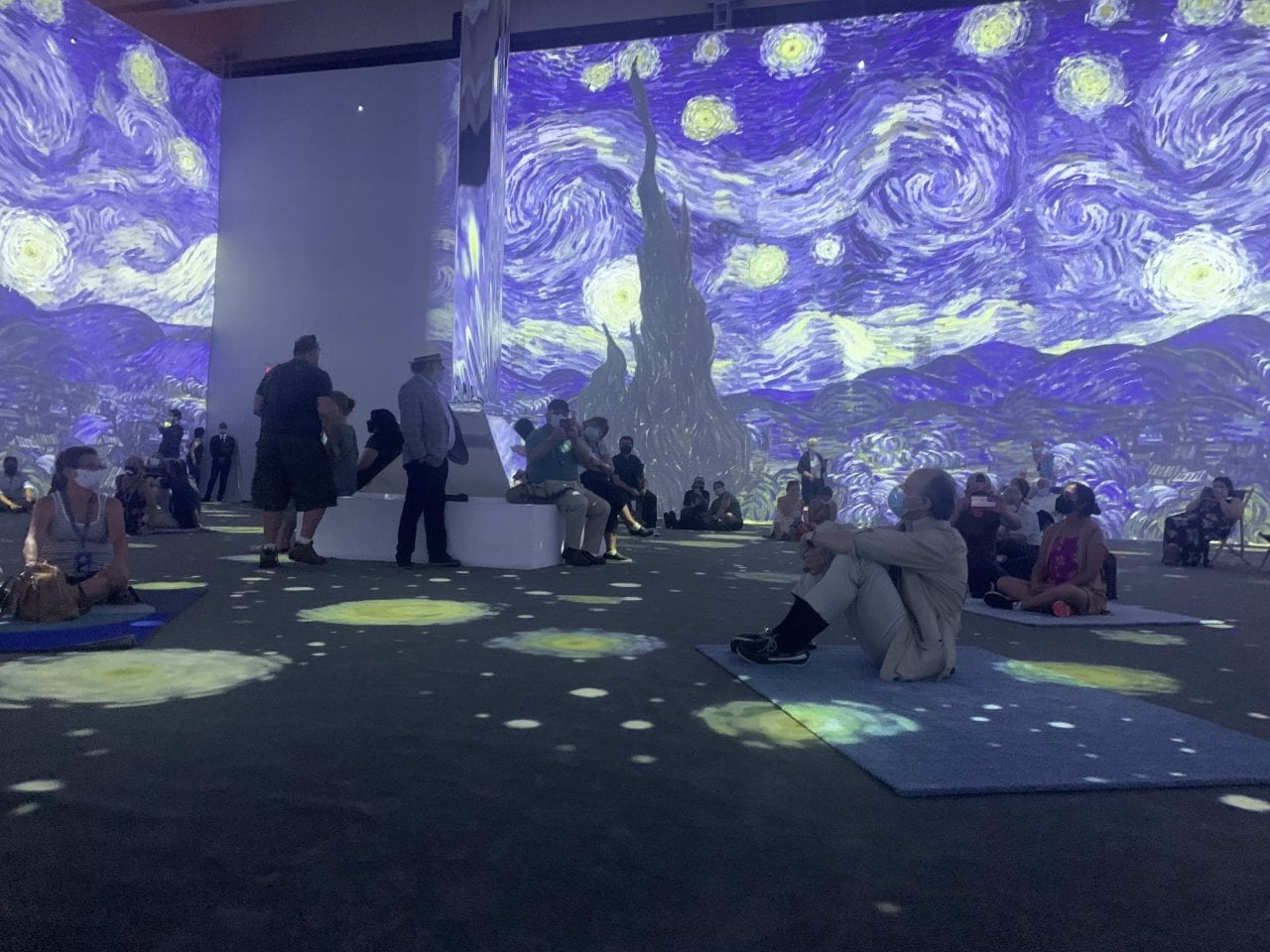 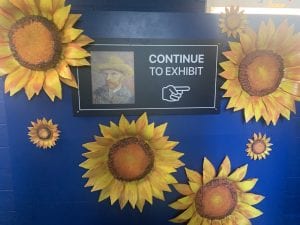 On the way to check-in, attendees meet Van Gogh-style sunflowers and large replicas of the artist’s self-portraits.

New Yorkers can step inside a Van Gogh painting this summer, immersing themselves in 30,000 square feet of projection-mapped walls featuring the artist’s most famous and color-rich masterpieces. “Van Gogh: The Immersive Experience,” an all-digital and handsfree exhibit running in New York City’s financial district through October, adds the touch of culture consumers have been craving via interactive, painting-inspired photo moments and new interpretations of Van Gogh’s work.

Being culture-starved over here at EM, too, we happily immersed ourselves inside the exhibit last month to experience it firsthand. It should be said that there happens to be a second immersive Van Gogh experience running in New York City at the moment, if you can believe it. We’re told this is by pure coincidence and the one described below has toured globally across Europe, Asia and the Middle East.

Highlights include a life-size replica of Van Gogh’s “The Bedroom,” complete with desk, chair, bed and coat rack; a pleasant, 10-minute VR experience that guides viewers through the peaceful neighborhood of Arles, France, which inspired many of the artist’s iconic works; a coloring activity that lets attendees add their own takes to Van Gogh’s classic pieces; and the dramatic finale: floor-to-ceiling, fluid animations of his paintings accompanied by narration and an original classical score.

So, immerse yourself in our take on the exhibition as we guide you through the attendee journey from start to finish.

After we queued up for our allotted timeslot, booked online through the exhibit’s website, temperatures were taken at the door before entering. We then climbed several flights of stairs, passing through hallways decorated with three-dimensional, Van Gogh-style sunflowers and large replicas of the artist’s self-portraits.

Inside, two lines awaited us: a regular, ticketed one and a smaller VIP line, for those who purchased the upgraded ticket, inclusive of both the VR experience and a poster from the gift shop at the end of the visit. Regular ticket holders could purchase the VR portion for $5 from a kiosk in front of that section.

Signage detailed ticket prices and rules to note, including mandatory face masks and requests that attendees physically distance, respect other guests and use hand sanitizer stations frequently. A giant bust of Van Gogh, with colored lights projection-mapped across it, stood to the right of the ticket line—the first of many photo ops. 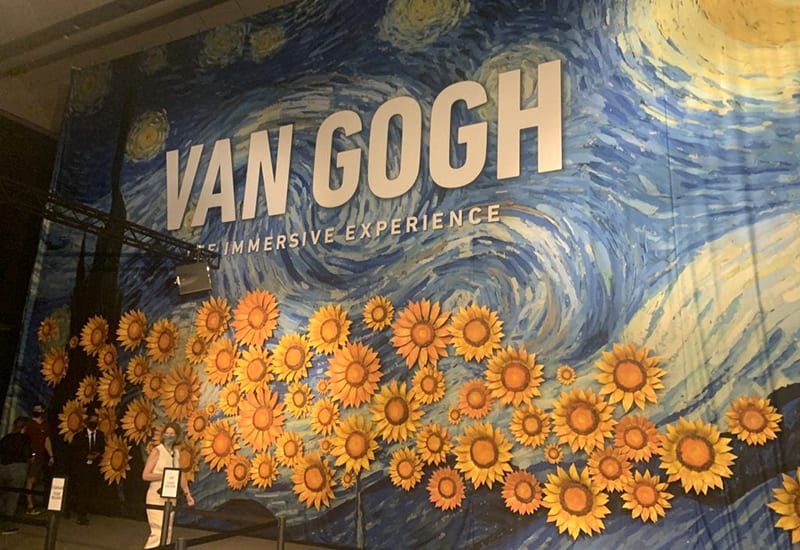 The all-digital and handsfree exhibit is running in New York City’s financial district through October. 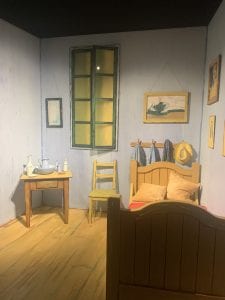 A life-size replica of Van Gogh’s The Bedroom offers a prime photo op.

The attendee journey began in a room that featured wall placards describing Van Gogh: The Immersive Experience to come and providing context surrounding the artist’s life, works and acquaintances—just as you would experience in a museum. The event’s focal point, the projection-mapped portion, was outlined for attendees in three parts: a virtual museum highlighting Van Gogh’s development as an artist, featuring sketches, paint brushes and his own texts in graphic font; color-rich, animated recreations of entire environments from several of the artist’s classic works; and a darker, somber representation of Van Gogh’s final life chapter.

We learned that the exhibit incorporates more than 200 of the artist’s works and is meant to show the depth of his art and the development of the various subjects he studied. A theme, the “About” section tells us, is his propensity to study and paint particular subjects over and over again. Additional details provided included an artist timeline, stories surrounding the complex relationship he held with artist and friend Paul Gaugin, and the context surrounding works such as “Tree Roots,” “Bedroom at Arles,” his vase paintings and his love of Japanese art.

Other touchpoints within the area were a close-captioned video projected onto a large screen detailing “what makes Van Gogh unique” (notably his singular application of color), and a visual projection of the artist’s series of vase paintings, each one slowly changing color and morphing into the next.

Moving on, attendees learned more about specific works and took in murals of Van Gogh’s paintings, featuring quotations from letters he’d written to his brother Theo. Other photo ops included a deconstructed painting installation and a life-size replica of “The Bedroom.” Attendees could pull up a chair and pose for a pic within the famous bedroom scene—one example of many where guests immersed themselves within Van Gogh’s life and work. 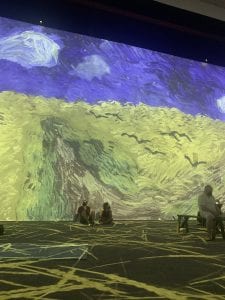 Wheatfield with Crows came alive with a projected flock of birds and wind sweeping through fields.

Armed with copious context and narratives from Van Gogh’s life and career as an artist, we proceeded to the event’s immersive portion. A staffer at the door informed us that the experience ran for 35 minutes and an optional VR experience followed. Floor-to-ceiling projections, themed in the three parts mentioned above, fully immersed attendees in fluid animations and interpretations of the subjects and scenes Van Gogh obsessed over within his art. Viewers could take a seat in lounge chairs donning the pattern of “Starry Night” or sit on the floor atop one of several small rugs dotting the space.

Projections of objects featured in the artist’s paintings, from sunflowers to cherry blossoms to cypress trees to stars, traversed the walls, depicting various scenes from his artwork. Among the highlights: Small boats glided through the waters of “Starry Night;” “Wheatfield with Crows” came alive with a flock of birds and wind sweeping through fields; and flowers fell lightly from trees in an animated version of “Almond Blossoms.” A dramatic score amplified the striking visual effects while voice narration connected viewers to the inner workings of the artist’s thoughts and process.

Adjacent to the immersive experience was a separate room featuring a coloring activity. Guests were invited to choose a partially-filled-in painting template, pull up a chair at a table and begin coloring in the rest to their liking. When finished, a staffer took the “masterpiece” and, with the help of a QR code on the drawing, projected it onto a large screen alongside other drawings.

The optional VR experience, titled “A day in the life of the artist in Arles,” took attendees through the peaceful neighborhood of Arles, France, which inspired many of Van Gogh’s most famous works. The start of the journey: the still-life scene depicted in “The Bedroom.” From there, viewers floated straight through the wall (a movement so realistic that we jumped), down the stairs, out the door and on into the cobblestoned streets.

While strolling through the village, we were presented with scenes from Van Gogh’s paintings as he himself might have observed them. Then, after a brief pause, a painting depicting that particular scene would form before your eyes. Arrows pointing your gaze in the direction of the painting about to appear ensured viewers wouldn’t miss it.

What made the journey through Arles so pleasurable were its myriad small details. Blades of grass gently swaying in the wind, animals grazing, a lively restaurant scene, fireflies twinkling by lamp posts, the sound of currents from the Rhone—to name just a few. Voice narration also helped transport viewers by immersing them in Van Gogh’s thoughts and observations during his stay there.

The entire experience capped off with a modest-sized gift shop area, where VIPs took home a poster—one of four of Van Gogh’s most iconic works—and regular ticket holders shopped for souvenirs. There, we parted with the artist, having been fully “immersed” in his artwork, life and numerous obsessions. All told, it was a welcomed dose of culture after quarantine. We’d even Gogh again. Agencies: Running Subway (production); Exhibition Hub (curation); Barco (4K visuals); DiGennaro Communications (p.r). 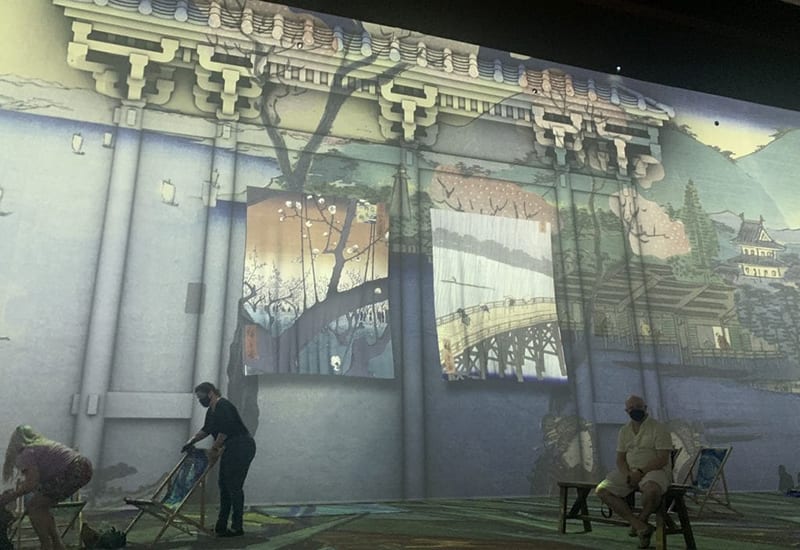 Some of the exhibit’s projections serve as an ode to Van Gogh’s love of Japanese art.