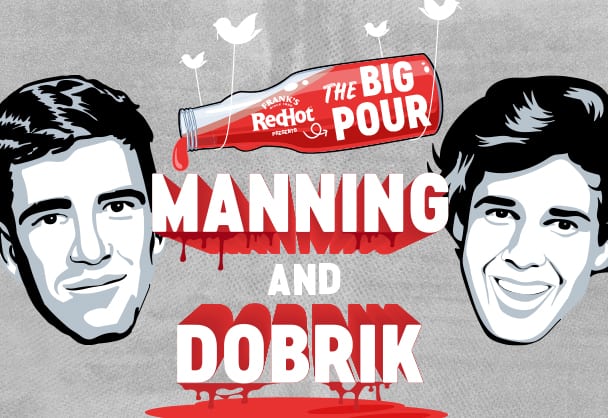 Like chocolate is to Valentine’s Day, hot sauce is to the Super Bowl. For Frank’s RedHot, it’s one of the most important weeks of the year to rise above the feeding frenzy and drive consumption of its game-day ingredient. To that end, the brand has launched an interactive social media challenge ahead of the championship game on Feb. 7 dubbed Frank’s RedHot: The Big Pour, where fans can help former NFL star quarterback Eli Manning “pour that sh*t on everything”—specifically, on YouTube influencer David Dobrik.

Manning and Dobrik are leveraging their audiences and influence in asking fans to help them reach 100,000 tweets using the hashtag #FranksBigPour before the big game. And in exchange for reaching this goal, fans will get to watch Manning pour 100 gallons of Frank’s RedHot onto Dobrik on social media. The campaign microsite is tracking the tweets with a live “Big Pour” meter.

Creatively, the brand is building on its last two years of social media successes that leaned into the brand’s slogan of “put that sh*t on everything”—inserting the signature red bottle into the social conversation, rather than purchase a 32-second TV spot. For last year’s Super Bowl campaign, the brand hosted a spin-the-bottle-style game live on Twitter with prizes awarded to followers as part of its 100th anniversary celebration, earning the brand a spot as the No. 5 trending topic on Twitter in the U.S. This year, the program was all about momentum.

“We thought about how we can do something that is engaging, that brings about a sense of community, and that brings people together around a shared common goal,” says Alia Kemet, vp-creative and digital marketing at McCormick. “One of the things we’re longing for right now is community.”

Frank’s RedHot’s marketing goal this year is to increase buy rates ahead of the broadcast through earned media and consumer engagement, as well as create a viral moment during the game.

“One of the things that’s exciting for us is you’re able to lean into this ubiquity of second screens during game-watching, because people are picking up their phones anyway—we know they’re engaging in this behavior between Twitter and the game—and so how can Frank’s RedHot be a part of that,” says Kemet.

The challenge isn’t all about heat. The campaign has feel-good component, too, which is important in the post-COVID landscape. The brand is donating $100,000 to a charitable organization Manning, Dubrick and Frank’s support, Tackle Kids Cancer. Touch down. Agencies: Grey (campaign); Hovercast (microsite).