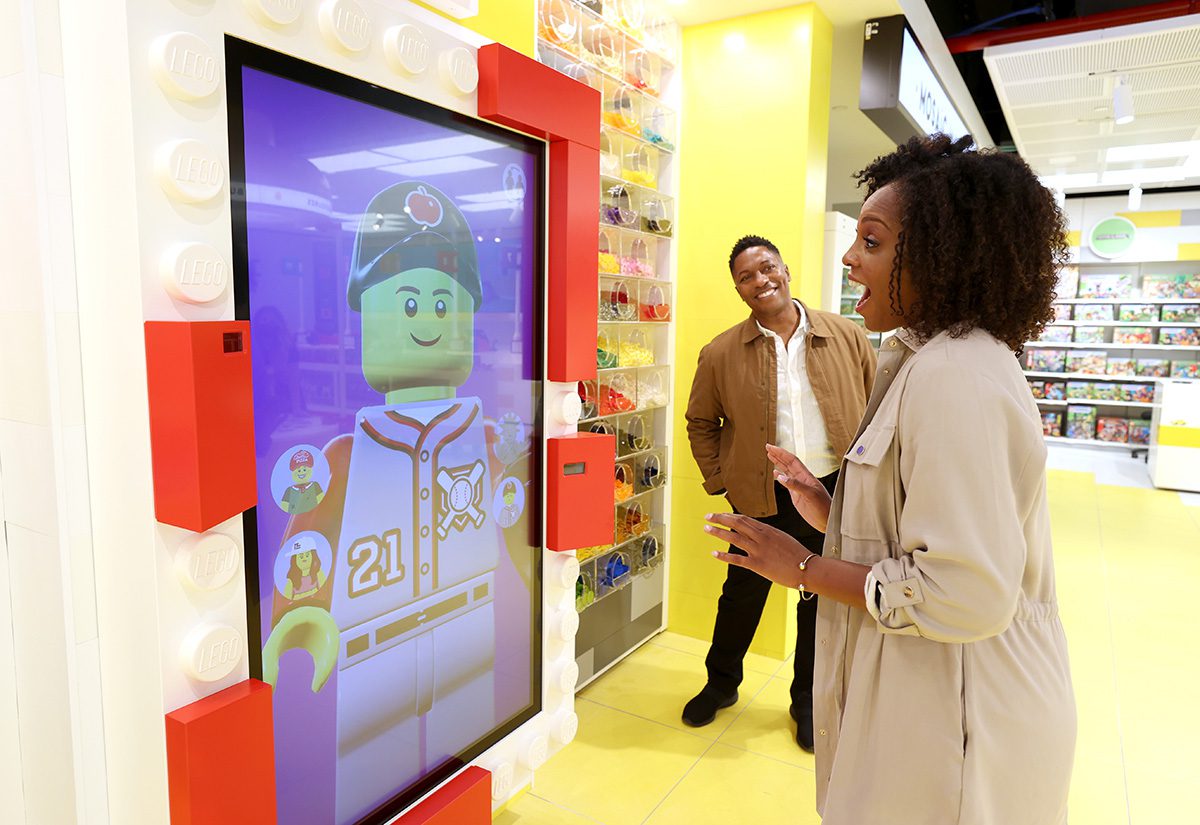 Some good news for a change: Retail store openings are outpacing closures this year. After the pandemic dealt what appeared to be a death blow to brick-and-mortar retail in 2020, the sector is quickly recovering and talk of the “retail apocalypse” is largely in the rearview window.

Much of this revival can be attributed to experiential retail tactics. To lure digital shoppers away from their couches and into physical stores, retailers are heavily leaning into tangible in-store experiences that increase dwell time and build brand connections that go well beyond a transaction.

Along with the shift towards experiential retail have come changes in how shoppers want to be engaged in person. Today’s consumer is seeking a “phygital” retail experience that seamlessly blends digital and physical elements to create an interactive and more personalized journey. Consider Zara, which developed an experiential initiative called Store Mode that rolled out this summer. When a shopper is in a physical Zara location, they can use the brand’s app to locate products they want, reserve a fitting room that is accessible by QR code and use the “Pay&Go” function to purchase items by scanning them through the app while in store.

There’s also the “store within a store” trend that continues to crop up, where two retail brands team up in hopes of driving more traffic to both businesses. The long-beleaguered Toys R Us, for instance, will open up 400 “shop-in-shops” in Macy’s stores nationwide next year. The locations will have dedicated play zones separated by age, interest and category, along with interactive experiences and “activation centers” throughout. It’s a win-win. Toys R Us gets a reboot and Macy’s, whose market share in toys is small, gets to expand its toy business.

And then there are the brave souls who, during the pandemic, have built brand-new brick-and-mortar experiences from the ground up to keep pace with the shifting retail landscape. Like guitar maker Gibson, which in May opened the Gibson Garage, an 8,000-square-foot flagship store located in the heart of Nashville. There, visitors can pick up and play any Gibson Brands product under the sun, appreciate an overhead conveyer belt of 200 guitars, view celebrated music memorabilia, shop apparel and accessories, build a custom guitar and, throughout the journey, learn Gibson’s brand history. There’s also a merchandising area that can be cleared out within 10 minutes to become an event space with a fully-functioning stage where up to 250 people can view product launches and catch live concerts. (Agencies George P. Johnson, G7, and Shoptology handled.)

Gibson’s director-brand experience, Mark Agnesi, who oversaw the development of the Gibson Garage, says the new space was designed to engage and educate everyone from master guitarists to Nashville tourists who may just be popping in for a photo. In either case he wants them to walk away feeling more connected to Gibson’s story, something that’s hard to do digitally. 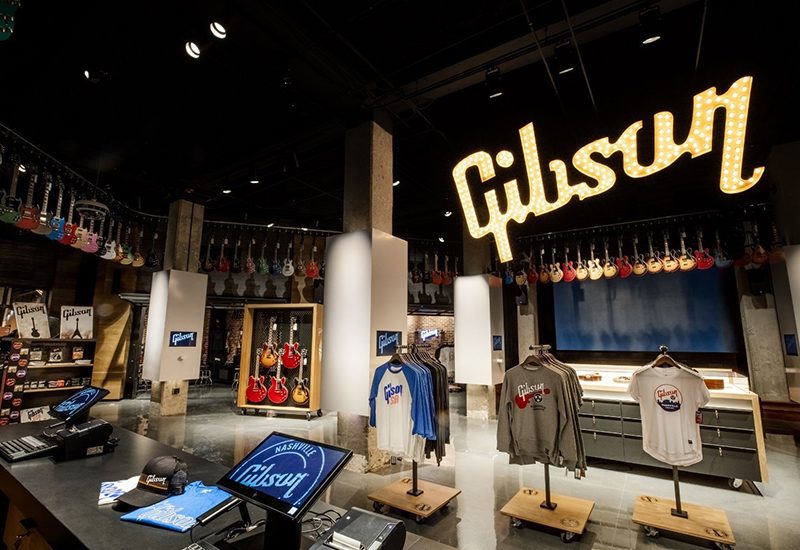 “I really wanted it to be from the absolute aficionados that know every nut and bolt and screw on the guitar down to people who have never picked one up that when they walk out the door, they’ve learned the history, they understand the gravity of the brands and how they’ve not only changed popular music, but through that, how they they’ve changed popular culture,” he says.

Agnesi says a key driver of Gibson’s in-store success has been its knowledgeable and passionate staffers, all of whom were specially trained on every aspect of the Gibson brand. “If you have a question on a product and you ask one of the Gibson gurus for help, they know the answer. Being able to come directly to the brand and have a relationship and have those questions answered is a huge advantage,” he says. “I think having that personal relationship with the brand that you love is something that people are going to want more of in the future.” 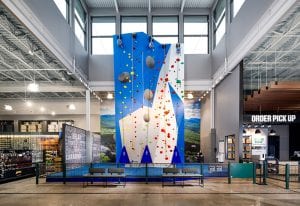 DICK’s Sporting Goods opened its first experiential retail-focused House of Sport store concept in Victor, NY, over the spring. It serves as a testing ground for experience-based retail tactics, and the most successful activations will be incorporated into other DICK’s locations.

Among the store’s experiential touchpoints: a 17,000-square-foot turf field and track that is open year-round for practice, and features an ice-skating rink during the winter. Concept-store visitors can also scale a 32-foot-tall rock-climbing wall, take swings in a batting cage featuring HitTrax technology, hit balls in tech-simulated golf hitting bays and putting greens and test out and repair gear within a designated service area. The location also offers food, juices and PowerBars, and allows consumers to schedule appointments with local wellness experts. A second concept store will open later this year in Knoxville, TN.

DICK’s also rolled out experiential elements within its existing stores. It recently redesigned nine of its Golf Galaxy locations and added enhanced technology and experiential touchpoints to 62 more—things like golf simulators and putting greens, custom fittings, golf lessons from certified professionals and hitting bays. Its soccer shops will also get an experiential makeover with the addition of specially trained soccer experts and soccer trial cages.

According to foot traffic data from retail analytics firm Placer.ai, visits to the House of Sport concept store have thus far “significantly outpaced” stops at other DICK’s Sporting Goods stores in the area, with 93.5 percent more visits.

LEGO has always been a hands-on brand so when it unveiled a retailtainment concept at its New York City flagship store over the summer, it came as no surprise. The personalized, physical-meets-digital format will be replicated at more than 100 stores worldwide in the coming year.

Among new features introduced at the NYC flagship are the Brick Lab, a 20-minute experience featuring technology that brings walls, floors and ceilings to life with animated content, lighting, sound and music. Participants meet the characters on screen as they build their own creations, scan their build and then watch them become a “living” part of the Brick Lab. There’s also The Tree of Discovery, an installation comprised of more than 888,000 LEGO bricks which features a vivid rainbow trunk that houses Easter eggs and touchpoints like mini vignettes, kaleidoscopes and picture viewers from DUPLO, Technic and the LEGO System in Play bricks.

Inside the Personalization Studio, more experiences await. Like the Mosaic Maker, which captures a visitor’s image and creates their personalized LEGO mosaic portrait within minutes; the LEGO Minifigure Factory, where consumers design a mini LEGO figurine that serves as a unique souvenir; LEGO Expressions, where a digital LEGO Lady Liberty mimics participants’ facial expressions; and the Storytelling Table, which takes visitors behind the scenes of the LEGO design process and allows them to “meet” the designers through interviews displayed on surrounding screens.

“The pandemic has pushed brands from all sectors to reimagine experiential marketing,” says Jeannie Weaver, vp-retail and special experiences marketing at AT&T. “The future is anchored in the blurred lines of physical and virtual. HBO Max Orbit is just one of the 5G+-powered experiences we’ve brought to life, with more to come. AT&T is working toward lighting up more than 30 company-owned retail locations with 5G+ by early 2022 so we can bring more of these experiences to more of our customers.”

Jason Mulderig, svp-brand marketing at HBO Max, agrees. “Consumers are looking to be surprised, entertained, and educated in unexpected ways, but are also looking for virtual immersive advances to improve their overall physical experience. It leads to greater brand affinity and awareness that eventually drives sales and subscriptions.” 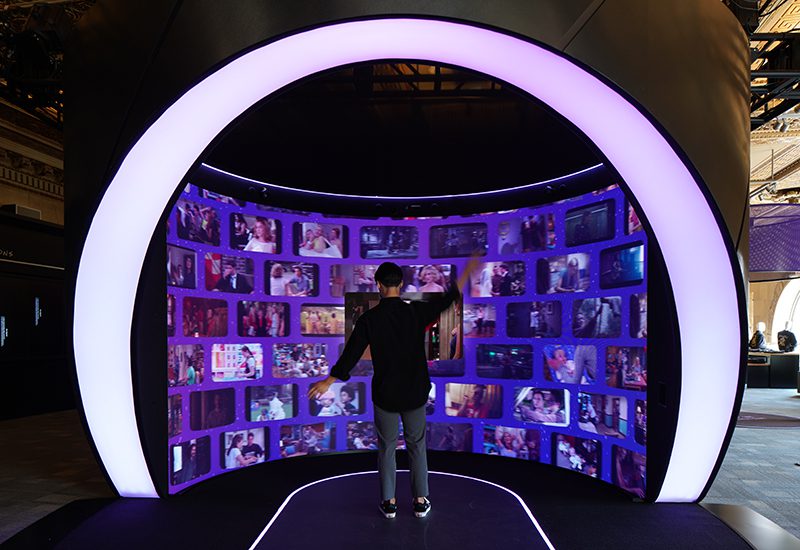 Over the summer, Wilson Sporting Goods opened up its first-ever retail location in its hometown of Chicago. The 2,247-square-foot store offers a curated assortment of sporting goods and athletic apparel, with future limited-edition items slated to drop during key sports moments. Shoppers can have Wilson rackets and baseball gloves customized in-store during regularly scheduled special events, while heritage catalog content and historical relics from Wilson’s past give the space a museum-like feel.

There’s also a distinct, leather-inspired scent permeating the space and, coming soon, Wilson will pilot Mood Media’s Mood Social offering, which will allow shoppers to interact with the store playlist at any given time. Wilson plans to beef up its experiential retail strategy by opening flagship stores in New York, Los Angeles, Beijing and Shanghai in the coming months.