Adobe BASH: Inside the After-Hours Event for Creatives 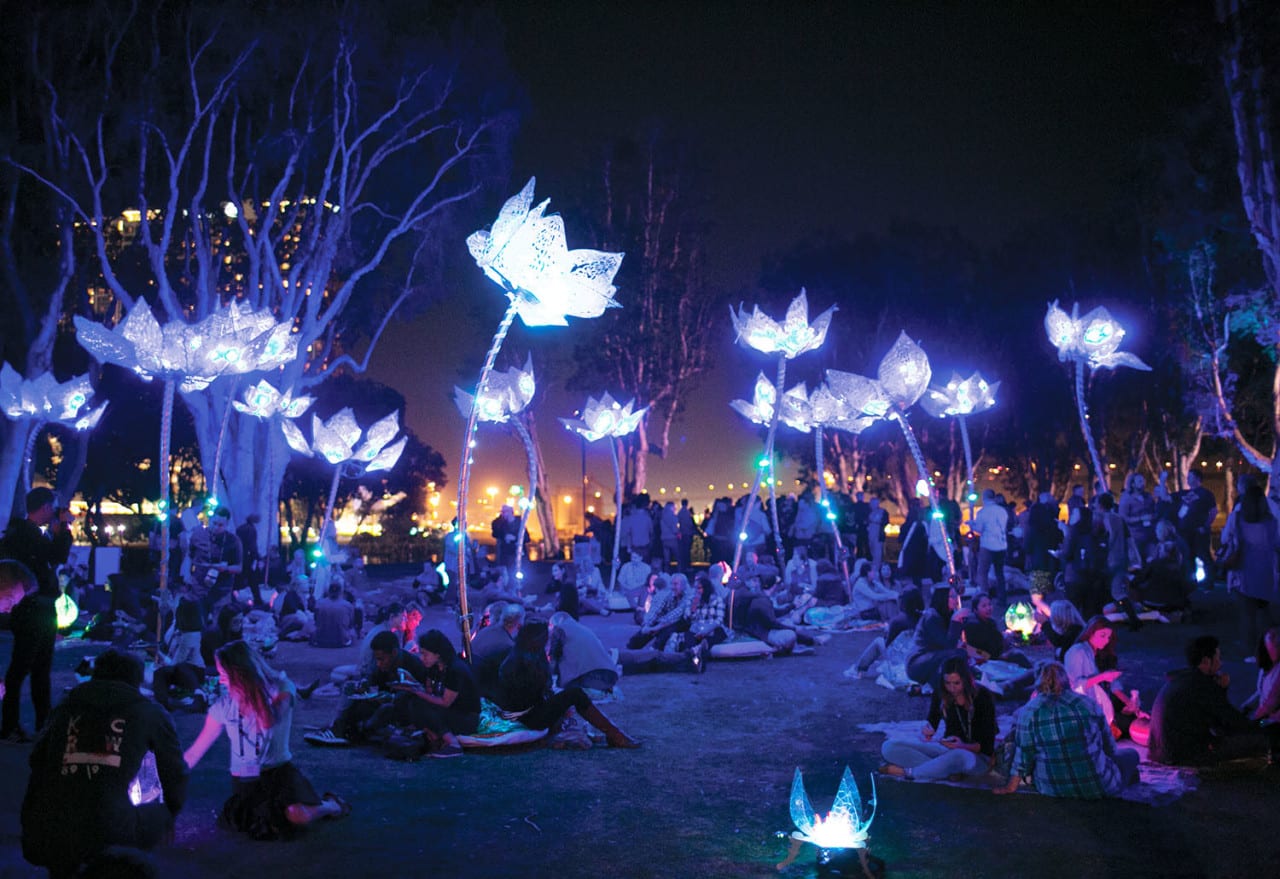 Adobe BASH: Inside the Industry’s Biggest After-Hours Event for Creatives

At Adobe MAX’s acclaimed nightlife event, even the snacks make a design statement

It was a balmy night on San Diego Bay. Lights twinkled in the distance and a gentle breeze wafted through the air. It was 7:30 p.m., already dark, and well past my usual East Coast bedtime. But on I trudged, part of a procession that had gathered outside the convention center and was now making its way toward the city’s renowned Embarcadero.

United in anticipation of Adobe BASH, we ambled along, a throng of walkers joined at each turn by hundreds more, on a great march to Marina Park, a grassy expanse that had been transformed into what was, for this night only, a three-hour Adobe-inspired celebration of food, entertainment and creativity. The BASH is one of the highlights of Adobe MAX, the annual confab for graphic artists, photographers, filmmakers and other right-brained types. And just like the conference itself, BASH did not disappoint.

“How much further?”, “This better be worth it!” and other such comments filled the air as we streamed along the landing, past the yachts bobbing in the harbor and Joe’s Crab Shack, which was closed for the evening. But there was no need to worry. Check-in was a breeze, a far cry from the long wait to get in that I had anticipated. A flash of my lanyard and I entered the fold, proceeding down a pathway lined with purple-lit trees that led to colorful art installations, the sounds of music, the smell of food and a good dose of what Adobe is all about. 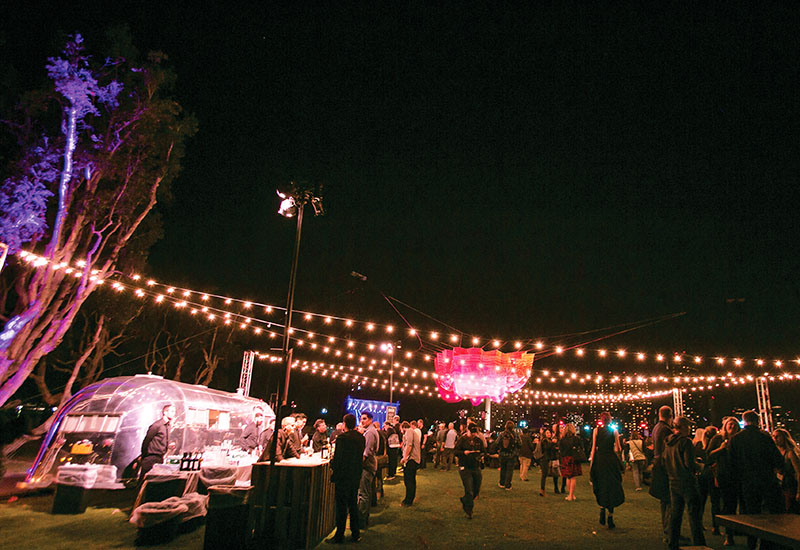 A giant surfboard rose from the ground in welcome, a reminder that this is Adobe BASH, and California, and totally cool. A giant orange tree with fire-filled rotating orbs (actual fire!) at the ends of its branches gave off a relaxed, mystical vibe. Flowers installed in an open area added beauty and an interactive element as lights reacted to your heartbeat as you offered your hand up to the blooms. People were painting, drawing and writing on an oversized Adobe MAX logo in the shape of a surfboard. Further along a school of sharks floated in the air amid a “shark tank” installation that people experienced by walking through a digital rain curtain that stopped as they entered then, once through, continued to rain again. Yep, it was clear from the start that this would be no ordinary party.

I soon made my way to the ample buffet tables where the smell of Na’an baking in a wood-burning stove proved hard to resist, along with platters piled high with shrimp rolls, short ribs, Crab Louie salad and more, all whipped up by Wolfgang Puck and his team. There was something for everyone, including vegan and gluten-free options. Then the first concert of the evening began and, after a stop at one of the multiple bars on-site, I wandered over, glass of wine in hand, to a nearby stage where The Mowgli’s, an alternative rock band from Los Angeles, was singing and jumping around to the strains of “I’m Good” and other tunes. 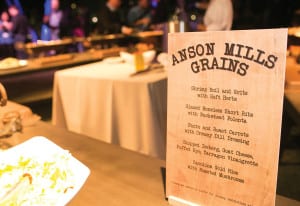 Wolfgang Puck and his team were on hand, whipping up platters piled high with shrimp rolls, short ribs, Crab Louie salad and more.

That was quite entertaining, especially from my close vantage point. Then, on a second smaller stage to my left, a live art installation of Van Gogh’s Starry Night caught my eye. I was captivated until I turned around to face a lengthy conveyor belt of desserts wending through the space, and a cotton candy tree, not far from where a Jelly Belly artist was creating a mosaic out of thousands of jelly beans.

On I wandered across the park where a giant aerial sculpture dominated the sky, a creation by artist Janet Echelman, who had spoken earlier in the day at the Adobe MAX keynote session. Her story was mesmerizing, and so was the colorful mesh configuration that hung above the park like a welcoming celestial spaceship. Along the way I passed food trucks, more bars and groups of people relaxing on overstuffed couches scattered throughout the grassy expanse.

As the evening progressed, I couldn’t help but note a connection between the party, with its creativity and interactive art installations, and Adobe MAX itself, a parallel that proved to be intentional on the part of Jennifer Heaton, senior group event marketing manager at Adobe and head organizer of the BASH.

Heaton says she always tries to incorporate three elements into the BASH—creativity, surprise and delight and interactivity, which certainly played out throughout the night and seemed necessary ingredients to appeal to this right-brained crowd. Besides the Echelman aerial sculpture, the Jelly Belly artist and live art installation recalled the Lost Masterpieces gallery at Adobe MAX.

“We’re always surprised by how people interact with things once we put them together,” Heaton says. “The attendees like to get hands-on and leave their mark.” Some actually put their phones on that dessert conveyor belt and videoed the experience.  (Can you believe?)

This year, more than 11,000 people attended Adobe MAX, and 9,000 of them made it to the BASH. And although I missed the final act of the night, a concert by Alabama Shakes that capped off this beautiful evening on San Diego Bay, I’m glad to report that I was one of them. 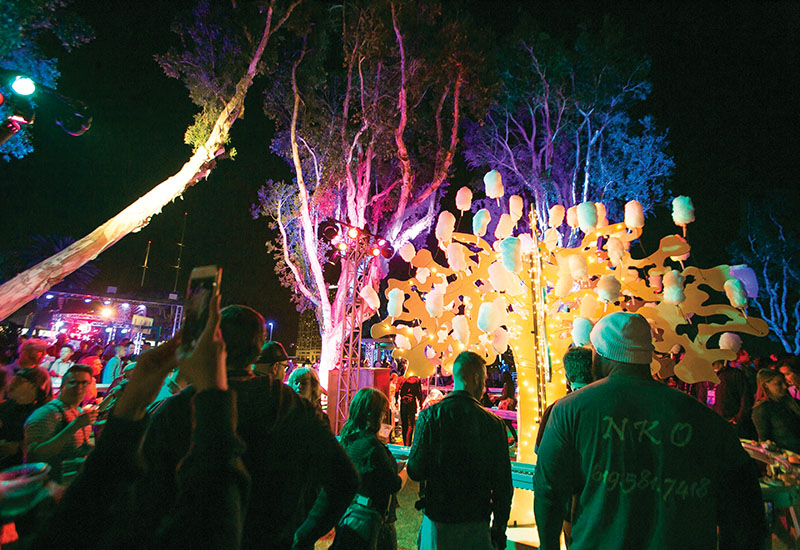 Art installations and digital interactives are all part of the Adobe BASH experience.