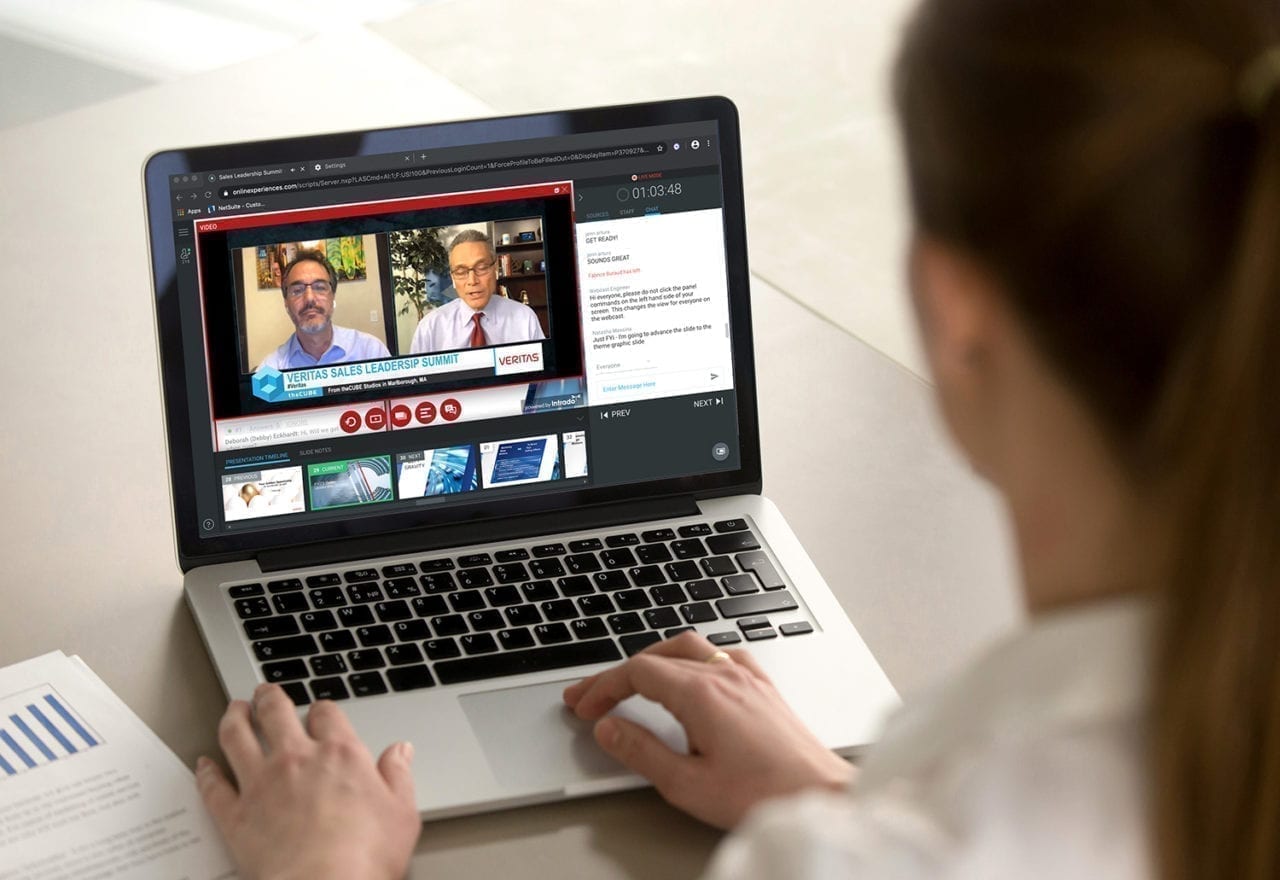 There’s an elephant in the room when it comes to many virtual events: Not all speakers are as comfortable talking to a camera or screen as they are to an audience. They can’t feed off the energy in the room when, technically, there isn’t a room. In approaching a virtual pivot for its annual sales meeting held at the end of March for 250 global sales leaders—a key event ahead of its new fiscal year that sets priorities and the overall company strategy—security software company Veritas Technologies focused on creating energy.

It began with the messaging. In the wake of COVID-19 and shutdowns, Veritas revamped the meeting’s theme to Together We Will, tied it together with a hashtag, and refocused all of the content for the meeting to reflect current business changes and economic challenges and to outline how the Veritas community, and its customers, partners and employees, were going to work together to forge ahead to achieve their goals.

The structure of the program was revamped, too. Recognizing that it’s harder to keep attendees’ attention in a virtual setting, Veritas’ event team cut all sessions to 20 minutes or less. The company also made the bold decision to do the whole event live.

“We thought a lot about the content and how to deliver it in digestible chunks, and we made sure we focused on presenters and what they needed to know in this new live environment,” says Jenn Artura, head of global events, incentives and executive briefing programs at Veritas Technologies. “That was another decision where we could have said, ‘Let’s video tape our speakers, we’ll have fewer complications, we’ll make sure we can buff and clean everything so it looks and sounds great, but there was something about being live in this sort of moment that people really needed—that personal connection and that sense of community.”

In order to pull off the live format, Veritas and partner InVision Communications crafted a comprehensive rehearsal schedule and production plan that would ensure all speakers would have what they needed physically in their environments at home (given this was taking place when strict social distancing orders and citywide shutdowns were in place). This included sending out speaker kits with microphones, lighting, backdrops, cameras, timers, Apple AirPods, as well as a speaker tips booklet. Speakers were instructed to set up their “broadcast studios” in their homes ahead of rehearsals.

“People are used to presenting on a stage where there’s lights and camera action and they’re walking around, getting that mojo going; they see the audience, they can hear people cheering for them, there are lively videos in between,” Artura says. “But when you’re talking to a camera and you can’t see anyone, and you don’t feel anyone, it’s different. And so that was something we were thinking through—how we were going to have to prepare our presenters to be able to hold the audience.”

The rehearsals allowed speakers to practice turning their cameras on at the precise moment—a critical component to a livestreamed event—and they allowed the speakers and production team to see themselves on camera and make adjustments. Having a partner help manage this remotely, given all the different speaker schedules, was critical, Artura says.

“We did so many extra practice sessions, which was so worth it. We’d schedule a half an hour but we would possibly spend that half an hour adjusting somebody’s audio, because somebody ran into an issue that we didn’t expect given every environment at home is different and the bandwidth is different,” she says. “So those things were really important to shake out , check and test and double verify, and I think because we did that, we had a lot of success in the live environment across the three days.”

Veritas made sure to let “real” moments happen, too. The event included a live Q&A that generated unexpected reactions and a few laughs, and the team had executives dress in everyday clothing rather than suits—given everyone was working from home. “It was very approachable, very human, and I think that did really add to the overall flavor of the event,” Artura says.

“We thought a lot about the content and how to deliver it in digestible chunks, and we made sure we focused on presenters and what they needed to know in this new live environment.”

Other components that added to that flavor was a give-back component, a tradition at this particular event, which was incorporated into the virtual program. This year, Veritas executives challenged the sales force to contribute funds toward COVID-19 relief. The company set a goal of $2,500, but ultimately raked in more than $50,000. The team also mixed in live dj sets during breaks that allowed attendees to stand up, stretch their legs and, in some cases, get their families involved in the fun.

“People were sending us pictures of their kids coming into their office and dancing, which was great, because that’s our reality, right—the kids are at home, they’re in the next room on their Zoom class, it was real,” Artura says.

Details, like the sounds of clapping and a cash register livened up the livestream as did pre-recorded voice overs. The team also incorporated Cameo videos into the program, including one from Kevin O’Leary of TV’s “Shark Tank,” who riffed on leadership. And the entire virtual event program kicked off with a sizzle reel of videos taken from sales leaders at home that helped convey the “Together We Will” story.

According to survey results, the story, and its messaging, resonated. Eighty-nine percent of attendees said they were engaged the entire time, and 94 percent thought the length of the sessions and event was just right. To boot, 100 percent said the company’s “call to action” was crystal clear. Cha-ching. Agency: InVision Communications. Platform: Intrado.