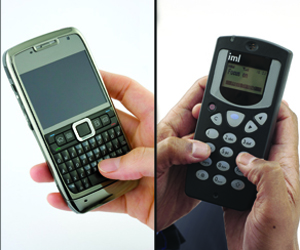 Whether you’re presenting at the premiere industry event of the year (Event Marketing Summit, anyone?) or calling for votes on this year’s “American Idol,” you want, no, you need to know what the folks listening in are thinking, and they need to know you give a damn. In the world of digital audience interaction and response tools (you’re not still using paper, are you?), there are two options: dedicated handheld systems or attendee-owned mobile devices. With a dedicated system, event organizers program the content pre-event and the handheld audience interaction device can only be used for event-specific data collection and interaction. With mobile devices, attendees use their own PDAs and phones to make their voices heard via text, or for more complex interactions, by downloading an app or visiting a mobile site with a smartphone. Before you come down on one side or the other for your next event, make sure you know what each option has to offer and what the limits are.

DEDICATED HANDHELD DEVICE
If you want to keep your audience on task and make sure yours is the only message it’s getting, or if the content is confidential and not to be made public, then a dedicated device might be the way to go for your next seminar or conference.
“The core of our clientele is holding closed meetings,” says Ray Hansen, director- East Coast at audience response system provider IML, which markets a variety of dedicated devices. “It’s very important for them not to risk the release of private information.”
Hansen says one major benefit of a dedicated system is that all the attendees will have a chance to be part of the discussion. “A mobile phone app excludes anyone without a smartphone,” he says. “And not everyone wants to take the time or effort to send a text message during a session or presentation to ask a question or make a comment.” Those problems can contribute to a lower percentage of respondents, whereas, Hansen says, dedicated response devices make a 100-percent response rate much more possible.
One dedicated device that prides itself on user-friendliness is Apple’s iTouch. With the iTouch device, enterprising brands can install a custom app that will be the only thing the device runs, thereby achieving the desired exclusivity of attention. That is the model followed by Miami-based ideasforiphone, which advocates handing out enabled iTouchs to each attendee, or having brand ambassadors circulating, if data collection or other surveying is the goal.
“For a specific event with a finite number of attendees, there’s nothing better than having your own device,” says Emiliano Abramzon, founder of ideasforiphone. “If you hand an iTouch to them loaded with your app, they’re far more likely to use it for what you want.” If they download it onto their own device, they can easily get distracted or off-task, he says.
Abramzon admits that using dedicated devices does present a problem of scale, though. “You are limited to how many people can interact with you at one time,” Abramzon says. “You cannot expect a brand to hand out millions of devices.”

MOBILE/SMARTPHONE DEVICE
To reach hundreds of attendees at a trade show, thousands of fans at a concert or millions of consumers on a national level, brands are building mobile sites, downloadable smartphone apps and promulgating SMS and MMS short codes for text and photo responses.
But piggybacking on a user’s own device has other advantages, even on the small scale. Mozes, a Palo Alto, CA-based provider of interaction systems, has implemented its web-based mobile platform at events as intimate as the Event Marketing Summit and as huge as Ford’s sponsorship of American Idols on Tour.
Dorrian Porter, founder and ceo of Mozes, predicts the mobile device will ultimately win out because of its ubiquity. “The fact that everyone has a mobile phone makes it inevitable that in the future, that will be the only device for audience interaction.”
Leveraging what people already own, he says, makes the event more interactive, makes it easier to get responses and gets attendees engaged with a device they already know how to use. “Trying to give people instructions on how to use a device at the beginning of an event can be troublesome, and time consuming,” he says. “Right now the standalone devices are pretty dumb. They’re not really attached to the Internet, they’re not allowing the wide range of interactivity being developed on the mobile phone.”
Of course, if your attendees aren’t the most tech-savvy bunch in the industry, asking them to use their old school Motorola flip phone for an interactive quiz may just end up backfiring. Bottom line when making a decision about devices: it all comes down to knowing your audience.