Throughout the last year, Mohawk Flooring North America’s offices and manufacturing facilities remained open, which meant when it was time to showcase the new products and innovations its 20,000 retailers expect each year, the company was prepared to meet the demand, but didn’t have a way to reach them. Important Q1 shows for 2021, like Surfaces, which typically takes place in January, were postponed.

Registration for the Mohawk Momentum Roadshow in all four cities sold out and, ultimately, Mohawk was “overwhelmed” by the number of customers that wanted to engage with the brand face-to-face.

To stay below each city’s COVID-19 capacity limits based on how many people could be within a certain square footage of unoccupied space at a time, the brand managed the showroom by appointment. Each appointment provided a three-hour window for attendees to visit with the sales team as well as executives roaming the show floor. All told, Mohawk had 2,500 customer appointments over the four cities. (A fifth city, Atlantic City, NJ, was originally targeted but due to employee furloughs the hotel could not ultimately commit the resources for it.)

“Going forward, the appointments may never change. We will be at all our in-person shows this year—we’re at Surfaces [which moved to June]—but we’re closing off our space with illuminated drapes and we’re literally taking our roadshow setup to that show,” says Laura Bartley, senior director-marketing, communications and events at Mohawk Flooring. “We’re going to keep the fact that you have to have an appointment to enter this space, because it has given the customers that one-on-one time with a salesperson as well as our company leadership that they haven’t had in the past.” 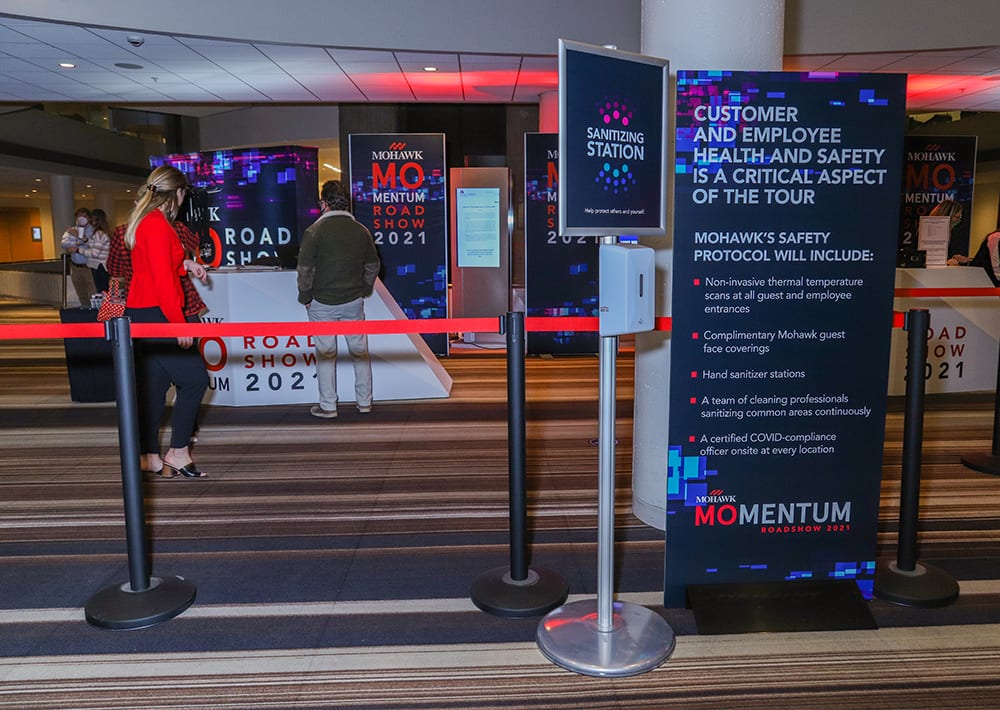 The show’s safety guidelines were clearly communicated on signage that welcomed attendees.

Most attendees drove to the road show event locations, according to Bartley, although a few attendees flew in. The brand assembled a skeleton crew team who conducted site visits and quarantined together, and were comfortable traveling and wearing a mask. Important to note, she says: No one was forced to travel if they did not want to.

Surprisingly, the pared-down format, in both style and operations, ran more efficiently. Load-in and load-out times broke records, for example. “This made it so that the focus of our entire show was on our sales and our customers, which is the way it should be,” Bartley says.

Safety precautions and methods were front and center. Before entering the exhibit hall, attendees stopped at a touchless temperature scanning station. Within the showroom, staff wielded electrostatic sprayers that would clean the entire space in two minutes and 30 seconds every hour. “We didn’t hide those things, we wanted to show them that employee safety and customer safety was a feature of our show,” Bartley says. 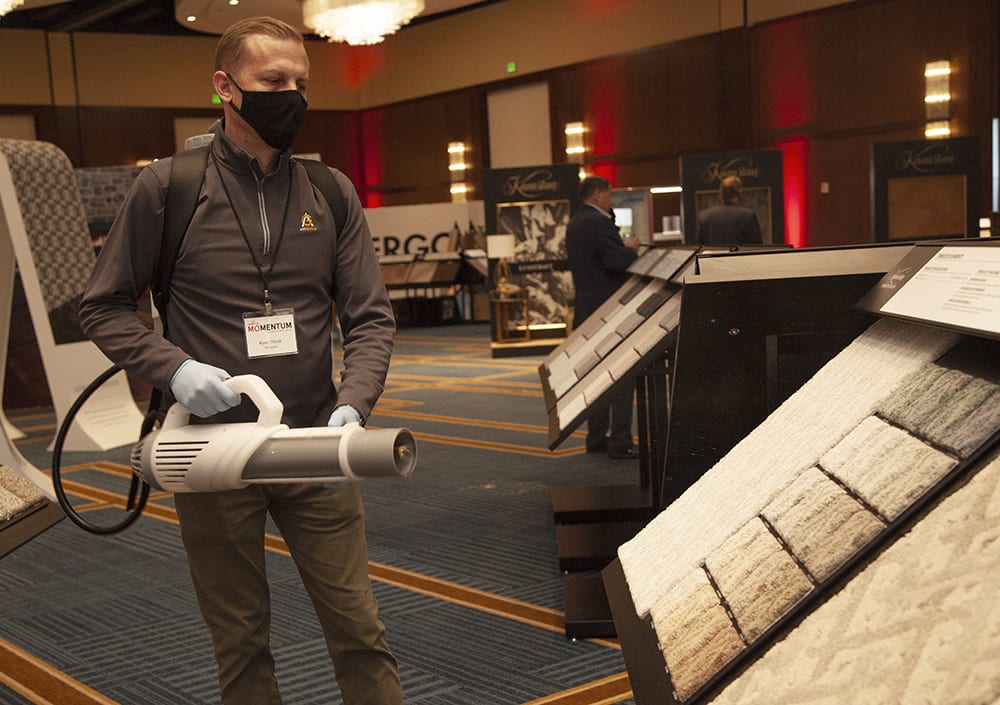 Staff used an electrostatic sprayer, equipped with hospital-grade disinfectant, every hour in the exhibition space.

The production team leaned heavily on current CDC recommendations and were required to present floor plans to the health departments in each city for approval. Looking at how major sporting events are operating as well as everyday businesses like gyms, also helped inform the plans on-site. Ryan Thiele, senior director-national accounts at Art Guild called the overall strategy one of creating “a bubble within a bubble.”

“For the showroom plans, it came down to determining occupancy for that room, so if there is a 20,000-square-foot ballroom, you can automatically take out 10,000 square feet for the structure that’s on the floor and based on what that local state’s guidelines are [for COVID-19], you determine your occupancy and then build out registration blocks based on that,” Thiele says. “That went up or down depending on where we were.”

As for mask compliance, the team took the burden off sales team members to offer reminders to customers about wearing them properly or at all (and only a few cases cropped up where these reminders were needed). Instead, the event ops team addressed any issues directly. “We had one customer thank us later for the reminder because as he said, wearing a mask is the price of doing business today,” she says.

For customers not attending in person, Mohawk provided an explorable virtual exhibit platform that helped transform the modest roadshow into one of the first true hybrid events of 2021.

Overall, Bartley points to the positive impact an in-person experience made on attendees who were excited to be back in-person safely, happy to receive one-on-one attention, and relieved to be able to conduct business, especially in a sector like flooring and remodeling which has been booming during the pandemic. 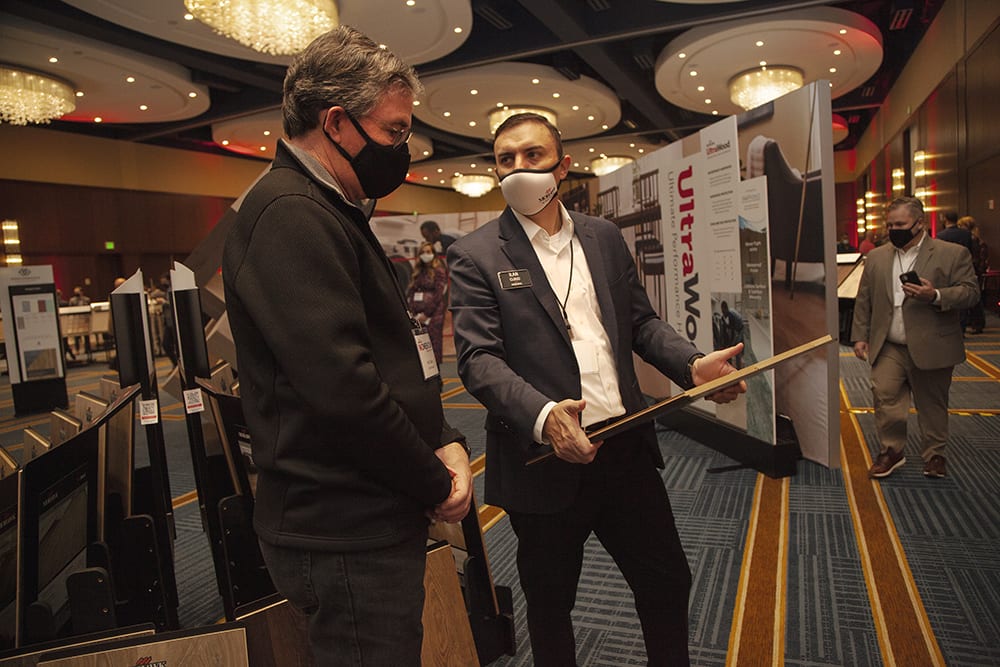 “It was great for sales, but the most important part is the fact that we think we changed the way people view our company and our brand for the long term, because they know we were there for them,” she says. “We’ll never go back to the old way of doing things. If they wanted to talk to our company president, they could. If they wanted to talk to the head of sales, they could. It was a more intimate customer-focused experience and something that we should have been doing this entire time.”

While the road show targeted the residential side of the business, Mohawk is planning a series for its commercial customers such as architects and interior designers. The brand is in the midst of building an expandable trailer that will stop in 22 cities across the U.S. this year.

“We’re going to key places and inviting our customers in those areas to schedule appointments, and we’re going to go to them safely until we can all gather at scale together,” she says.