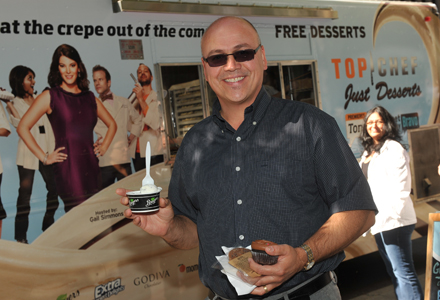 To generate buzz for the third incarnation of Bravo’s “Top Chef” series, “Top Chef Just Desserts,” the network put branded gourmet dessert trucks on the streets of Chicago, Los Angeles and New York City, and used Facebook and Twitter to disclose each location minutes before arriving at each stop. The trucks were part of a larger event program called Top Chef Just Desserts Day that on Sept. 15 partnered with 260 local bakeries and retailers in 20 markets to treat consumers to free desserts.

“Some of the things we know about our viewer is that 80 percent of them own smart phones and they’re more likely than viewers of any other cable network to have a Facebook and a Twitter page. They’re digitally savvy,” Valerie Brown, director of consumer marketing at Bravo, told Buzz. “The biggest challenge in TV right now is DVR penetration—how do we generate enough buzz and excitement to motivate someone to watch a show live? Twitter and Facebook have made that possible for us by creating a trend, an urgent topic, something that feels of the moment.”

The trucks were loaded up with a variety of treats, including Breyers Ice Cream, Extra Dessert Delights Gum and Godiva chocolates, that were distributed to consumers in busy business districts during peak lunch hours. At each location there were at least six staffers serving desserts to the lines of hundreds of people salivating for free sweets.

As Bravo had hoped, people took photos with the truck using their mobile devices and uploaded them to Facebook and Twitter, which spurred numerous conversations about the show’s premiere.

“The reason for the event was to fuel a conversation and get people excited about the show. Mobile and digital allows us to communicate and measure and reinforce our messages, but the live event is essential to get people talking,” Brown says. Agency: Grand Central Marketing, New York City.