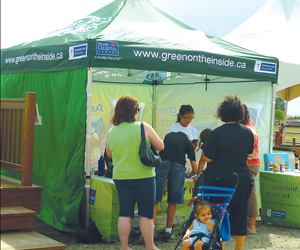 While it’s tough to compete with the Olympic Torch Relay, several brands gave it their all with pre-Olympic events that touted their connection to the games and scored an emotional connection with consumers. Though Coke takes the gold medal, the following are strong contenders for the silver. Congrats to all for a great run to Vancouver.

VISA
A worldwide sponsor since 1986 and the exclusive payment card of the Olympics, Visa brought the excitement of the Games to the subway corridor below Grand Central Terminal in New York City and to social networking channels YouTube and Facebook.
For one month beginning on Feb. 1, Visa plastered the underground passageway with 3D video and static images from its global Olympic-themed ad campaign, “Go World.” Street teams at select times distributed 3D glasses to the estimated three million consumers who passed through the subway corridor during the 28-day period. Besides the 3D video and 3D wall posters, the effort included ads on stair risers, column wraps, wallscapes, beam panels and an appearance by Olympian Dan Jansen.
Social media campaigns on YouTube and Facebook promoted Visa’s “Olympic Winter Games for Life” sweepstakes, which awarded one winner a trip to the winter games for, well, life. This year, Visa released its Olympic ads on YouTube before they ran on tv, and consumers voted on their favorite spots. Its Facebook page provided links to the pages of each of the athletes on the Visa Olympic team where the athletes provided their firsthand impressions prior and during the Olympics and recommended playlists of music they use during training that consumers could download.
“We’re here in New York because this is the highest-trafficked terminal in the U.S. and one of the highest in the world,” said Antonio Lucio, global cmo at Visa. “We wanted to see what leveraging the platform through truly innovative means like first-time 3D commercials, first-time 3D posters, sound, video and 360-degree support would do for consumers in one of our important markets.”

RBC
2010 Olympic Torch Relay sponsor Royal Bank of Canada (RBC) launched the Create A Better Canada Experience, a mobile tour that traveled to community celebrations and places of interest along the nearly 28,000- mile torch relay route. An interactive mobile “Eco Home” housed in a hybrid truck that ran on solar and wind energy and was heated by solar radiant heating served as the focal point of the experience. Tents outside the truck featured an Olympic medal display area, a snowboard simulator, a hockey rink and a green-screen opportunity where visitors could have their picture taken with the Olympic flame (GMR Marketing, New York City and Kubik, Toronto handled).
“Our theme was about creating a better Canada and encouraging everyone in every community across the country to work towards that goal through volunteering within the community, helping to create Olympic champions, living healthy, active lifestyles and taking actions at home to live more sustainably in the future,” says Gord Kerr, head-marketing, home equity and lending at RBC Royal Bank. “We wanted to inspire and enable Canadians to do these things.”
The Eco Home consisted of interactive displays organized around an Olympic medal theme that showcased sustainable living practices. The Bronze area suggested simple and inexpensive changes home owners can make such as using energyefficient light bulbs, unplugging power bars when not in use or capturing rainwater for watering lawns and gardens. The Silver area highlighted more sophisticated options such as installing Energy Star windows and more efficient insulation. The Gold area showcased the technologies of a LEED-certified home. Visitors received a “passport” with information about the 2010 Olympic Games and sustainability. The passport triggered an interactive Augmented Reality software program that transformed an ordinary house into an energy-efficient home.
The Eco Home was on display at 150 of the 1,000 communities along the Olympic Torch Relay Route until the games began on Feb. 12 in Vancouver.

MCDONALD’S
As an official sponsor of the Olympic Games since 1976, this year McDonald’s served up a menu of pre-Olympic activities along with special offerings such as Crème Brulée Crunch McFlurry, S’mores Pie and Olympicthemed sport water bottles. McDonald’s Canada offered teachers at schools that participated in a Go Active Fitness Challenge the chance to nominate students ages 6 to 14 to become a McDonald’s Champion Kid. Through the program, which debuted at the Beijing 2008 Olympic Games, 11 Champion Kids and their guardians were chosen to attend the games, meet athletes and visit cultural sites and interact with other McDonald’s Champion Kids from around the world. In the U.S., kids submitted essays in an online contest about Olympic values of excellence, friendship and respect to become a Mickey D. Champion Kid.
In a separate program, McDonald’s chose 300 of its top performing restaurant employees from across Canada to serve on the McDonald’s Olympic Champion Crew, which spent 18 to 30 days working at one of the three McDonald’s on-site restaurants during the Games.
Ronald McDonald House Charities of Canada, in cooperation with the province of British Columbia, the Rick Hansen Foundation and 2010 Legacies Now, funded playgrounds in Vancouver, Richmond and Whistler for children with disabilities.

PANASONIC
Panasonic, the official worldwide Olympic partner in the audio and visual equipment category in November launched a “One Winter, Five Dreams” online contest within its global Olympic Games website. The blog featured five athletes who were striving to win a place at the Vancouver games. Using video and photos, the athletes blogged about their experiences, including their daily training, pre-Olympic events and their passion as they pursued their dreams of becoming an Olympian.
Readers posted messages of encouragement and support. One fan blogger, a medical imaging coordinator from Illinois, won the coveted title of “Gold Blogger” along with a trip to the Games to cheer them on in person and blog about it to the rest of the world.

HAIN CELESTIAL
As Canada’s first exclusive official supplier of natural and organic packaged grocery products for the Winter Games, Hain Celestial in July launched a national program challenging all Canadians to show their green spirit by getting green on the “inside” as well as celebrating the Olympic games. So, for 16 weeks from July 1 to Sept. 7, the brand took its Are You Green on the Inside? challenge to retailers, fairs and festivals throughout Vancouver, Calgary, Edmonton, Toronto and Montreal.
At Hain Celestial’s tent at the events, consumers had their pictures taken for a massive collage of 10,000 photos of Canadian fans celebrating the healthy way of life. Fans could also visit greenontheinside.ca to post their picture. On site, staffers distributed specially created packages of Hain Celestial Terra Chips and coupon booklets with discounts on other products. Attendees could also send words of support to speed skater Kristina Groves, who partnered with the brand for this program, and the entire Canadian Olympic team as they prepared to compete in Canada.
In Vancouver, the giant photo mosaic covered busses driving around the city during the Olympics. Fans who snapped a photo of the busses were entered into a contest to win two tickets to the women’s speed skating final. “We wanted to seed the healthy message of the games,” says Claire Byrne, brand manager at Hain Celestial.
“We know people are more environmentally conscious and they are doing things like recycling more and composting their food to have an impact on their outer environment, but we realized people aren’t really taking that step to monitor their inner environment. The message was about healthy eating habits.” EM