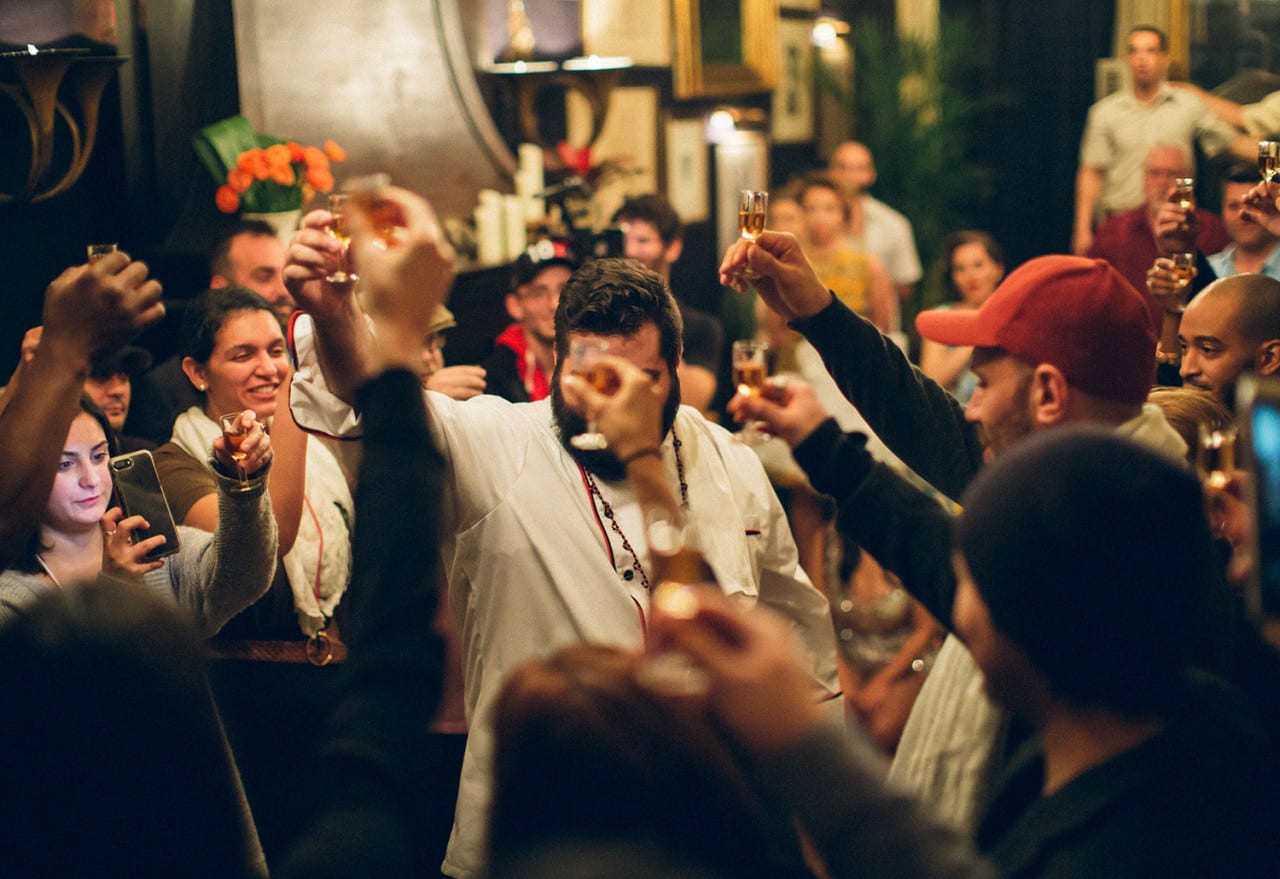 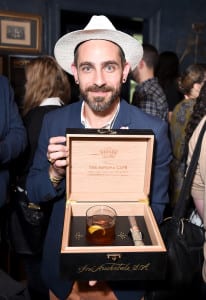 Havana Café cocktails were served in custom, branded cigar boxes and accompanied by a Padilla cigar.

“This is your key to the back door,” we were told, and handed skeleton keys to wear around our necks. It was a hint that the immersive theatrical experience we were about to take part in was exclusive, authentic and “the real thing.” Presented to a group of tastemakers, bartenders and media on April 3 and 4 at Bill’s Townhouse in Manhattan, the event recounted the story of the real Havana Club rum: stolen in 1959 by the Cuban government from its creators, the Arechabala family, and resurrected by Bacardi in 1994 after the family was exiled from Cuba. The play, called “Amparo,” was commissioned by writer Vanessa Garcia to tell “a story of true human spirit.”

Immersive theater is an event strategy that can create a strong, emotional connection between audiences and a brand. But in this case, communicating the actual story of the Arechabala family’s rum, the Cuban government’s theft of the company during the Revolution and the sale of the “real” recipe to Bacardi was best understood through this medium, says Havana Club brand manager Chris Ha. “As people are looking for more authentic stories with their brands this is something that we truly want to be able to tell… and you can’t do it in 30 seconds or a minute,” he says. “You actually need to lock in a consumer for an hour to be able to experience the whole thing themselves.”

We began our journey at a pre-show cocktail reception at Bill’s bar, which had a sophisticated, vintage feel. Concoctions made with Havana Club rum were served. If you happened to order the Havana Café, made with Havana Club Anejo Clasico Rum, Martini & Rossi Rosso Vermouth, Cold Brew Coffee & Demerara Sugar, your beverage was served in a custom, branded cigar box and accompanied by a Padilla cigar. The boxes, which read “Rum, coffee and a cigar…The perfect combination of three Cuban classics,” were repurposed by the bartenders—but guests kept their cigars and the cocktail, of course. Attendees were encouraged to post on Instagram with the prompt “Share our spirit and our story,” using the handle @TheRealHavanaClub and hashtags #TheAmparoExperience and #ForeverCuban.

The production began when our narrator, dressed in a chef’s outfit, emerged from the nearby kitchen to introduce himself and his musicians to the crowd. Some frenzied singing and piano playing ensued, but it was abruptly cut short. This was not the real music of Cuba, he explained. In the story we were hearing that night, however, we would listen and learn about the authentic Cuba—not the tourist version. After all, we had the keys to the back door.

First, we were ushered into a high-ceilinged room where the character of Jose Arechabala, original creator of the Havana Club, recounted his journey in 1862 to Cuba from Spain (a handy timeline and playbill was gifted to attendees at the production’s end), while sweeping the floorboards of a boat. Ocean sounds emanated from hidden speakers, and visual projections of the sun reflecting against water swayed overhead, transporting us to the beginning of this family’s story. 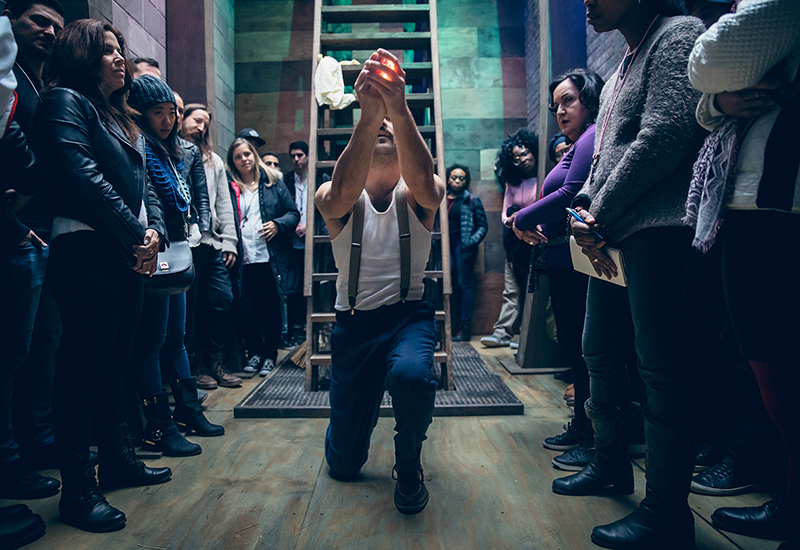 High-caliber actors helped elevate the authenticity of the theatrical experience.

Next, we entered the venue’s main space, where groups of about a half a dozen attendees were each assigned a spirit, or character, who would guide us through the narrative. Shrouded in transparent white cloth and holding candles, the spirits lay dormant and could only be revived with the aroma of Havana Club rum. All the while, musicians played Cuban music in the background—far different from the tourist version we first heard—immersing guests in the Cuban scene. Another touch that transported attendees: the use of Spanish dialogue. Particularly during scenes of intense conflict, actors might recite several sentences in Spanish followed by a short explanation in English. The target demographic for Havana Club skews Latino, but for native English speakers, it added to the immersive experience.

Our guides adopted, the setting abruptly shifted to a 1950s Cuban club. One group began to learn dance steps with a Cuban dancer, while my crew was taught a refrain from a song to be called upon later. Real family photos from the Arechabala family decorated the room (I later learned upon questioning), and periodically guests were asked to guard characters’ keepsakes—from a ribbon symbolizing Jose’s dream to live in Cuba to family heirlooms the characters feared would be taken by the Revolutionaries. One attendee was even pulled aside to help count stashed-away cash—actual money—before the soldiers came in. My comrades and I found ourselves crowded in a bathroom at one point, hiding from the authorities. Later, the family’s exile saw us gathered closely together in the dark, holding each other’s hands and beginning to sway—as if floating on a boat heading away from the island, never to return.

Emotional connection was a goal, and in that, Bacardi truly delivered. A key detail that brought it home and really upped the authenticity factor were the actors’ superb performances. Every cast member playing a main character was of Cuban descent, with some having moved to the U.S. quite recently, according to experiential agency TEAM Enterprises. What’s more, they all had a personal connection to, or story about, being in exile. Ha hopes that “Amparo” will be viewable to the public through a consumer-facing production in the future, after the brand has a chance to incorporate feedback from tastemakers and bartenders—the spirit’s future storytellers. It might take consumers a few runs through the production to piece together the Arechabala Family’s tangled past, but it will likely be worth the reentry. Agencies: TEAM Enterprises, Fort Lauderdale; Juggerknot Theatre Company, Miami, New York City; Everlast Productions, Fort Lauderdale.

Relive the Story Behind the Original Havana Club Rum: