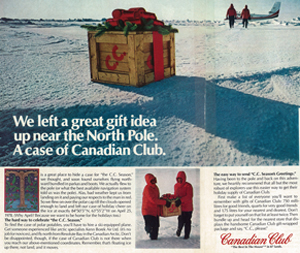 Making consumers work to be part of a brand engagement seems counterintuitive, but brands like Canadian Club Whisky, Starwood Hotels and Red Bull are doing just that.

The secret to their success is a modern twist on an old idea—a scavenger hunt that integrates the web with the real world for a series of branded experiences filled with clues, chases and great prizes.

Red Bull led the way last year with its Red Bull Stash program that sent its Facebook fans out into their local communities to solve clues that led to secret stashes of Red Bull Energy Shots. This year, Starwood Hotels rolled out a 10-day social media scavenger hunt with 200 free weekend nights up for grabs to the 100 quickest and cleverest clue solvers. The “Passport to Free Weekends” hunt was an extension of the existing Starwood Preferred Guest (SPG) Free Weekends promotion. Clues began going out via Twitter and Facebook on May 12 to lead SPG members to find the daily prize in a particular Starwood hotel in one of the nearly 100 countries where the brand has a presence. When a participant solved the daily clue, he or she claimed it at the front desk of the destination hotel, where the first 10 got a “passport” photo taken for the brand to post online. Each day, the chain awarded those 10 sleuths with two free weekend nights to be used at any of its 920 properties across the globe.

The real early adopter is Canadian Club Whisky, however. In 1967, the spirits brand began hiding cases of the whisky in remote locations throughout the world and sponsoring hunts for the cases (some were never found). This year, the Hide A Case hunt, one of the longest-running spirits promotional campaigns, is back and inviting consumers to help find one of those lost cases, missing for more than 40 years.

Puzzles and clues are solved online for the preliminary competition, which began May 17 and continues until July. Competitors of legal drinking age register at hideacase.com and each week they are challenged to solve a puzzle, which, if answered correctly will earn them 10 points and the right to proceed to the next round of competition. To get through the preliminary round, consumers have to rack up at least 50 points from the six weekly puzzles; those who do, move to round two. So far, about 13,000 people are feverishly working to solve the online clues, but players can join any time and solve the previous week’s clues to catch up.

In the second stage, consumers must create and post a video illustrating why they should be chosen to join the live expedition to find the case and get their shot at winning the $100,000 grand prize. In July, the 30 best videos will go up online for popular voting and before a panel of judges in order to narrow the field down to four Americans and four Canadians.

Finally, in the final showdown in April of 2011, those eight adventurers will head off into the wild to compete against one another in a series of scavenger hunts and trivia challenges designed to reveal the location of one of the few remaining hidden caches of whisky. The catch is: not even Canadian Club knows if it’s still there, though three executives know where it is supposed to be. If the expedition is unlucky and the case is gone, the winning hunter still gets the prize money. Canadian adventurer and television personality Kevin Brauch will helm the final hunt, wherever it will be.

Over the course of the past 43 years, 25 cases of the brand’s whisky have been dropped around the globe. They have been found at Mt. Kilimanjaro in Tanzania, Angel Falls in Venezuela, the Swiss Alps, California’s Death Valley and atop a skyscraper in Manhattan. Only 16 of the cases have ever been located, to the brand’s knowledge.

“This program resurrection is reaffirming the adventurous identity of Canadian Club,” says Michael Cockram, senior brand director at Canadian Club, and one of the few who knows where the case is (he wouldn’t tell us). “We want to get people re-involved in the brand and this hunt helps them get engaged with us in a much deeper way than online or print advertising. We want to get people to chat about our brand again.” Cast off, ye lubbers!   EM