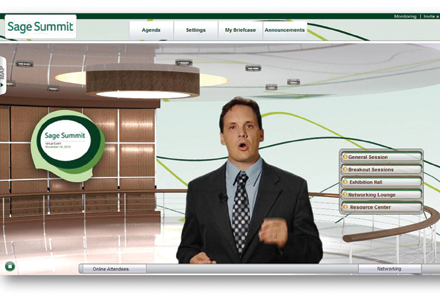 Making a Virtual Event a Community

Most event marketers who weathered the recession will tell you, there are no sacred cows anymore. Even the industry’s oldest legacy shows and events are being reevaluated. And that’s nowhere more evident than in the world of customer and user conferences where brands ranging from high-tech to heavy equipment are realizing that it’s more cost efficient to either streamline multiple annual events that reach the same audience into one, or combine similar audiences at the same event and share expenses. The challenge, of course, is to create an event that still speaks to each unique audience.

Until this summer, business management software provider Sage North America had been executing two large events in one fiscal year—Sage Insights in the fall and Sage Summit in the spring. Yet, the roster of trade-show exhibitors remained nearly identical to the fall show. So in 2008, Sage decided it made more sense to merge the two events into a single Sage Summit, which runs from June/july 10 to 15 at the Gaylord Hotel in Washington D.C. Though it was excited about the combined event, Sage was concerned about how much time would pass without it connecting with its customers in between events. It was critical that the company find a way to stay connected with its customer base in order to remain relevant in the market.

Its solution was a virtual event, which it not only used to stay connected with its customers during that dark period, but also used as a feedback tool to help shape the 2011 physical event. Sage could have turned to a traditional paper or electronic survey to remind its customers it hadn’t fallen off the face of the earth and to gain some feedback for the upcoming event, but Sage wanted more out of its interaction with its customers during this period to make them lifelong advocates for its products. Enter: virtual crowdsourcing.

“This is a big investment for our customers, so we really needed to make this worth their time. The virtual event was the perfect opportunity for them to tell us what they want out of our event,” says Suzanne Spear, director-events at Sage North America. “It wasn’t about selling our software, it was about selling the conference by framing it and molding it into something they wanted to hear about.”

To move forward with this new strategy, Sage hired Norwood, MA-based Cramer in August 2010 to start working on the virtual content using an InterCall-provided (formerly Unisfair) platform and on Nov. 18 launched the event. Sage’s ceo greeted attendees followed by keynote addresses from the company’s top execs with a question and answer session after the introduction. The centerpiece of the one-day, two-hour virtual event was a series of 10 90-second videos that Sage’s product managers recorded using a company-provided flip camera. The product managers were given instructions and a basic script they used as a starting point for pitches they personalized to encourage their respective customers to attend their sessions at the physical event. Directly following each pitch, the product manager reached out to attendees thanking them for tuning in to his pitch and urging them to submit their feedback. That information was then collected and reported back to the product managers to help them shape their physical sessions.

“Going into the virtual event we wanted to have 1,000 customers signed up. We ended up getting 1,361. Then the goal for actual attendance for event day was 500 and on show day we got 764,” says Spear. Of that number, 522 viewed the total of 85 video pitches with each pitch receiving 33 pieces of feedback. But the virtual event did more than guide Sage’s product managers in creating tighter breakout sessions, it opened the company’s eyes to other attendee concerns. Here are some of the other insights Sage took away from its virtual conversation:

Customizing Networking
Sage’s virtual event included a networking lounge that offered two types of networking within it: Open Chat and the Forum. It allowed Sage to customize the discussion forum by industry or product. In these discussion forums Sage asked attendees what type of a networker they were, for example, a wallflower that needed Sage to provide icebreakers like games, or an extrovert that’s big into social media or activities. This conversation helped develop the physical event’s mixed networking opportunities, such as organizing lunch tables by product. For one night of the live event, Sage hired out bars and restaurants on the Gaylord Hotel harbor and designated each to a particular product. There was also a day for unstructured networking at the Aaron Space Museum, which the company is renting out for the occasion.

Building Communities
Many of the folks engaging with each other at the virtual event ended up developing friendships and coordinating their physical event agenda together. The customized forums were broken into 11 sub-forums that aligned to a product area, which allowed customers to directly engage with fellow users of their actual software rather than the open chat where everyone chatted about a wider variety of topics. Sage had 311 customers actively engage in the networking lounge spending an average of 17 minutes at each visit. In the Open Chat it had 109 unique conversations taking place. The chats were also a great opportunity to hook up attendees with Sage employees, 500 of which attended the physical event. The virtual environment remained up for 90 days, though most live features weren’t active at that point, but customers could still access the virtual platform and view the videos.

Tangible Touches
Though the virtual event allowed Sage to tap into its customers’ ideas like never before, it also learned that its audience is still interested in having something tangible to hold on to, like downloadable information about the physical event, content from the trade-show exhibitors and PDFs of the pitch session presentations. “Our business partners are in the tech world and are more savvy that way but our customers like tangible,” says Spear. Which means that next time, they’ll get more of that, too. A customer-driven conference agenda at a cost-effective live event? Sage ideas, indeed.  EM