Then and Now: Touchscreens – Event Marketer 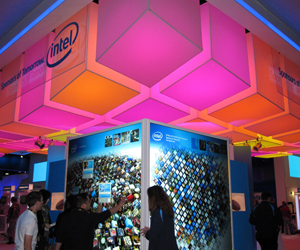 Then and Now: Touchscreens

In our new regular series, EM revisits old event marketing trends to find out where they’ve gone since we first reported on them. Are they old hats and has-beens? Or is that past up-and-comer a future best practice that’s now an industry standard? In this installment, we focus on interactive touch screens, which we first examined in October 2006.

Remember when touch-screen technology was the new kid on the block? Nowadays, if your target isn’t “in touch” with your brand, you’re outta touch.

Ah, the good old days. When brand ambassadors put paper and clipboard in front of consumers and only the Starship Enterprise had “touch screens.” Back in 2006, we reported that they were growing in popularity and were set to replace paper. Now, we know that touch screens didn’t quite replace it altogether, but it did become just as ubiquitous.

WHAT WE SAID THEN: “Adding touch screens to mobile tours, sponsorship activations and guerrilla efforts is one of the easiest and most effective ways to make an event more interactive… The technology also works well for consumers and b-to-b attendees who want to control their own product demo or experience.”

WHAT WE KNOW NOW: Brand marketers did indeed add touch screens to their events as data collection devices, interactive activities and, as the technology has gotten more and more advanced, as wow-inspiring buzz builders.

In 2006, it was Panasonic and Nokia leading the way; Panasonic with its games at the Dew Action Sports Tour and Nokia at CES with product demo interfaces. Now, Intel has taken the lead at this year’s CES with a new and improved Touch Wall. Microsoft, too, has been showing off its high-tech chops with its Surface technology consoles. And even CPG brands have gotten in on the act—Charmin and Bounty have designed a touch-based b-to-b sales solution to take on the road to clients. Here’s a closer look at all three.

INTEL’S TOUCH WALL
The seven-by-seven-foot glass surface featured state-of-the-art multi-touch technology that allowed up to five guests at a time to interact with 576 spinning, floating “info cubes” or “content snacks” made up of Intel’s tweets and photos from its Flickr stream, plus CES and product infobytes. All in all, it featured about 20,000 pieces of information, and it was all powered by just one of Intel’s new Core i5 microprocessors.

“I always believe you should have something that surprises and delights the audience and represents your brand at every event,” says Victor Torregroza, program manager-corporate event marketing at Intel. “One CES attendee was brought to tears upon seeing it and thanked an Intel rep for creating the wall. That’s what it’s all about.”

MICROSOFT SURFACE
Though it was introduced last year, Microsoft’s Surface technology is in no way old news. It, too, is multitouch, but allows the user to interact with multiple locations on a screen at the same time. At last year’s CES, the NBC Universal exhibit (New York City-based Jack Morton Worldwide handled) featured Surface tables throughout the footprint where attendees could drop a tagged matchbook to see if they won a prize and then stick around to get info on the brand’s media properties with just the flick of a fingertip. In AT&T stores, customers can set a wireless phone that they’re interested in on a Surface console and an optical tag will recognize that phone and bring up content-specific information about that model.

“With Surface, you can touch in dozens and dozens of locations; we like to call it massive multi-touch,” says Mark Bolger, a senior director on the Microsoft Surface team. “A Surface computer allows you to interact with digital information with other people. It’s no longer a solitary, isolated experience—you can now interact with more than one person at the same time.”

P&G’S HIGH-TOUCH B-TO-B
Procter and Gamble brands Charmin and Bounty worked with Manchester, NH-based Gigunda Group to develop a traveling platform that lets the company’s sales reps wow their clients while communicating all the necessary product information. The result is a 65-inch flat-screen television with a custom-built, proprietary, multi-touch software display featuring up to three interactive environments that the salesperson can “click” with their fingers to launch video, images and product specs. The technology has transformed what was once a slog through PowerPoint slides and paper spec sheets into something participatory and better aligned with the tools, technologies and devices, like the iPhone and Droid, customers are using in their everyday lives.

Where will “touch” be next year? Keep reading and find out. EM