Then and Now: 3D - Event Marketer 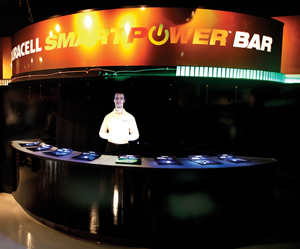 In our new Then and Now series, EM revisits old event marketing trends to find out where they’ve gone since we first reported on them. Are they old hats and has-beens? Or is that past up-and-comer a future best practice that’s now an industry standard? In this installment, we re-examine hologram technology, which we last reported on in October 2006.

Everybody’s talking 3D these days, and no image is more three dimensional than a hologram, right? Maybe not.

They were supposed to be the next big thing, and four years ago, when we looked at how Lexus caused a riot in New York City’s Times Square with its then-new IS model, it looked like a semi-transparent paradigm shift in the making. Now we know that that Lexus event was one of the best—and last—consumer-focused holograms to hit anything of that scale. Though the industry can indeed make better and more realistic holograms, there are too many obstacles to make it a worthwhile tactic, so very few marketers execute true holograms anymore.

WHAT WE SAID THEN:  “Holograms can take a product display or a marketing image to a new level, offering the target a new way to experience the brand. The latest advances in holography have expanded options from the traditional (say, a corporate logo extending out from a wall) to the stuff of sci-fi flicks.”

In 2005, AstraZeneca led the way with a full, spinning hologram of a lung at healthcare trade shows and conferences to promote its new asthma medication Symbicort. Then, in 2006, Lexus jumped in with its Times Square stunt and the U.S. Air Force followed suit with a tour that was designed to attract healthcare professionals by using holographic images of human anatomy.

Since then… not too much to report. Steve Organ, vp-production and creative services at San Francisco-based Ark Media, which designed the AstraZeneca lung, says that clients have asked for holograms occasionally since 2005, but they don’t really mean it. “Clients want it, but then later they back off and go in a different direction,” he says. Why? “Cost is the problem.”

WHAT WE KNOW NOW: Today, it seems that brands are looking for ways to get the hologram effect in more inexpensive ways. Josh Sheets, production manager at Gigunda Group, says that almost any “hologram” out there today is really a 2D image dressed up in 3D clothes. For instance, at the Duracell pop-up in Times Square last Christmas, Gigunda designed a rear-projection “hologram,” which cast its image onto a cylinder of die-cut acrylic material. This method creates a field of view out to almost 180 degrees, but the closer to straight-on a consumer is, the better it looks.

A more low-tech facsimile can be achieved through hanging a clear material upon which an image is rear-projected. This lets the image move, unlike the cylinder, which must be stationary.

But Sheets thinks there may be a place for holography in the future, even if we’re not quite there yet. “With everyone jumping on the augmented reality bandwagon, maybe the industry is ready again, despite the cost holdups,” Sheets says.

Where will holography be in another five years? Keep reading and we’ll let you know.   EM