History Brings the Swamp to the City – Event Marketer 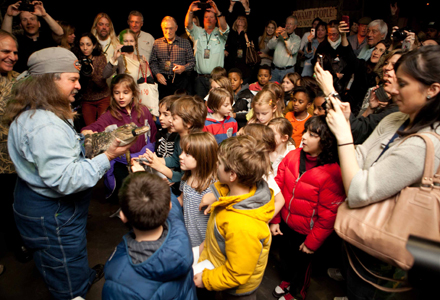 History Brings the Swamp to the City

Since History (formerly known as The History Channel) couldn’t take New Yorkers to a swamp in Louisiana, the network instead brought the swamp to life at New York City’s Chelsea Market to promote the third season of its series, “Swamp People.” The Swamp in the City activation converted a 5,600-square-foot space into a swamp filled with live alligators and turtles. The environment was complete with 6,500 gallons of water, live cypress trees and more than 1,000 live plants indigenous to Louisiana. The experience, in partnership with Louisiana Tourism, also included artisans, craftsman, musicians and food representing Louisiana culture. On opening day (the program ran from Feb. 2 to 12), “Swamp People” star Bruce Mitchell, Louisiana Lte. Gov. Jay Dardenne, Cajun Chef John Folse and Louisiana State Parks Naturalist Erin Sullivan were on-hand for the ribbon-cutting ceremony.

“It’s about the consumer experience, but it’s also about the press extension. We received lots of press pick-up, which is great because it makes people aware that the show is back,” Chris Meador, vp-consumer marketing at History, who also handled last year’s Louisiana food truck in New York City to promote season two of the show, told Buzz. “To hear New Yorkers who are generally the most jaded audience around say ‘Wow!’ over and over again has been an amazing experience. It’s exceeded our objectives.”

The experience was also a treat for local school children that visited to learn about swamp conservation. Visitors could also sign up at lousianatravel.com on-site for a chance to win a trip to the swamp. The experience concluded with a portraiture video that played homage to the people on the show. History also installed a live Gator Cam (history.com/gatorcam) so that fans could keep tabs on the gators at the event. Agency: Civic Entertainment Group, New York City; Build: Bottled Ocean, Orlando.