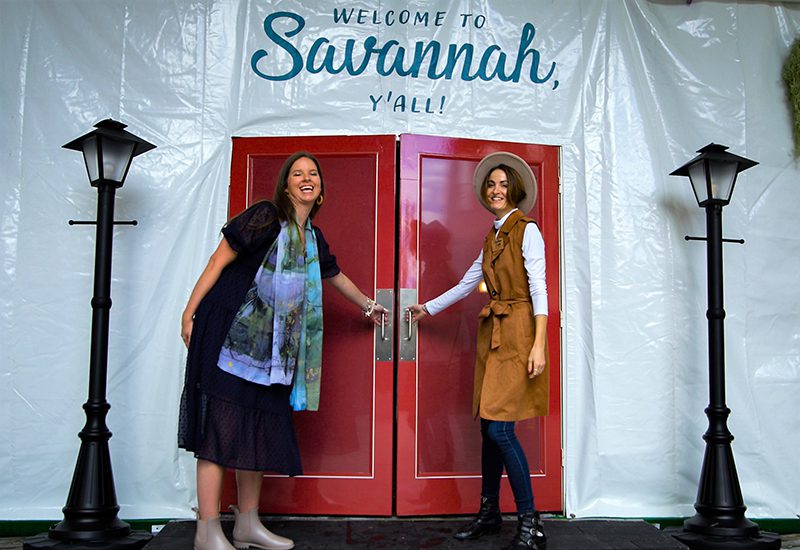 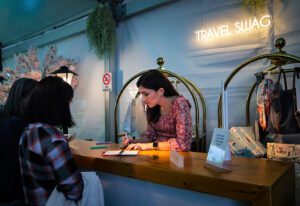 A calligrapher was on hand at the pop-up to personalize the 990 luggage tags that were distributed.

Savannah, Georgia—known for its lush greenery, historic architecture, ghost tours and coastal cuisine—came to life in New York City’s Gansevoort Plaza on Nov. 12 through a pop-up experience that gave consumers a taste of Southern charm with scenic displays, F&B samples, music and interactions with locals.

The “Surprisingly Savannah” pop-up enticed passersby with signage that read “Step into Savannah…literally” and “Savannah’s right around the corner,” as well as music from local artist Clara Waidley and oyster shucking demonstrations. A “Welcome to Savannah, y’all” graphic and brand ambassadors greeted attendees as they made their way into the tent through big red doors, and inside, they were immersed in an environment that contrasted New York’s urban landscape. Taking inspiration from Savannah’s Forsyth Park, a 12-foot by 12-foot oak tree stood tall as the pop-up’s centerpiece, surrounded by dogwood trees, azaleas, lit street lamps and cobblestone-patterned carpet.

A bar offered nonalcoholic beverages, including rosemary hibiscus lemonade and sweet tea with lemon, and served as an opportunity to highlight Savannah’s open-container policies. Attendees also enjoyed small bites and pralines from Savannah’s Candy Kitchen, with 2,000 of the sweet confections dished out by the event’s end. Fun facts displayed throughout the space and TV screens playing a 24-minute video loop about Savannah’s culture, entertainment, restaurants and even flight routes educated attendees about the city’s offerings.

A photo booth allowed participants to choose from four Savannah backdrops, and as a data capture opportunity, attendees could enter to win JetBlue certificates to fly to Georgia. An interactive wall encouraged attendees to write out what they like to do when they travel, garnering more than 1,200 engagements.

Giveaways included coffee beans from Savannah Coffee Roasters and, the biggest hit of the experience, Visit Savannah-branded leather luggage tags crafted by Satchel, a handbag and leather goods shop in Savannah. A calligrapher was on hand to personalize the 990 luggage tags that were distributed.

Visit Savannah staffers passed out insider’s guides and answered questions at a visitor information table; Savannah locals and VIPs were also on-site greeting visitors and sharing their love for the coastal city. Even Mayor Van Johnson made an appearance and took selfies with attendees who were excited to meet Savannah’s mayor.

“Surprisingly Savannah” marked Visit Savannah’s first venture into an out-of-state pop-up experience—something Lauren Cleland, director-marketing and data intelligence, has wanted to activate for many years. As to why Visit Savannah chose New York City for its first experiential pop-up, Cleland says a summer research study identified the area as its biggest opportunity market to target and drive visitation.

To bring a taste of the south to NYC, the Surprisingly Savannah pop-up offered oyster shucking demos.

“That study really showed that markets like Atlanta, per se, are markets that are coming to see us whether we market to them or not, so if we spend incremental funds, we aren’t necessarily seeing supplemental visitation,” she says. “On the flip side, New York City, where we get a lot of visitation from already—it’s our top flight market—there’s a ton of room still left to grow because of the sheer volume of individuals who live in New York. …  We consider them to be very high-value customers.”

The single-day activation—promoted primarily through social media and influencer partnerships—was part of a larger hyper-focused New York media plan, with messaging across out-of-home media and display, native and CTV advertising, as well as a weeklong p.r. campaign. Ultimately, “Surprisingly Savannah” had a 400-plus attendee throughput rate per hour and over 3,000 high-touch attendee engagements. The event earned the single-day record for highest pedestrian foot traffic on Gansevoort Plaza in 2022.

“With that in mind, we want to prepare for larger crowds in the future and just learn how to make the guest experience even better—what that means for food and flow,” Cleland says, adding that she hopes to take the pop-up on tour in the future. “Wherever we go, I’m just excited to do it again, bring magic to people, make them smile, add some surprise and delight to their day, and hopefully inspire them to come to a really special city.” Agency: Engage and Resonate.