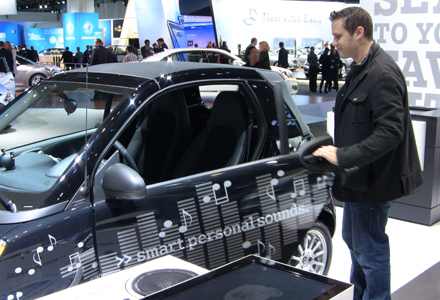 Smart makes one of the smallest production cars in the market. But belying its stature, the brand went tall and broad with its exhibits at this month’s North American International Auto Show at the Cobo center in Detroit. The brand kept its little efficient cars in the spotlight, not taking focus away, but enhancing the fun with simple, neat coolness. The best interactive was designed to highlight the consumer’s ability to customize everything about the Smart experience by showing just one feature. Every sound the car makes, that’s right, every annoying bong and ding, can be set to the driver’s own preferences, be it music, or sound effects or recorded voice. To demonstrate, one need only open the car door to hear the first four notes of Beethoven’s Fifth Symphony, or put on the turn signal to hear Vivaldi instead of a tick-tock. To get a sense of some other sound themes, the brand placed an interactive touch screen next to the car with samples galore. Smart also had the only mobile device charging station anywhere on the floor, which was very popular, unless you needed a micro-USB charging port.
Another cool interactive included two touch screens loaded with design specs and drawings for Smart’s electric scooter and bicycle prototypes, which were prominently displayed at the front of the booth. What could have been a very nice, but boring, lounge area was made sleek and functional by some multi-touch table tops that swiveled for different views and offered photo, video and text information about Smart’s new line of cars and all the techno-intel anyone could want. This was a sweet little oasis in a very busy show, nicely leveraged to help advance the brand message in a fun way.