On the road with the Olympic Torch - Event Marketer 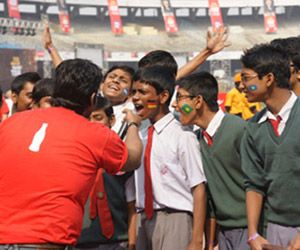 On the road with the Olympic Torch

When the Olympic flame on Feb. 12 lit the cauldron at BC Place Stadium, site of the 2010 Winter Olympics in Vancouver, it symbolized peace, hope, inclusiveness, equality, joy and fraternity to viewers around the world. To Coca-Cola and RBC, presenting sponsors of the 2010 Olympic Torch Relay, the flame represented all that and more: the challenge of carrying it safely 45,000 kilometers across Canada for 106 days to more than 1,000 communities and touching more than 90 percent of the Canadian population along the way.

The flame was lit last October in an ancient ritual in Olympia, Greece, the site of the first Olympic Games, in which a mirror focused the rays of the sun to start the fire. After a short run through Greece, it arrived in Athens where it was placed inside a miner’s lantern and sent on a transatlantic flight to Canada where 12,000 torchbearers carried the flame through cities and towns from Victoria to Vancouver as citizens cheered. In between the more populated areas it was transported by car, ferry or plane.

Torchbearers carried the flame up mountains and across rivers, down city streets, over footbridges and through national parks. They carried it on canoes, horse-drawn carriages, cross-country skis, kayaks, mountain bikes and tractors. The flame visited 119 Aboriginal communities across Canada where more than 300 Aboriginal youth, elders and athletes participated as torchbearers, flame attendants or honorary elder fire keepers.

It all added up to a program as carefully choreographed as a figure skater’s quadruple toe loop. And just like a champion, the relay delivered a solid gold performance, thanks to the expertise of several partners: Atlanta-based ignition, which has organized six Olympic torch relays since 1998; Coca-Cola, a seven-time sponsor of the relay; Bell Canada; the government of Canada; Bombardier and Hudson’s Bay Company.

A team of 55 including Vinet and Olympic Torch Relay operations manager Josh Luetkemeyer, an ignition employee, traveled with the torch, executing 11 to 14 hours of activation daily. To some extent, this relay followed the same format as those before it. Each day began with ceremonies around 8 a.m. as the first torchbearer took off, although the team had been up and at ’em well before that. Community celebrations held at lunchtime and in the evenings included local celebrities and the Olympic cauldron on stage, entertainment and a Coke “moment,” with the larger events taking place at night.

During the lunch celebrations, Coke sponsored an interactive recycling trailer that fans could visit to learn more about its sustainability efforts, play a “green” trivia game and learn how clothing can be made from plastic bottles. In the evening, attendees could walk through an interactive exhibit of Olympic torches, learn about current eco-minded torchbearers and play a polar bear video game.

Even with several relays in the portfolio, ignition president Mike Hersom estimates that only half of the plans and strategies get carried over from one relay to the next. “The last 50 percent is written within the local context, the local culture and the local laws, the government and the organizing committee,” he says. “What you can do in some vehicles in some countries is different from other countries and that transcends out to other activational things we do. You have to constantly tweak what you did the last time and totally re-write and adapt that playbook to the country you are in. There are definite similarities but there also are huge differences that go into the strategy and planning phase.”

This year’s relay is the coldest and longest in the history of Olympic torch relays to date, which presented a whole series of new challenges. The sun rose late and set early, the weather could be brutally cold and the team needed to be kept fit, warm and well fed. “A huge part of our training focuses on morale, keeping the team motivated to do a very difficult program for over a hundred days,” Hersom said.

To keep staffers motivated, Hersom made sure they had wholesome meals, rest days and threw parties on Christmas and other holidays. A morning huddle served as a daily briefing and an opportunity for a group hug and cheer to start the day. Top-quality waterproof boots, thermal liners, gloves, hats and apparel from Hudson’s Bay Company, much of it made with fabric derived from recycled Coke bottles, helped them brave the elements.

Sustainability was as major theme of the relay. All the premiums, including one million Coke pennants on 18-inch sticks that fans wave at the torchbearers and 250,000 translucent glow bottles for waving at night were made from 100-percent recycled plastic. The team traveled in hybrid vehicles and a green team cleaned up sites and recycled everything after the torch passed through.

Besides the brand love and emotional connection, the relay provided an opportunity for Coke to get its beverage in the hands of consumers. It gave away one million Coca-Cola and Coke Zero contour aluminum bottles filled with its bubbly brew chilled at a perfect four degrees. “Not only do they experience the product in perfect condition, they get to keep the bottle as a souvenir of this moment,” Vinet says.

And from start to finish, there were plenty of those. EM