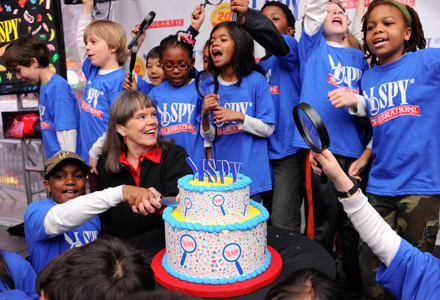 To kick off the 20th anniversary of its children’s I Spy series, Scholastic on April 13 created a publicity stunt that gathered 20 second-graders to engage in a live version of the seek-and-find activities found in the beloved book series. The publisher hand picked the New York City second-graders to compete in finding 20 objects hidden around a 12-foot-high I Spy-themed cake on Military Island in Times Square.

An emcee revved up the children by revealing I Spy riddles that prompted them to run around the cake saying out loud all the things they were finding, such as a “dog” or a “sailboat.” After the kids completed the game, the series author Jean Marzollo was on-hand to cut the first piece of cake.

“We wanted to have a signature event that would showcase what’s unique about the brand, which is this brilliant approach to seek-and-find and I Spy’s unique take on it,” Daisy Kline, vp-marketing and brand management at Scholastic Media, told Buzz. “We chose a live event to do this because I Spy is inherently at its best about cooperative teamwork and a bit of friendly competition and that lent itself to game play in event marketing in a really smart way.”

After the event wrapped, Scholastic made a donation of 500 books to the participating children’s school. Agency: The Michael Alan Group, New York City.