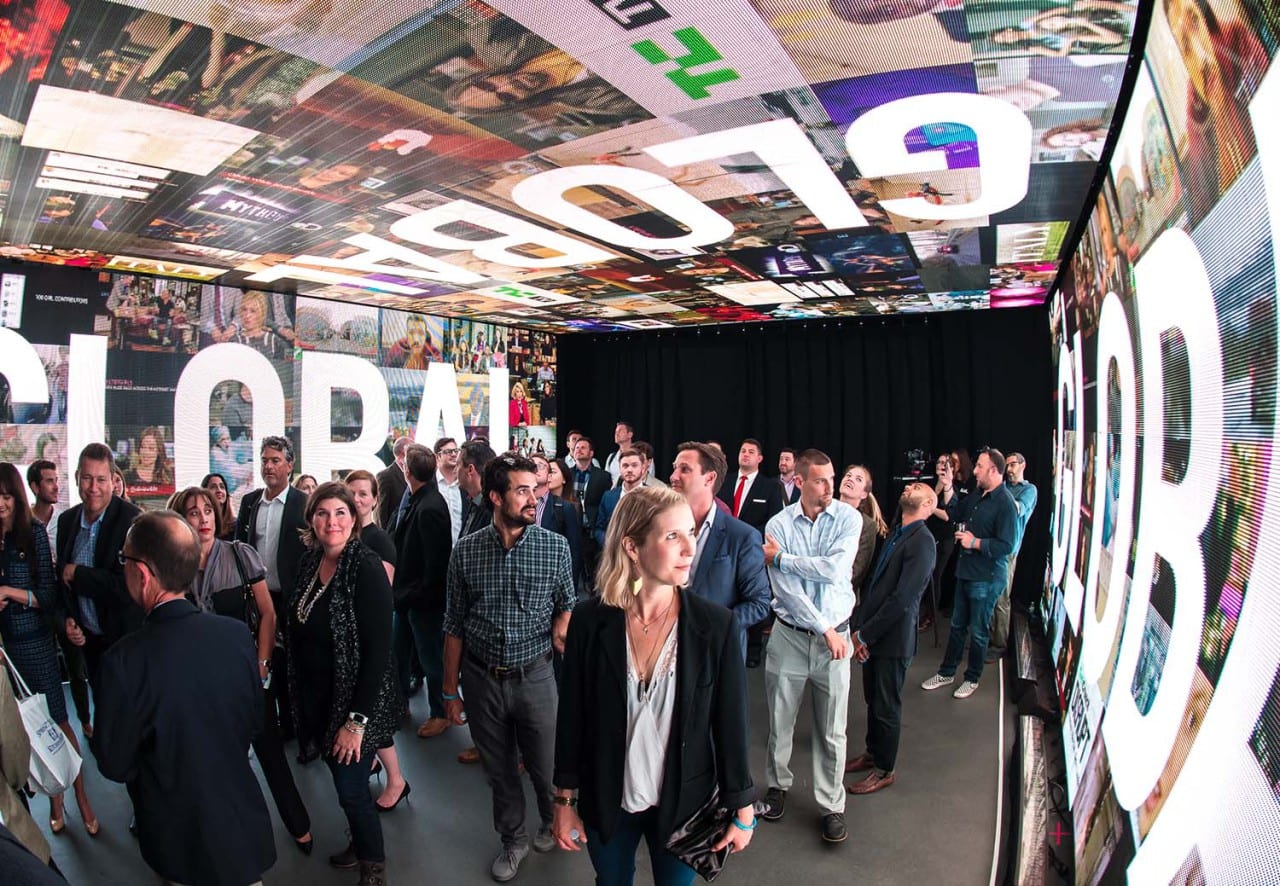 Kicking off Advertising Week in New York City on Sept. 28, AOL had a “big” story to tell as illustrated by hosting its Future Front 2015 event (a follow-up to last year’s Programmatic Upfront) at Basketball City, Pier 36. The brand wanted to paint a bigger and thus clearer picture of the industry and its potential for advertisers, while fusing together all of its partners and pieces of the company against the backdrop of some equally big news—following the purchase of AOL by Verizon this year, the launch of the company’s new mobile video platform go90.

The mobile video theme was woven throughout the massive event that drew 1,300 attendees who ranged from the c-suite to media to leaders in content and technology. While last year AOL hosted a couple hundred c-suite clients in a targeted event at Spring Studios in Manhattan, with this year’s event AOL wanted to show how big of a player it is in data and digital, and that it is behind “mobilizing the future.”

“We thought of this year as our coming out party,” says Stacy Lambatos, director of corporate events at AOL. “This year, we were acquired by Verizon, we took over Microsoft Advertising and all the while have launched new advertising products, and so we had a lot to celebrate and we wanted to get that message out to and celebrate with a larger audience this year.”

Despite the size of the event, AOL made sure everyone in attendance felt like a VIP. Welcome desks made check-in a breeze. There were drinks and hors d’oeuvres passed, like snack-able s’mores treats in slender branded tubes. An extra-long step and repeat and red velvet ropes elevated that VIP feel. And then, there was a grand entrance—the Immersion Tunnel.

About 75 guests at a time stepped into the tunnel, which came to life on three sides through the use of mounted LED screens that displayed captivating images, sounds and marketing messaging surrounding the mobile theme. As AOL ceo Tim Armstrong described it during his presentation later, our mobile devices are our “second brain.”

The main focal point of the event space was a three-story DJ Cube—a modern take on the Hollywood Squares set that was built from scaffolding and wrapped with projection screens and lighting illuminating each dj’s booth. Inside the structure, djs battled each other, played solo sets and merged their individual genres in a play on how consumers today create their own identities and personalize experiences online based on affinities.

For the main presentation and go90 launch, a roster of AOL leadership, partners and special guests took to the stage to describe how they consume and produce content—all to support the mobile message and promote AOL and Publicis’ advertising agreement for the go90 platform. This included AOL ceo Tim Armstrong, Arianna Huffington, president of the AOL-owned Huffington Post Media group, AOL President Bob Lord, pro-snowboarder Shaun White, Kid President Robby Novak and, wait for it… Snoop Dogg. Each presentation offered commanding visuals on a custom 150-foot curved projection screen that served as a big (supersized, actually) canvas for content and messaging.

Immediately after the presentations, attendees were invited to head over to two stages at the other end of the arena, one of which lit up as rock band Alabama Shakes began to perform. After the band’s set, Snoop Dogg performed on the stage next door. The performances, representing two distinct genres, tied in to the personal preference messaging that the go90 platform offers.

“I think we really did a great job of telling the story not only on the big stage, but throughout the entire event,” Lambatos says. “From the very start, you’re walking through this immersive video experience, we’re bringing the go90 talent on stage to help tell the story; the Alabama Shakes performance will be streamed on the go90 platform—everything was highly social, highly mobile.”

As smooth as the event entrance was the exit, as AOL offered black SUV shuttles and concierge services… a mobilized close to the evening. Agency: Barkley Kalpak Agency, New York City.