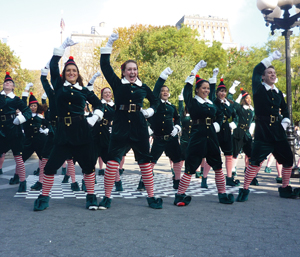 Remember the extreme Diet Coke and Mentos experiments from 2007 in which two lab-coated science guys drop Mentos mints into two-liter bottles of Diet Coke? The video depicting the resulting geysers spewing across their backyard has been viewed no less than 10 million times on YouTube and became a cultural phenomenon as it spread digitally around the globe. More recently, Nike’s “Earl and Tiger” ad on the eve of Tiger Woods’ return to professional golf (“Tiger, I want to find out what your thinking was…”) has achieved a similar distinction, garnering millions of views and spawning parodies that were viewed nearly as often as the original spot.

That viral video pass-along, which in both cases happened organically, is an event marketer’s dream, a form of visual word of mouth, and they have taken note. Now, brands like OfficeMax, H&M, Mutual of Omaha, Jockey, even the U.S. Census with its Portrait of America Tour, are incorporating video into their experiences as a way of connecting with consumers, involving them in an event and extending its impact long after the tent has folded and the truck has pulled out of town. They’re staging flash mobs, then uploading the video to the web; sponsoring sweepstakes in which participants submit videos and vote for their favorites; and setting up kiosks where event attendees can record their stories and view them online. Even more fun, consumers themselves are filming the events and posting them to the web.

Just how these marketers incorporate video into the event depends on the objective. Sometimes the goal is to create instant viral buzz by creating an event and uploading footage immediately to the web. Other times, the goal is more long-term, to create brand awareness via ongoing activities such as consumer testimonials and storytelling. In either case, there is no guarantee that the videos go viral.

“You can’t say you’re going to create a viral video,” says Bill Bonner, senior director-external relations at OfficeMax. “You can say you’re going to create a video and consumers will decide whether it goes viral or not. It could go nowhere. For a video to go viral in a meaningful way, the consumers you want to reach and be talking with have identified with it, they can relate to it and are willing to share it. It’s a form of consumer engagement that marketers are looking for.”

Some, like OfficeMax, do make that connection. Last holiday season, the office products retailer unleashed 400 elves across New York City’s Union Square to hype the return of its popular ElfYourself website, where consumers can upload headshots of themselves onto the humorously gyrating bodies of dancing elves (Grand Central Marketing, New York City, handled). Before it could upload the street campaign footage to the web, onlookers and passersby had already done so via their camera phones and Flip cameras. OfficeMax’s viral video generated more than 350,000 views on YouTube alone and generated more than 110 million impressions, and that is in addition to ElfYourself, which is a viral phenomenon in its own right. Retailer H&M deployed a similar strategy in San Francisco earlier this year with a flash mob of 55 kids clad in its apparel engaging in a hip-hop dance-off that has garnered thousands of YouTube views (Mr Youth, New York City, handled).

“Anytime you’ve got lots of people moving in unison dancing to a song, that’s pretty cool; it is interesting to look at, and you get that ‘wow’ factor from the sheer size of the group or the complexity of the dance,” says Mo Moorman, director of public relations at Jockey, which also incorporated a video strategy into a recent campaign for the underwear brand. “It is perfect for video and what a missed opportunity if you didn’t capture it.”

Jockey’s approach, like that of Mutual of Omaha and the U.S. Census, is designed to interact and engage consumers as well as create brand awareness, in Jockey’s case for its Classics underwear collection. At each stop on a mobile tour called the Jockey Classic Road Trip, which kicked off in May, it is filming attendees’ stories of their favorite road trip destinations (RedPeg Marketing, Alexandria, VA, handles). Attendees are filmed outside of the Jockey Airstream trailer, next to a classic 1965 Caspian-blue Ford Mustang convertible, via a hand-held video camera for a realistic, unpolished effect. The clips will be posted on its microsite, jockeyclassic.com/event, for public viewing.

“So much of what makes a video go viral is that it strikes an emotion in a very powerful way, whether it is hilarious, or really sad or very beautiful,” Moorman says. “We’re taking the approach that we are creating relevant content and providing that to our target consumer with the assumption that because of its relevance, he will pass it along to his peers.”

Mutual of Omaha in May kicked off a 25-city tour filming “aha” moments in which people relate a personal experience that impacted their life in a positive way. The moments are online at mutualofomaha.com/aha. On last year’s tour, 10 of those moments became TV commercials after a nationwide vote (Skadaddle Media, Sausalito, CA, handles).

“This campaign is a way for Mutual of Omaha to get in front of people in a positive and fresh way that is unexpected,” says Andrew Rouillard, vp-brand management and advertising at Mutual of Omaha. “The tour gives us an opportunity to allow people to share their aha moments. There are a lot of positive stories out there, and people want to hear them.”

And if you’re lucky, they’ll pass them on to a few thousand of their closest friends.  EM