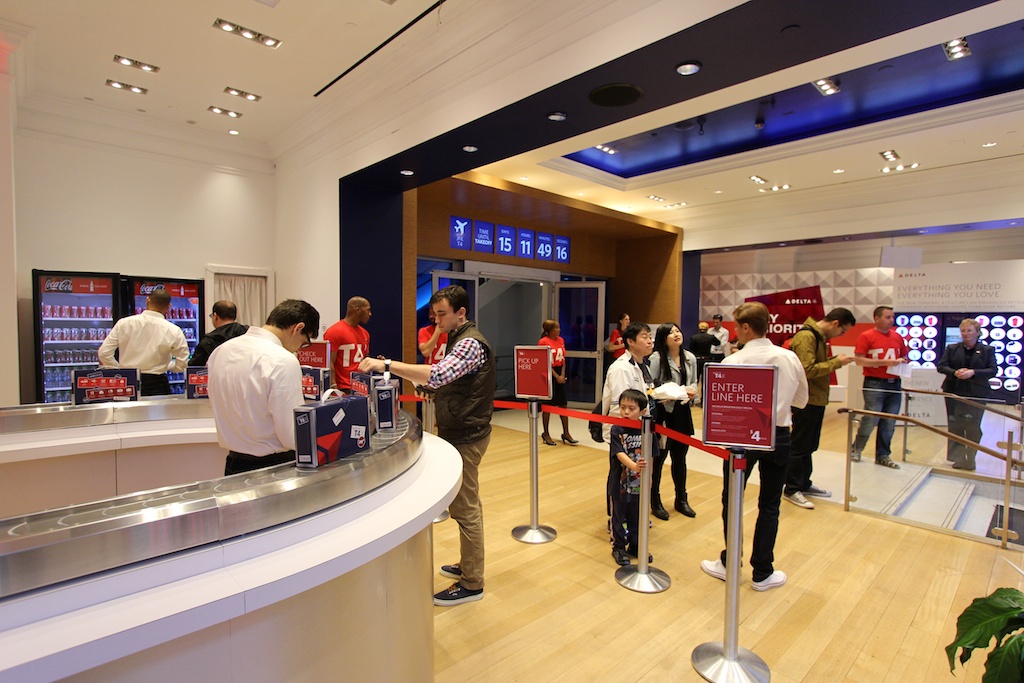 Delta Air Lines in May gave consumers a taste of what its new $1.4 billion terminal at John F. Kennedy Airport in Queens, N.Y., has to offer with T4X, a pop-up in the SoHo neighborhood of Manhattan. The new Terminal 4 officially opened May 24.

The 6,000-square-foot retail space had two levels of real-life travel experiences, starting with Delta airport staff, who assisted consumers with “checking-in” to Facebook from a custom iPad-based kiosk as they entered. The agents also assisted consumers who were actually flying with Delta that day to check-in, upgrade their seats or check their flight’s status. Consumers were emailed a “T4X boarding pass” which provided access to different stations including a digital vending machine that dispensed Delta-branded giveaways. As an incentive for checking in, consumers were entered to win an all-expense-paid trip to one of Delta’s international destinations.

Consumers could purchase lunch for $4 from an internationally inspired menu. The meals were delivered along a baggage carousel and packaged in a branded, luggage-like lunchbox. Consumers could eat or simply lounge on the second floor representing the new, elevated outdoor Sky Deck at Terminal 4, complete with projected digital aircraft flying overhead.

“Delta wanted to showcase specific innovations that can now be found at our new terminal, and how we’re enhancing the customer experience in-flight and on the ground,” Tiahanna Gierl, account executive-New York sponsorships and activations at Delta, told Buzz. “We chose SoHo, a trendy, high-traffic location, because it allowed us to give a variety of consumers a sneak-peak of what they’ll see, and can expect when they fly on Delta.” Agency: MKG, New York City.