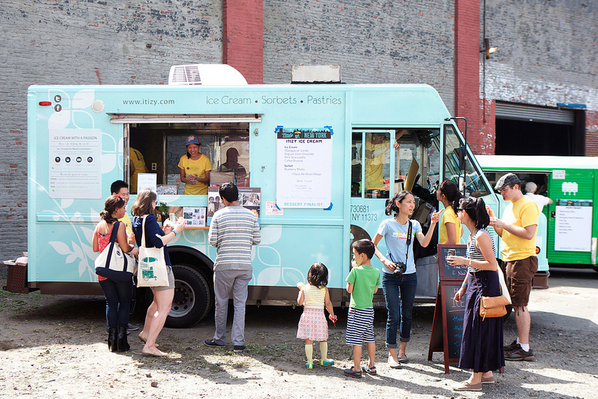 On Sept. 7, a couple thousand hungry consumers gathered in an industrial courtyard in Brooklyn, NY, for the ninth-annual Vendy Awards, a ticketed fundraiser and taste competition celebrating the top street vendors in the city. The Vendys, put on by the nonprofit Street Vendor Project, debuted in a garage in 2005 with 150 attendees. It now spans five cities, and total attendance this year is estimated to be 5,000. Here, we bring you the scoop.

WHAT IS IT: Michelin Stars. Zagat ratings. New York Times food reviews. Vendys. Wait, what? Before you giggle and discount the idea of a recognition program for taco trucks and shawarma vendors, remember that food trucks and street food have not only gained bigger followings than some permanent bistros in the same neighborhoods, they’re often backed by world renowned chefs (hence, celebrity Chef Mario Batali’s “Oscar” reference above). Originally organized as a fundraiser by the nonprofit Street Vendor Project, which provides legal and business-related resources for vendors, the event’s popularity in the food world has snowballed. It debuted in a garage in 2005 with 150 attendees. This year, the multi-city, ticketed alternative foodie event will draw an estimated 5,000 attendees.

WHO COMES: Foodies and hipsters flock to the Vendys. The typical attendee is an educated, hyper-connected influencer between 25 and 49 years old that tends to have significant disposable income. Ticket prices can be steep and range this year between $55 and $95 for adult general admission, depending on the market. Children under eight are admitted free, and it’s all you can eat and drink—booze, too—for the duration of the six-hour event.

“We have done the event on Governor’s Island for the past three years and this year we moved it to this industrial area,” says Helena Tubis, managing director for Vendy Awards. “It had this really urban feel—gritty, but gritty in a good way. It was this space where nobody’s ever done an event before and it was one of those places where if two out of the 2,000 attendees had ever been there, I would have been shocked.”

“The people who we attract travel for food, they like new places, they like new experiences, and in selecting a location that’s something we think about—that adventure of finding something unexpected,” she says.

WHAT HAPPENS: An online public nomination process leads up to the awards, where vendor finalists arrive with carts and trucks and prepare their best eats for attendees and judges. There is socializing, live music and performances and, at the end of the day, a ceremony naming winners for Vendy Cup, People’s Taste and Finalists.