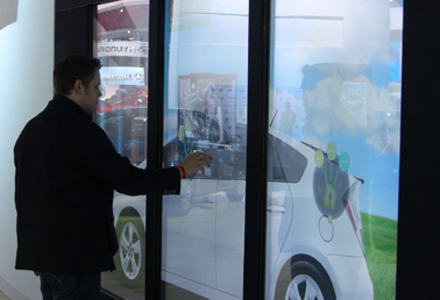 The touch screen has become a must-have tool at events these days, and no matter how it’s used, be it for data collection or to facilitate a photo or video activation, marketers need to remember that complacency leads to negative ROI. EM made it top priority to track down the best touch-friendly screens at the show, and here they are. Prepare to be impressed, ‘cause Big Auto gets it—big time.

Belle of the Ball
No sense saving the best for last, when it’s this good. Without question, the digital star of the show was the Toyota Vision wall (pictured above). The wall was made up of three 82-inch LCD panels, equipped with multi-touch technology and loaded with tons of content and features about the new Prius. Each of the three screens focused on one area of content, combining to tell the whole ownership story of the Toyota culture and the lifecycle of the vehicle. The software that ran the experience is based on Microsoft Surface, but is custom-designed.

The interface, made possible on such a large scale by way of a grid of infrared light, responded to easy, natural movements to bring up fun, accessible content in the form of videos and pictures and Easter egg-type secret features like mini videos that launched when the three panels were lined up in one image, or the ability to throw items out of one screen and see it transform into a logo or a tweeting bird on the next one. The goal, according to San Francisco-based JUXT Interactive, which designed the wall in partnership with Venice, CA-based tech agency Push, and New York City-based Hush, which created the motion graphics, was to tell the story of the vehicles in a way that would be organic and non-intrusive for consumers, but fun for them, too. For more, check out the demo at vimeo.com/18753756 (Agency: George P. Johnson, Detroit).

Finger Paints
Ford’s massive footprint was full of touch screens and other interactives, including a huge touch screen photo activation for the 2011 Focus, which invited attendees to race a clock to unscramble an image of their faces. In the “Go ahead, try and find a tougher truck than ours” category, Ford got aggressive. To tout the power of its new F150 eco boost engine, the brand set up an interactive screen as part of a table full of the engine’s technological gadgetry. By touching a few options related to torque, horsepower and towing capability, eager attendees matched the Ford up against Dodge, Chevy and Toyota trucks to see which was the toughest. (Ford, naturally, came out on top.)

The best of Ford’s touch-based interactives was the Fiesta finger painting experience. There, show-goers used their hands to pimp out a Fiesta in endless colors and with the help of several decal templates, using only the multi-touch screen. Once done, the newly created art car was added to an online gallery and sent to the user’s email. This seems simple, but it kept attendees gathered around throughout the day. People just kept refining and re-creating. Mission accomplished, anyone?

No Touch
GM got in on the touchy-feely action with an email post card activation focused on the brand’s new baby, the Volt, and as a delivery system for the most awesome photo activation at the show. There were 27 cameras, taking action shots of guests leaping in front of the new Camaro convertible, and then posting to Facebook and Twitter.

Setting all that fun stuff aside, though, GM’s star shone brightest when there was no touch at all. The “wave motion” activated info kiosks were everywhere, across all of GM’s sub-brands, and so well integrated, they seemed commonplace. And if the goal of any cool tech is to be so good it doesn’t steal focus from the content it is delivering, then GM is the Jedi of touch screen. These are the droids you’re looking for.

Smartly Done
Smart Car again surprised us with its subtle offerings. What could have been just a very nice lounge area was made functional by some multi-touch table tops that swiveled for different views and offered photo, video and text information about Smart’s new line of cars. This was a sweet little oasis in a very busy show, nicely leveraged to help advance the brand message in a fun way. We only wished it was bigger. We didn’t find much room there, thanks to the lounge’s popularity and (evoking the product) diminutive size. Size does matter, after all.