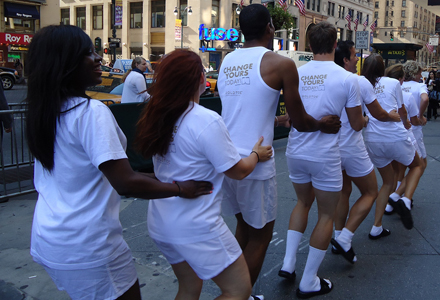 In an effort to make a big splash for its first-ever venture out of the sock market and into boxers, briefs and boxer-briefs, GoldToe took New York City by storm on Sept. 16. The brand sent brand ambassadors clad only in underwear all over the city to excite consumers about the new line and direct them to Herald Square Park where the main event was going on from 10 a.m. to 4 p.m. To build more buzz, GoldToe dressed some of Manhattan’s most iconic statuary—like the Wall Street Bull—in its new product, and sent 100 product-loaded gift baskets to key Wall Street firms. Unexpectedly, all the guerilla boxers were stolen by the end of the day.

To lend a philanthropic element to the GoldToe promotion, the brand partnered with Career Gear, a charity that sets underprivileged men up with clothes for job interviews. The brand donated $10,000 as part of the day’s Gear Up For Change event in Herald Square Park and everyone who stopped by the event to donate a piece of gently used men’s clothing got a free pair of GoldToe underwear. The event also included celebrity appearances from former NFL All-Pro player Marcellus Wiley and actor, Isiah Whitlock Jr., as well as sports-themed games and prizes and speeches from representatives of Career Gear and GoldToeMoretz.

“One of the toughest things to do is change a man’s underwear… habits,” Trish McHale, evp-marketing at GoldToeMoretz, told Buzz. “GoldToe has always been a tremendous word-of-mouth brand, and this was a great way to raise awareness about the underwear line and help to change the brand’s perception as an older-fashioned brand.” Agency: Aspen Marketing Services, Chicago.