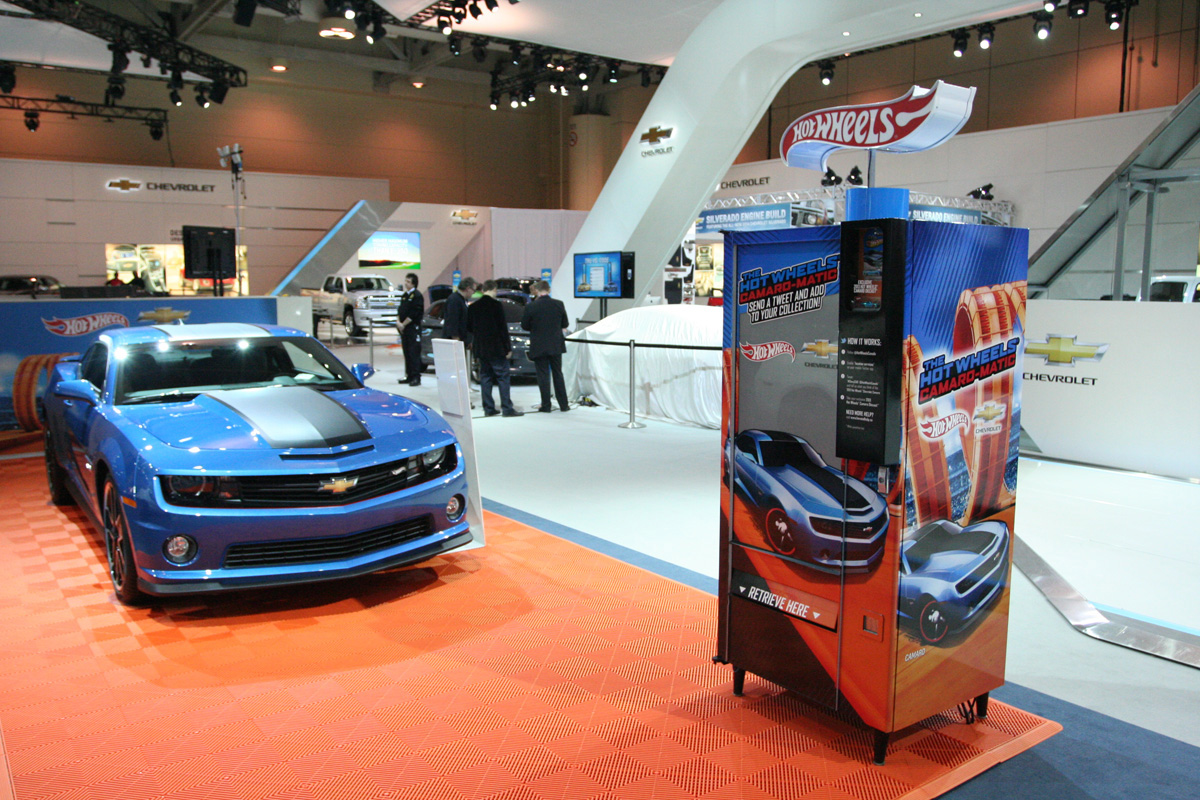 At this year’s Canadian International Auto Show, Chevrolet Canada featured in its exhibit a special Hot Wheels-inspired blue Camaro that hit the market early this year for a limited time. It was a particularly significant event for car lovers and Hot Wheels enthusiasts because one of the very first Hot Wheels toy cars ever produced was a blue custom Camaro in 1968. To honor this legacy and celebrate the automobile line, and to give consumers a chance to take one home, (in their pockets, of course), Hot Wheels maker Mattel activated a special Twitter-enabled vending machine in the Chevy booth that dispensed collectors-edition blue Camaro die-casts.

The “Hot Wheels Camaro-matic Trending Machine” was retrofitted with custom computer components and software. Consumers standing near the vending machine could tweet out what they like about the car—including in the tweet the all-important hashtag and Twitter handle, #ChevyCIAS and @HotWheelsCanada. Using geo-location the machine would confirm the user was nearby and then dispense the toy car. In addition to the standard packaging, consumers had a 1-in-2 chance of receiving the special edition Hot Wheels blue Camaro in an acrylic glass display case. Over the course of the show, the machine dispensed more than 1,500 exclusive 2013 Hot Wheels Chevy Camaro die-casts.

“We have a wonderful base of brand fans who collect Hot Wheels, but the whole idea is how do we get people into the franchise and keep them there, because we know once we’ve got them, they stay with the brand, a lot of them through the rest of their lives,” Donna Polimac, brand manager at Mattel, told Buzz. “We know that boys who love cars become men who love cars and that often the first introduction to a love of cars is through their dad. At the auto show there are a lot of new and interesting automobiles, so we needed to come up with something that would also capture boys’ imaginations.”

The Canadian International Auto Show, the largest auto show in Canada, was held at the Metro Toronto Convention Center in Toronto between Feb. 15 and 24. Agency: TrojanOne, Toronto.