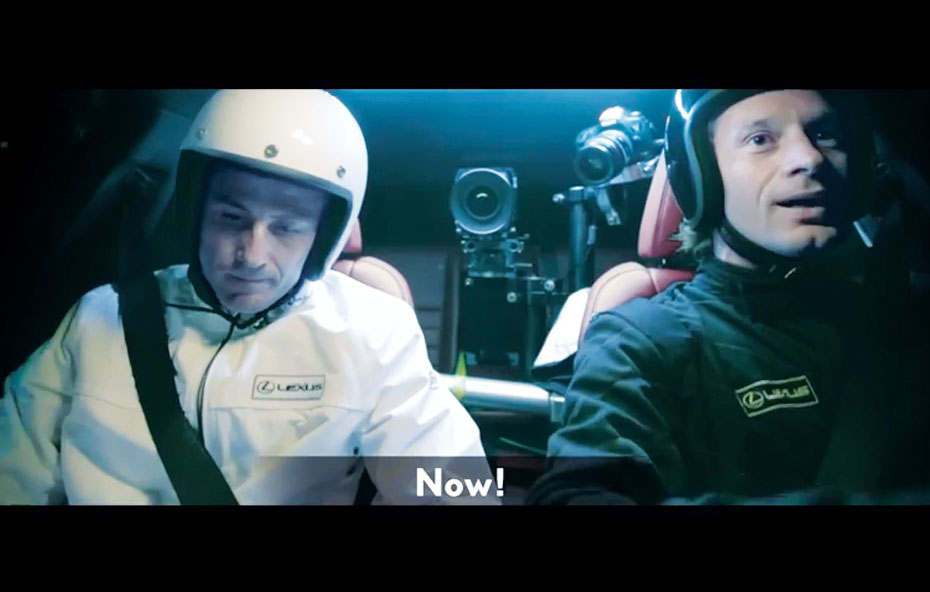 How a Lexus Italy TV Ad Became a Live Program

Lexus Italy needed a new commercial to introduce its new IS Hybrid model to a tough Italian market. Instead, the brand got way more than it bargained for, and ended up with an event program that is now set to travel Europe. But let’s back up. The program, “Trace Your Road,” brought 10 of the brand’s Facebook fans and Formula 1 driver Jarno Trulli to an empty aircraft hangar outside of Rome on July 26, where the brand set Trulli behind the wheel and the fans in the passenger seat for a race against each other that was like no other.

The hangar was pitch black, and the fans had a tablet that they used to draw a racecourse, in real time, which Trulli had to drive as fast as possible, as the roadway appeared in front of him. He had no idea what the competitors would draw, but he had to get to the end without spinning out—or crashing. (OK, he didn’t crash, but still, it was dark in there.)

“We wanted to establish the brand, showcase the hybrid and show performance all at once,” says Andrea Carlucci, director-marketing of Lexus Division at Toyota. “We thought, let’s try to make something amazing. Let’s take a risk.” (Saatchi & Saatchi, Italy, handled.)

The brand levied penalties for leaving the projected route or touching the walls of the hangar. All of the action was filmed for a television spot by New York City-based production company LOGAN, but everyone had so much fun that Lexus divisions all over Europe are asking for the experience to come to them. (Watch it here: http://tinyurl.com/ puqbt7o.) how they did it The concept for the spot grew organically, starting with the idea of users creating their own path for the car to travel. Then the Saatchi & Saatchi team came up with the idea to have the paths projected in real time, with Lexus fans inside the car and a Formula 1 driver at the wheel.

“This car is a very sensible, easy-to-drive car and the client wanted to underline the concept of fun driving,” says Luca Pannese, creative director at Saatchi & Saatchi Italy. “We connected the fun of the live video game with fun of the driving experience.”

The challenge was making it happen. The creative team knew all of the technology needed to execute it existed, but something of this scale had never been done before. Pannese began to investigate the possibilities and assemble the team that would eventually bring the commercial to life. He partnered with the production team from Movie Magic International (Milan) and from LOGAN (Los Angeles & NYC), which has had incredible viral success with its intense Gymkhana racing videos shot with GoPro cameras. New York City-based Fake Love was brought on to handle the tech side of the projection install. Then the team started figuring out what would be needed to make the concept a reality.

“Our first thought was how on earth are we going to do this thing, because we had never seen anything like it before. There was a risk that we would fail, and fail very publicly. That’s what makes these projects exciting and interesting,” says LOGAN creative director Alan Bibby, who was the live action director and the creative director for the project.

Once the team was assembled and the parameters for making it happen were established, Saatchi & Saatchi green-lit the (slightly bigger) budget and–start your engines–the commercial-turned-live experience was born.

“This was about making advertising an event in itself; to make something that was as strong as the product,” says Carlucci. “Our idea is to replicate this as an event without the need to shoot it as a commercial.”

We can’t wait to see it.

Inside the Tech:
To bring Lexus’ real-time racetrack to life, Fake Love deployed 12 20,000-lumen projectors running on fiber optic cables, all controlled by five Mac Minis. To cover the 5,120-foot by 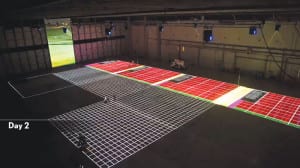 3,072-foot driving space, they deployed super wide-angle fisheye lenses for motion capture on the Lexus. They also installed high-intensity infrared lights on the car to aid in the tracking. In the end, a single pixel once rendered into digital represented about a square inch on the floor. The track was drawn in light on the floor instantly by using a custom app that allowed the user to use their finger to draw the track on the tablet. Fake Love designed the app on open frameworks, and plans on releasing some of the API so other folks can use it, too. And they did it all in less than a month. Bam.

From the November/December issue