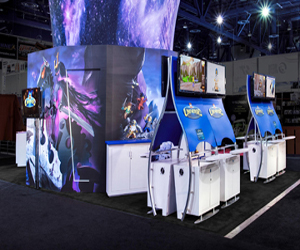 At January’s Consumer Electronics Show in Las Vegas, LEGO unveiled the LEGO Universe Massively Multiplayer Online Game (MMOG), which is expected to bring the brand to life for thousands of online players all over the globe when it is launched later this year. The toy brand’s goal is to put the focus on building and creativity, this time by bringing the LEGO brick online.

The LEGO Universe experience at CES was all about getting hands on with the game. Six stations gave visitors a chance to create a character, explore an early version of the MMOG, and do some virtual building, of course. The 20-foot by 40-foot booth was the dominating centerpiece of CES’ gaming area. The game play consoles for LEGO Universe surrounded a giant, purple sparkly vortex called the Maelstrom that represented the villain of the game, a black hole that is eating the world and can only be defeated by, you guessed it, imagination. Around the gaming area, which was wrapped in LEGO Universe branding, there were mini-figurines displaying some of the character creation options within the game. Finally, people visiting the booth could build whatever they wanted out of the ever-present LEGO bricks and then keep the creations.

In the game, players will start off by creating a “mini-fig” avatar, and then jump into an original storyline in which they are to save creativity from dark forces invading the Universe. Players will be able to have adventures, explore, meet and socialize with other fans and friends, build, customize characters and battle enemies. Each player has his or her own building area to create anything they want, brick by brick. The idea is to bring the experience of building on the living room floor into a virtual space. The sky is the limit, and players can build anything they dream up. Once created, players can bring their creations to life by adding “behaviors” to them. The behaviors system is a simple programming language that can be as simple as making a door open or sophisticated as players learn to make their own games. LEGO Universe launches for the PC in the second half of 2010.

“This is all about the consumer experience, and we have done extensive testing with fans of all ages to ensure that LEGO Universe reflects how kids and families want to play,” Helle Winding, senior director-marketing & product management at LEGO Systems, told Buzz. “It is not intended to replace the physical building experience, but to compliment it and provide new tools for collaboration.” Agency: Freddie Georges Production Group, La Palma, CA.