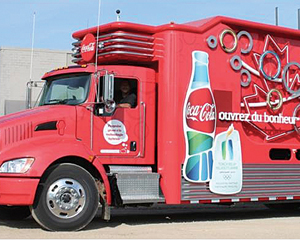 Green is the new red

Much like Vancouver’s ski slopes, Coca-Cola went ultra-green at this year’s Olympic Games. As the longest-standing Olympic sponsor on the roster, this year Coke committed to executing a completely carbon-neutral event presence, and according to inhouse estimates, the beverage giant succeeded. The initiative was part of the Vancouver Olympic Committee’s (VANOC’s) Vancouver 2010 Sustainability Star program. The program recognizes initiatives by Games partners, sponsors and VANOC that demonstrate positive and measurable social, economic and environmental benefits. Coca-Cola won a Sustainability Star for its carbon footprint and offset program, which the brand developed along with partners WWF-Canada and the David Suzuki Foundation.

“We find that [sustainability] is a good platform for us to reach an international spectator audience that’s here during the games that we can touch one-to-one,” says Petro Kacur, senior manager at Coca- Cola. The Happiness House Coke pavilion is the centerpiece for activations in Vancouver and is dominated by the brand’s environmental messages, including a mini museum tour of the brand’s Olympic bottles and uniforms and recycling-themed games (for more, see pg. 64). “The whole experience gives the message about our green efforts,” Kacur says.

The company’s green strategy for the Games limited carbon emissions and waste via three major initiatives, all of which were firsts at this Olympiad. The biggest news was Coke’s unveiling of the new “bottle of the future” called the PlantBottle, which is made of 30 percent plant material. The new bottles are also completely recyclable, of course.

“The creation of that plastic bottle is now incorporating what is essentially plant-based organic material made from sugar cane and molasses,” says Kacur. “What we’re moving toward is reducing the amount of petroleum that’s needed to produce plastic.”

The second part of the new ecoplan involved getting back all those bottles. With the goal of diverting a minimum of 95 percent of all waste from landfills, 100 percent of the beverage cups and lids distributed by Coke were compostable and made of natural recycled materials. Coke tried to ensure 100-percent collection of all drink containers throughout the Olympic Games venues by collecting bottles in more than 800 recycling barrels, each made from reused Coca- Cola concentrate barrels.

Finally, all of the Coca-Cola staffers on the ground at the Olympic Winter Games wore uniforms made of recycled plastic bottles. That’s right–everyone who worked for Coke at the Olympics wore a plastic outfit, from the brand ambassadors to the drivers of the hybrid delivery trucks. (Don’t worry, we’re told they feel like cloth and were quite comfy.) As part of its post-Games commitment to the host city, Coke made a two-year funding commitment to the Ray- Cam Cooperative Community Centre and will donate 7,000 hats, scarves and vests made from the actual containers collected at the Olympic Games venues to Community Centre residents.

“All of the uniforms, with the exceptions of undergarments and shoes, have incorporated [recycled material] into them,” Kacur says. “So if you take the full kit, gloves, scarves, hats, fleece and pants of a typical uniform, there’s upwards of about 120 bottles accounted for in that outfit.”

Also reducing the brand’s carbon output were 1,400 proprietary EKOfresh refrigeration units that nearly eliminated greenhouse gas emissions and reduced energy use by 35 percent over regular refrigeration units. Overall the units reduced carbon by 5,600 metric tons during the games, comparable to taking approximately 1,200 cars off the road for a year. This was the first time this new refrigerant was used in North America.

Coke accounted for the excess carbon in the 8,600 square-foot pavilion by purchasing Gold Standard carbon offsets from Offsetters, the official VANOC offset partner. The move brings the brand’s impact to zero tons of carbon dioxide. All in all, the company offset about 3,300 tons of carbon, mostly due to air travel, according to Kacur.

Though Coke has been moving toward a greener pavilion at each Olympic Games for several years, Kacur says the idea is to be constantly improving. “This time we’re more comprehensive than ever before,” he says. “We are using some of the same tactics and methods but we’re using them better and we’re better able to measure and prove our carbon neutral authenticity. We’ve gotten to the point that we’re able to deliver this [sponsorship] as a net carbon neutral activity, so that’s where we’ve improved.” Agency: ignition, Atlanta.