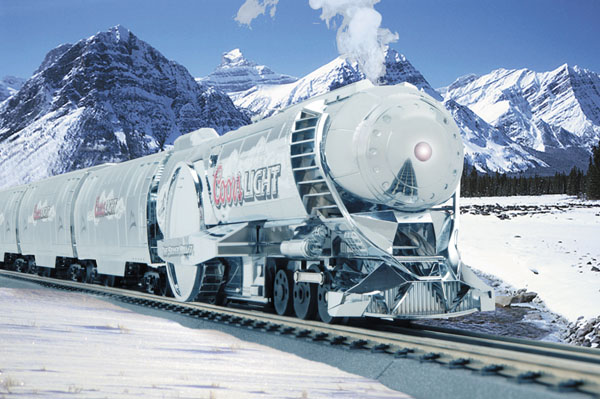 Coors Light this April wrapped up a 10-week TV and online campaign inspired by its iconic Silver Bullet Express by welcoming 100 consumers aboard a fully branded VIA Rail Canada train for three days of events at select stops throughout Canada. From April 15 to 17, the brand totally transformed five baggage cars to engage consumers during the period after the Super Bowl when, according to Coors Light, its competitors’ promotions go dark.

“We wanted to take advantage of the quiet period following the Super Bowl in order to own that timing from a brand communications standpoint,” Barry Alexander, brand manager at Coors Light, told Buzz. “It was also an opportunity to drive brand equity by bringing some of that nostalgia around our icons, such as the Silver Bullet Express and the Rockies, which is the birthplace of our brand.”

The consumers aboard the train were selected via a Facebook game and Coors Light shivering cans (cans that shake and deliver a message when handled) planted inside select six packs. Guests were treated to five different experiences: The Arcade, an old-school arcade with quarter slots juxtaposed with modern games like Guitar Hero; The Multimedia, an area equipped with 3G Internet access allowing Coors Light to broadcast live; The Score: a zone branded by the Score TV network with sports programming and card games; The Plugged-in: a space with music and live djs; and The Neon, an area that remained unoccupied during the day, but turned into a disco scene by night.

The first party stop was in Jasper, Alberta, for a barbeque and hot tub party at a ski resort. Next was a Toh-bog event in Kamloops, British Columbia. The final stop was in Blue River, British Columbia, for a Keys N Krates concert. The Coors Light train is scheduled to leave the station again in 2012. Agency: Draftfcb, Chicago.