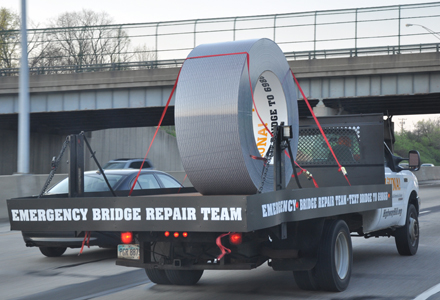 Members of the Laborers’ International Union of North America just wrapped a traveling tour through Kentucky, Ohio, Pennsylvania and Washington D.C. in a flatbed truck carrying an oversized roll of duct tape and the message “Emergency Bridge Repair Team” emblazoned on the side. The tour was created to raise awareness for the Highway Bill that’s being considered in congress to fix the nation’s decrepit roads and bridges.

“We have never done anything like this before around this issue,” Richard Greer, director-strategic communications at the Laborers’ International Union of North America, who’s handling the program, told Buzz. “The six-foot roll of tape symbolizes congresses approach to this highway bill. This is an opportunity to do something different to unify our members even more around this issue and raise visibility about our organization and this matter.”

The traveling team of two to three LIUNA members stopped the truck on key roads and bridges to get motorists’ attention, as well as congressional offices and high-traffic downtown areas and shopping centers during lunchtime. They spread the word about their cause and passed out a survival guide, entitled “How to survive a collapsed bridge,” which lists the nation’s bridges in poor condition by state and what to do to escape a sinking car (see it at highwaybill.org).

In addition to the truck and the survival guide, LIUNA also had radio ads running in all states set to the tune of “London Bridge is Falling Down” with children singing “America’s Bridges are Falling Down” and urging listeners to contact their congressman or congresswoman about the problem. Another ad claims that congress is forcing Americans to play Russian roulette each time they cross a bridge. The team also captured footage at each stop to create a video that will be released post-event on social media channels. Agency: Elevation, Washington, D.C.