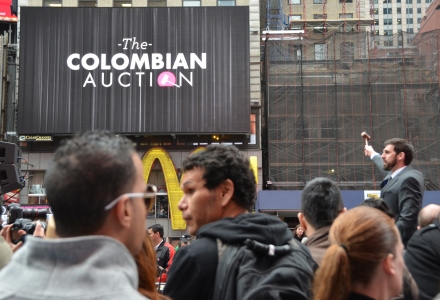 Colombia Rolls out the Welcome Mat

Colombia has an image problem. To combat that, the country’s tourism arm, the Colombia Country Brand, has launched a new campaign to show the world its positive side. It wants everyone to know that the country is reinventing itself, growing its economy and is full of possibilities for business, travel and investment.

To kick off the campaign on the global stage, the country turned New York City’s Times Square into a carnival of Colombian experiences from April 19 to 28. To begin the festivities, two-time Latin Grammy winner Fonseca was on the scene, along with Colombian coffee mascot Juan Valdez and the Queen of the 2013 Barranquilla Carnival, Daniela Cepeda. The celebrities introduced a contest that offered winners one of six once-in-a-lifetime adventures in Colombia.

The experience was centered on an interactive billboard. The billboard, in addition to showing sizzle videos of the six experiences, invited people to open a mobile app on their phones and tablets via a QR code. The app was tied to the social media profiles of the Colombia Country Brand. Consumers posted the video of the trip they wanted to win on their social media feeds and then encouraged friends to vote for him or her to win. The person who got the most votes during a 30-minute period each day won one of the all-expenses-paid trips. The experiences included humpback whale watching in the Colombian Pacific; a visit to Bogotá for the Ibero-American Theater Festival; a trip through the Coffee Route and its cultural landscape; a tour of Cartagena, Mompox and the Colombian Caribbean; a visit to Medellín, named the most innovative city of the world in 2013; and a chance to see the largest group of megalithic religious monuments in San Agustín and Tierradentro.

“We wanted to shout out to the world, ‘Look at us!’” Daniel Reyes, director-communications at Colombia Country, told Buzz. “We wanted to invite people to look again because they’ll discover things about Colombia they didn’t know.” Agency: Porter Novelli, Atlanta.