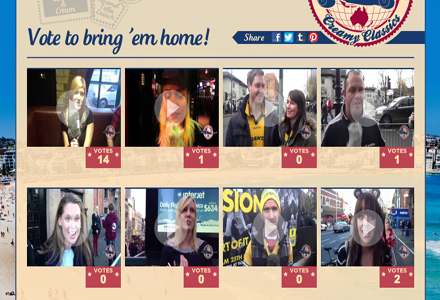 There’s nothing like the taste of home, and Bulla Creamy Classics, the ice cream line of the 102-year-old Australian brand Bulla Dairy Foods, is reminding Aussies of that this holiday season with its new campaign, Bring ‘Em Home. Central to the campaign is a contest where Aussie expats, backpackers and the like can enter to win a free trip home this summer (that’s February, for Aussies) by uploading a 30-second video message to Facebook describing what they are missing Down Under.

“Australia, like America, is a big ice cream-consuming country and ice cream is often consumed for dessert with the family,” Helen Reece, general manager of marketing and innovation at Bulla Dairy Foods, told Buzz. “What we wanted to do was leverage that connectedness that consumers have with family, home and ice cream and build brand affinity and loyalty. We thought an interesting way to do that would be to rejuvenate an already established brand, and instead of doing the more obvious things like a television commercial or a series of tastings with a new flavor, we thought we’d really build on that emotional connection through stories and video.”

The contest, which opened Nov. 19 at facebook.com/bringemhome, is being driven by social media and live engagements in London and New York City. Ambassadors armed with iPads and microphones are roaming the cities to track down Aussies and assist them in recording and uploading a message. In London, the brand activated a pop-up recording booth at London Victoria railway station on Nov. 23 and 24. Built to look like a giant Bulla ice cream tub, the booth featured a beach backdrop interior, sand-like printed flooring and Aussie “props” to create an atmosphere of home. In New York City, ambassadors hit venues where Aussies might be over the weekend of Nov. 24 and 25, and will be out and about over two more weekends—Dec. 1 and 2, and on Dec. 8. The activities are being logged live on Twitter (@Creamy_Classics), on the brand’s Facebook page (facebook.com/bullacreamyclassics) and on Instagram.

While the competition is strictly for Australians, the voting is open to the world now through Dec. 27. Contestants are also encouraged to share their video entry to drive votes from friends and family. The top videos will be reviewed by Bulla and whittled down to the four most compelling stories. Those four winners will be flown home and their journeys will be turned into a documentary celebrating their homecomings and reunions. Agencies: Grey, Melbourne (creative concept); Hotcow, London (campaign activation).