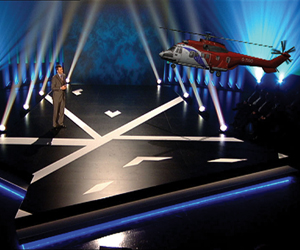 YES, IT’S A TOP BUZZWORD ALREADY. No, you don’t really understand it. To the uninitiated, the very term “Augmented Reality” may seem a little Star Trekky, but it’s not that far out there. Through AR, developers superimpose computer-generated images over a real-world environment in real time. The firstdown line superimposed over the field on football games shown on tv is a rudimentary example.

Statoil, an international energy company headquartered in Norway, last fall gathered its 30,000 employees in a global town hall meeting that reached 120 locations in 40 countries around the world. But even more impressive than the numbers of people it reached is how it reached them. The company utilized Augmented Reality to showcase its energy innovations in a high-tech broadcast that added a whole new dimension to the meeting (Agency: Jack Morton Worldwide, New York City).

Two years prior to the November meeting, Statoil merged with Hydro Oil & Energy to become StatoilHydro and a global player in the world’s energy scene. On Nov. 2, it changed its name to Statoil ASA. Along with the new moniker came a new corporate vision, “Crossing energy frontiers,” which was the theme of the meeting. That theme encompassed three ideas: the company’s global mindset, its technological innovation and its concerns for health, safety and the environment.

AR reinforced the theme and the notion of Statoil as a technological leader. “We thought, what better way to showcase that than to include innovative technology in the presentation of the new vision?” says Kjetil Undhjem, vp-brand management at Statoil. “AR added a whole new dimension to our broadcast.”

Through computer-generated imagery, Statoil replicated the exact features of its business environments, whether that was an oil rig, a new sub-sea platform or an off-shore helicopter, as its ceo Helge Lund stood alone onstage in a BBC studio in London. Roughly 200 people watched the live interaction between Lund and the images while the rest of the company watched via satellite, video conference or webcast.

“Technically it was two broadcasts going on at the same time into one feed,” Undhjem says. “As he talked about our newest breakthroughs in sub-sea technology, for example, the whole process happened. Then he moved over and talked about big issues such as climate change and our work on carbon capture and storage and suddenly our facility in Norway appeared next to him.”

When Lund talked about Statoil’s history and its first explorations on the North Sea, as he uttered the words “North Sea,” half of the stage seemed to open up, an oil rig appeared at his side and he walked around it. As all this happened in 3D, viewers watched it from all directions and camera angles.

“It appeared as if it were actually there,” Undhjem says. “And it completely replicated our facility. It was our oil rig, our submarine that appeared. It was really, really fun and got people’s attention. It got them thinking that we are technically advanced in this company. No one knew we could do this thing.”

AR also showcased Statoil’s role as a worldwide energy player via a global “flyaround” in which employees from locations around the world welcomed their colleagues into their offices and installations. From Singapore, the flyaround traveled to a gas processing plant in Karsto, then on to Calgary, Statoil headquarters in Stavanger, Rio, Moscow, Houston, Lagos, and Statfjord C, an oil platform located 150 kilometers off the coast of Norway. The virtual visit ended at the BBC studios in London with Lund’s 20-minute presentation, followed by a Q&A session.

“It was one of the most engaging ways of presenting the vision,” says Caroline Wurfbain, account director at Jack Morton. “They were fascinated by the speech and the content, but also by the way it was supported and brought to life. It’s something we are going to be using a lot now.” EM