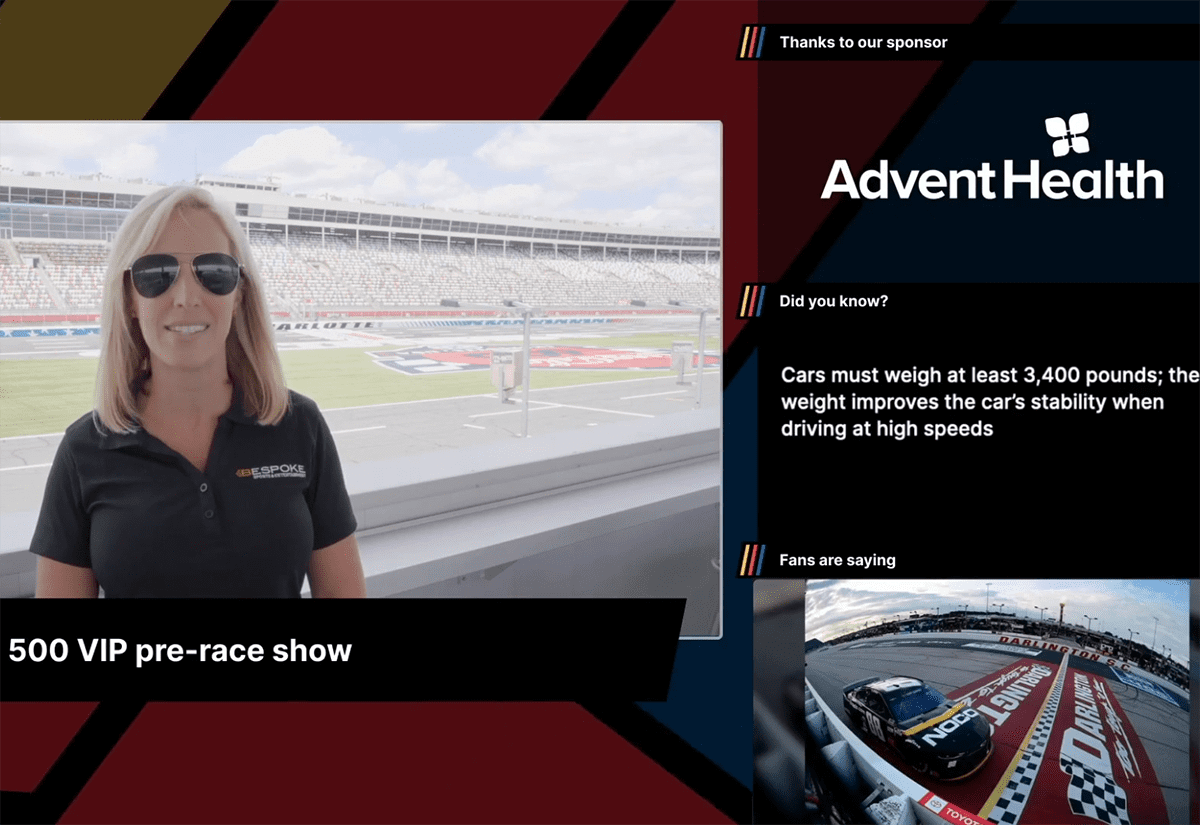 How AdventHealth Leveraged a Virtual Hospitality Event to Engage its Partners

Hospitality is an important piece of the sponsorship puzzle for NASCAR’s brand partners, affording them the opportunity to both thank and interact with key stakeholders and VIPs. Typically, the sponsor provides clients with unprecedented access to the track, the garage and the talent. But for the Coca-Cola 600 NASCAR Cup Series race on May 24, the pandemic out-ruled the possibility of in-person engagement. For sponsor AdventHealth, forgoing the chance to provide its clients with an exclusive experience wasn’t an option, and so the brand’s plans for a virtual event were set in motion. Leveraging a mix of pre-recorded and live content, AdventHealth ultimately delivered a personalized hospitality experience for 35 partners that blew the standard Zoom event out of the water.

“We invite people like strategic partners, influential community members, donors and board members [to NASCAR events], and we use hospitality to foster relationships,” says Anna Donaldson, director-sports marketing and strategic partnerships at AdventHealth. “When that piece went away and we were no longer able to interact at track, we were forced to think about new ways that we could leverage our partnership assets and still be able to continue to grow those important relationships.”

Using a platform-agnostic virtual event platform that could pull in feeds from anywhere on the internet, AdventHealth delivered a “recorded for live”-style event with some live elements woven in that served as a 45-minute pre-race event, with programming continuing through Stage 1 of the competition. (The site was then kept live for the remainder of the race, giving attendees further opportunities to interact with one another through the platform’s chat feature. )

Kicking off the hospitality strategy was a video from AdventHealth driver Ross Chastain inviting the brand’s VIPs to the virtual event. Then, on the Friday before the race, attendees received branded home viewing kits featuring tune-in information, a hat, a NASCAR hero card signed by Chastain, snacks and other trinkets, like a mini diecast car.

The virtual event programming ran the gamut, but every element of the experience was designed to provide attendees with exclusive content that no one else could access. Like a virtual tour of the team hauler, the truck that carries the race’s vehicles and tools to the track, during which the driver detailed all of the car parts and instruments involved in race day. Attendees additionally got a personal tour from the pit crew coach, who ran the team through a practice pitstop then explained what each crew member’s role is. There was also an up-close and personal look at AdventHealth’s car before it hit the track, along with information on the vehicle’s unique modifications. And then there was the brand’s social media call to action asking attendees to share their race viewing set-up. Some of their posts were shared on the event platform’s social feed, which also pulled in content from team and driver accounts.

The digital engagement continued on through the first stage of the race. During commercial breaks, attendees played trivia for exclusive prizes. AdventHealth also developed a driver pool, matching each attendee with a driver other than Chastain for the chance to win an official, signed NASCAR diecast if their driver won the first or second stages of the race, or the overall race itself. The brand credits the driver pool with keeping attendees engaged for the duration of the competition. In addition, AdventHealth recruited a few NASCAR media members, most of whom were not allowed on-site at the track due to the pandemic, to offer live mid-race analysis from their homes. Attendees also had access to the scanner that hosts communications between the drivers and crew chiefs. Although the scanner was made available to all consumers in the wake of COVID-19, AdventHealth’s clients were specifically encouraged to tune into Chastain’s channel for a live, unfiltered glimpse into the driver’s strategy. And finally, the element of the event that garnered the most engagement: A Q&A with Chastain himself. Attendees could submit written or video questions, and Chastain answered each and every one of them. He also sent custom post-event videos to each guest, personally thanking them for attending.

So, what’s next for AdventHealth and sponsorship? With an ever-changing set of health guidelines to abide by for in-person events, Donaldson says this is only the beginning of the brand’s virtual hospitality strategy. Off to the races. Agency: Bespoke Sports & Entertainment (virtual event platform, production, creative).