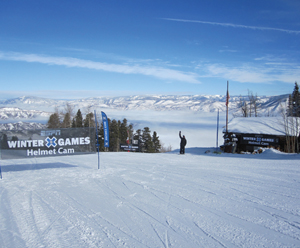 When it comes to generating social media activity through events, the sweet spot lies in convincing attendees that your brand’s content and assets are witty, informative or just plain weird enough to merit a comment, tweet or wall post. That’s why smart marketers are integrating social media kiosks and “post it” incentives right into their activations and events as a matter of course. Yahoo! did it with its partner Flickr at the Olympics in January. ESPN made it extra-fun with the Snowcam promo for the Winter X Games. And Reliant Energy bucked the competition with its integration at Rodeo Houston in March.

Yahoo!
The International Olympic Committee (IOC) had a stranglehold on photo sharing in Vancouver, but with Yahoo! partner Flickr running the IOC’s official photo channel, there was an opportunity not to be missed—and miss it they didn’t. Consumers popped into the Yahoo! Fancouver experience at more than 10,000 per day to participate in the photo activation that allowed them to post photos to the huge “You” wall collage, on the Yahoo! Flickr site and their own Flickr, Twitter and Facebook pages. The photo activation stations used a wireless Eye-Fi card so consumers could upload the images with a quick log in to their account.

In several areas stocked with long rows of internet-enabled Macs, attendees were invited to pass the content and images around to all their peeps that didn’t make it to the Great White North for the games. Also, the social media chatter got a huge bump from the Fancouver brand ambassadors themselves, who were selected based on a series of criteria, including how many Facebook and Twitter followers they had. And each staffer was given “social media breaks” throughout the course of the day so they could update their social media accounts with all the happenings.

ESPN
To build buzz for its coverage of the 2010 Winter X Games, ESPN launched the Snowcam experience on the slopes of Aspen, CO, in the week before the event, which ran Jan. 28 to 31. The sports channel set up an “extreme” ski and snowboard track where brand ambassadors signed up skiers of all ages to strap on a pair of hi-def, helmet-mounted webcams called a Snowcam.

The brave skiers hit the slopes, tried to catch air off a little ramp mid-course and coasted into the finish with a cheer (or a sigh of relief, if survival was the objective). The videos then were posted to an X Games YouTube channel and propagated all over the web via viral posts and reposts, all of which contributed to the brand’s larger goal of driving increased viewership. Before the folks hit the course, each one picked up a new nickname (i.e. Ken “the Mad Irishman” Briodagh). Post-run, that nickname was used in the creation of the final video. Each skier or boarder’s footage was used for a mock action movie trailer, starring themselves, under the new moniker. ESPN encouraged the consumers to repost the videos everywhere, right from the foot of the mountain on computers it provided. All in all there were about 420 videos posted with each one generating about 30 views online.

“We were trying to reach fans on a grassroots level because the X Games has always been on a more community-oriented level,” Lorelei “Gnar” Wall, marketing director at ESPN, says. “ESPN is trying to find new ways to connect at a grassroots level” (rEvolution, Chicago, handled).

Reliant Energy
In the unregulated, dare we say, wild west-like Texas energy market, as many as 30 competitors vie for each consumer’s energy business, so it is imperative for brands to differentiate themselves in memorable ways. To that end, Reliant Energy activated its sponsorship of Rodeo Houston last month with a 50-square-foot footprint and all the social media buzz it could muster. To earn that buzz, the brand offered stick horse riding for the kids, energy-smart video games for the youths and adults and a lasso a CFL (compact florescent light bulb) challenge for the not-so-grown-ups.

The goal however wasn’t just to get the attendees to have fun, but to help them tell the brand’s story online, so at the end of the dusty trail, a video activation station à la the “Elf Yourself” phenomenon put consumers into the rodeo action riding a bucking bronco or wild bull. When the video was ready a moment later, brand ambassadors helped the consumers to post the video on Facebook.

“Our aim is to become more than the anonymous provider of electricity and this program is a great way to get our brand out into the street,” says Manny Rodriguez, vp-brand and marketing communications at Reliant. (The AIM Agency, San Diego, CA, handled).  EM