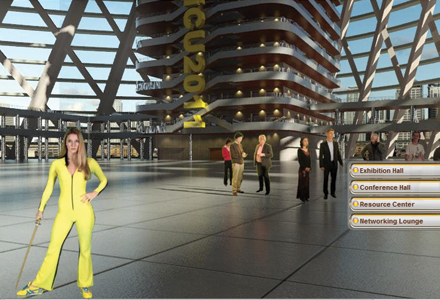 When software provider Compuware made the choice to take its global user conference virtual in 2010 due to budget and travel cuts, attendance for the show doubled, bringing in new attendees from India, Mauritius, Mexico and Sri Lanka. This May, the company did it all over again on a platform that reached more than 30 countries spanning three different time zones. Now that’s global.

Though the virtual solution (provided by InterCall, which recently acquired Unisfair) has proven to be successful, there are a number of challenges you need to consider in order to run a smooth international event program. Compuware’s Uniface marketing campaign manager Zulayka Esmeralda Martis, and InterCall’s vp-marketing Joerg Rathenberg take us behind the scenes—and ’round the world—on what to keep in mind when organizing a global virtual event.

Throw an Internal Event
Compuware kicked off its program in Australia’s time zone with a four-hour virtual event. It then moved to Europe’s time zone for four hours and then the Americas for another four hours. Martis says she was up for nearly 24 hours. The around-the-clock schedule probably remains the biggest challenge for marketers running this kind of event, but there are some things a company can do to make it easier on its people. Compuware throws an internal live event at its headquarters in Amsterdam where it serves breakfast, lunch, dinner and provides massages for the team. “The first time we did this it was hard to convince people, but now that we’re doing it for the third time they say, ‘No way I’m staying home,’ because it’s such a great environment,” says Martis.

Bring the Players Together
In addition to the folks running the show, the event’s moderator also traveled to company headquarters from the United Kingdom as well as its director from Detroit who wanted to experience the energetic vibe for himself. They gathered in a cinema-style room to tune in to the event, which helped avoid bandwidth overload. The folks tuning in from home did their own thing, but next year Martis wants to expand the physical internal event to make the overall show more of a hybrid model.

Schedule a Support Team
Pulling off a “follow the sun” event means having a great deal of support from your team. Martis makes sure she has groups ready for action assigned to each time zone, including sales representatives and technical support. She collaborates with the different departments within the company and asks who is available and creates a schedule of duties per time zone, except for the speakers who present in all three time zones.

Pre-Record and Replay
There’s a misconception that a virtual event means that every aspect of it is going to be simulcast live, but that’s not always feasible. In some cases, you might have to pre-record or replay a session, says Rathenberg. He suggests a “simulive” approach, which means taking everything you capture live and editing it down. “When people think of hybrid events people think it is simple—just put up the camera and make it available to the audience. But that’s not a very successful way to do it because in general people watching on a screen are less tolerant to boring material,” he says. “What you have to do is shorten things and make them more like sound bites.” You don’t necessarily offer a live feed across the world with this approach but if you edit the content, you can make it more concise and impactful, and therefore, more viewable and viral.

Give Them Face-Time
One event element that should always be live is the question and answer sessions. Speakers should be willing to present via video chat, Telepresence or Skype and should plan to be available after the session is over for live interaction with attendees. Make sure your speaker has the right technical support, equipment and hardline connection (versus WiFi, which is less reliable) if they are calling in from home or abroad. “Having a live person doing Q&A is important because last year during the presentation, people would drop off. But since they knew there was a live cam for Q&A this year, they stayed for the duration of the presentation and afterwards,” says Martis. “People still want to see a face.”

Keep it Live at All Hours
Never feed viewers pre-recorded content and then at the end of the presentation cut it off at the Q&A. You can broadcast a pre-recorded session, but ask your speaker to tune in at midnight his or her time to do the Q&A. “In today’s global world people spend a lot of time at very weird hours working from home, so it’s not unusual. It’s part of doing business in a global economy,” says Rathenberg. Having a show running on three different time zones has its unintended benefits, too. Attendees can tune in whenever it fits their schedule—even if that’s at 3 a.m. at home in their jammies.

Respect the Cultural Nuances
Cultural differences don’t just apply to languages, they also apply to lifestyles. Compuware learned that although it offered its virtual event to the Asia-Pacific region in its respective time zone, in Australia, the workforce starts its day much earlier and ends by 3 p.m. Another thing Martis learned is that some countries don’t allow their employees to view video streaming for four hours, or to even view them during working hours. The solution for next year will likely be a hybrid approach where the company rents a nearby hotel room, offers lunch and invites its customers there so they can view it together. (For more on throwing a killer satellite event, click here.)

Speak The Language
Compuware’s InterCall platform offered different virtual environments translated for specific languages, but it chose to keep the presentations in English to save costs and because the majority of its target customers do business in English. Next year they’ll add subtitles for those countries they know would rather experience the event in their language. For the webcast sessions, Rathenberg says you can either have them in a voiced over translation, which is more costly, or use subtitles. You can also consider doing a different webcast by a speaker who is local to that market.

Seek Local Insights
Rathenberg warns marketers against making assumptions about cultural differences that are reflected in the online platform—they may backfire. He recounts how during an event not related to Compuware they added moving people in the virtual environment that they considered to look Asian. But when they sent the template to Japan, they rejected it saying that the characters were not what Japanese people look like. It’s important to be sensitive and seek the advice of someone in that particular country about such matters. The same applies to backgrounds, pictures, promotions and calls to action.

Make it Personal
A personalized touch goes a long way with attendees from any country. Compuware customized the virtual environment with photos of its actual team instead of generic avatars. “It makes it more personal,” says Martis. “We did the same thing for the resource center, the product lab and exhibition hall booths.” Compuware also posted personal welcome videos from the sales director and software architect.

Keep up the Post-Event Communication
One of the main reasons why today’s virtual and hybrid events have become so desirable is because it allows companies to take advantage of the environment they created and use it year-round. “After the event we send out emails thanking people for attending and reminding them of the on-demand version,” says Martis. “With a physical event, once it’s over you’re done, but with virtual you can reuse it. I can even update it with new content.” It’s also a great tool for Compuware’s sales team, because they can go in with their customers and view videos and use it as a reference.

Keep them Wanting More
Rathenberg suggests storing online event content and releasing it over time, for example, one session per week. You engage your audience with greater frequency without any additional costs. “Our customers keep their environments up forever,” he says. “The key is to keep content fresh; you can’t just leave it up there and do nothing with it. You need to have a content release strategy.”

Compuware’s massive increase in show attendance proves that its global virtual strategy is paying off. “We like this way of communicating because we reach so many more people than when we were solely doing a physical event,” says Martis.

And that’s insight the whole world can appreciate.  EM