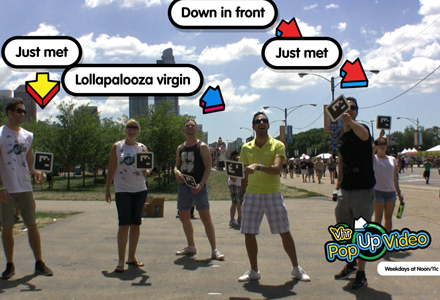 VH1, the music video channel, re-launched its hit series “Pop Up Video” on August 6, and to promote the rebirth of such an iconic bit of programming and build some buzz, the network deployed an augmented reality experience at Lollapalooza in Chicago Aug. 3 to 5 and at the Summer MixTape Fest in Hershey, PA on Aug. 17 and 18. The idea was to make the attendees and music fans the stars of their own Pop Up Videos.

The two-phase activation first put the attendees into a video environment, then, using augmented reality, inserted the show’s famous pop up factoids into the scene. The AR program is one of the first to bring multiple consumers into the scene simultaneously in such a large scale. The large, branded screen, with an integrated camera and software for the AR, captured the action in real time and broadcast it live across the footprint. The brand gave participants branded paddle fans that allowed the AR to identify their positions and movement, in addition to making it possible for the people to interact with the virtual elements on the screen.

“People love this show, and we wanted to create a fun interactive experience that would bring the show to life for them,” Stephanie Werner, vp-consumer marketing partnerships and promotions at VH1, told Buzz. “Our goal was to have a fun space that would build awareness about the show. I think we did that.” Agency: AWESTRUCK Marketing Group, New York City.