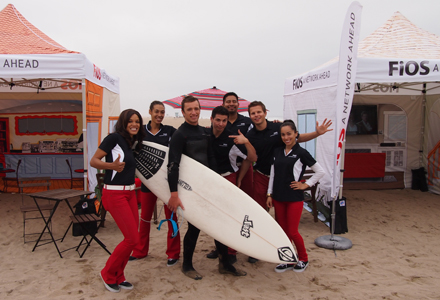 To increase awareness for its FiOS internet, phone and TV service, Verizon created the four-week (April 20-22) Speed of Life events that traveled to three beaches in Southern California with street team activations and mobile mapped projections.

At Huntington Beach, Long Beach and Hermosa Beach, the street teams engaged consumers in tent environments that illustrated FiOS’s services in a home, lounge and coffee shop settings. The footprint was peppered with QR codes that allowed consumers to take a self-guided tour of each service, and when consumers reached certain hotspots they won instant prizes and were entered into a grand prize drawing. Brand ambassadors were on-hand to answer any questions.

Each three-minute projection was shown on a mobile set that was built to move from location to location with the tents. The projections were choreographed to music and showcased Verizon FiOS technology. During the projections, two consumers were selected to sit in a photo area where they had their picture taken to be included in the projection experience in real time. Afterwards, they received a coded card to pick up their video.

“The projection mapping was a fun interactive way to increase FiOS awareness and educate consumers on the evolution of the FiOS product,” Kim Cochran, director-marketing at Verizon FiOS California, told Buzz. “For three short minutes we were able to captivate consumers in FiOS markets and show them the benefits of our home and away applications as well as refresh them on the superior FiOS internet and TV service.”

The experience also included appearances by the Laker Girls. The event was covered in a series of publications, including the The Wall Street Journal, The Sun Herald and Virtual Strategy magazine. Agency: BI WORLDWIDE Minneapolis; Technology: Cue Labs Minneapolis; Hip Cricket, Seattle