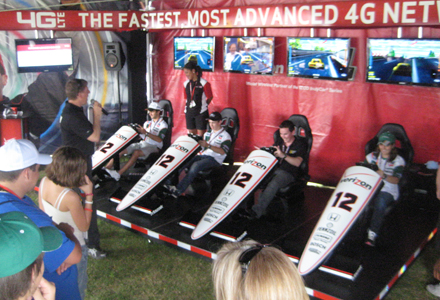 As part of its stepped-up partnership with the IZOD IndyCar Series, Verizon has signed on as a founding sponsor of the IZOD IndyCar Fan Village, a newly reformatted fan experience at the races. Verizon also sponsors a car in the series, Penske Racing’s No. 12 car driven by Will Power.

Verizon presented the idea for the village to IndyCar, which in turn worked with Verizon’s agency Marketing Werks to design the village. Additional sponsors include title sponsor IZOD, National Guard, Honda and Mattel Hot Wheels.

Verizon’s pavilion features a racing simulator in which fans play the “Asphalt 6” racing game using a Motorola Xoom tablet as a steering wheel. Verizon also is demoing its 4G LTE network and other products and handsets.

“These are products and services consumers hear about, but when they least expect it, we are connecting with them through their passion for racing,” Suzy Deering, executive director of media and sponsorships at Verizon, told Buzz. “Our 4G LTE speed message matches nicely with IndyCar. It’s a nice parallel.” Agency: Marketing Werks, Chicago.