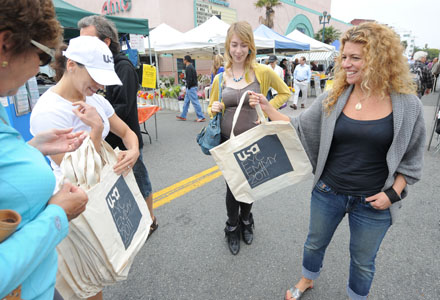 USA Network over two weekends in June headed to farmers’ markets, hiking trails and dog parks in Los Angeles as part of a street-level “For Your Consideration” campaign targeting voting members of the Academy of Television Arts & Sciences and other influencers. The goal of the campaign was to keep the cable network top-of-mind during Emmy Nomination season, which is going on now.

On the weekends of June 11 to 12 and June 18 to 19, street teams and USA brand ambassadors visited seven farmers’ markets distributing eco bags with the network’s For Your Consideration message, branded water bottles featuring the shows it is promoting to Academy voters and postcards showcasing all of its shows. They distributed water bottles to hikers at hiking trails and dog parks, while their canine friends sampled branded doggie treats and fresh water from USA-branded dog bowls.

The campaign also includes a 30-second FYC spot running in 92 movie theaters throughout LA shot by photographer Robert Maxwell for an iconic, consistent look that carries over to the imagery used in the street campaign.

“This is an audience that is hard to reach, especially in the LA market where they are so jaded,” Alexandra Shapiro, svp brand marketing and digital at USA Network, told Buzz. “We wanted to find tactics beyond the traditional vehicles that would break through the clutter and, even more importantly, be perceived as value-added to potential voters.” Agency: The Michael Alan Group, New York City.