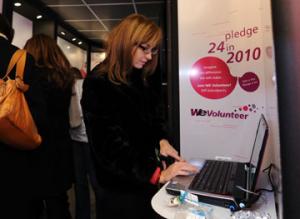 WE Builds Support for Volunteer Campaign

To kick off its latest volunteerism initiative called Pledge 24 in 2010, WE tv took pledging to the people on Dec. 17 with a mobile Resolution Center where passersby could step out of the frigid temperatures and pledge to warm the lives of others with volunteer service in the new year.

The initiative is part of the network’s WE Volunteer campaign, a three-year (2009-2011) program dedicated to empowering women and the people in their lives to volunteer with their favorite organizations. The first person to make a pledge at the mobile center was actress, mother and activist Cynthia Nixon from HBO’s “Sex and the City,” who is doing PSAs on the network through February. Nixon volunteers for Alliance for Quality Education, a New York state non-profit centered on providing high-quality public education to every child.

“The resolution center was a way for people to touch and feel and make the initiative more of a reality for them,” Kenetta Bailey, svp-marketing at WE tv and Wedding Central, told Buzz. “It gave them a tactical vehicle to go to and say ‘I’m going to do it.’”

The 43-foot branded resolution center made stops in Times Square and Union Square where it lured in folks with a fireplace and relaxing music. People could pledge their 24 hours of volunteer service by signing up at kiosks provided by Dell. Those that pledged received stocking stuffers (star-shaped soaps by Lush) and were automatically entered into WE tv’s Chic in the City sweepstakes for a chance to win a two-night stay at a New York City boutique hotel, attend a red carpet premiere and after party, dinner and a $200 shopping spree at Saks Fifth Avenue. Through Jan. 31 people can volunteer in their communities by visiting wevolunteer.tv and also be entered in the sweepstakes.

In addition, WE tv is reaching out to 150 non-profit organizations urging their members to pledge; the non-profit with the most pledges will have their 30-second PSA air on WE tv and Wedding Central during National Volunteer Month in April. Agency: Civic Entertainment Group, New York City.