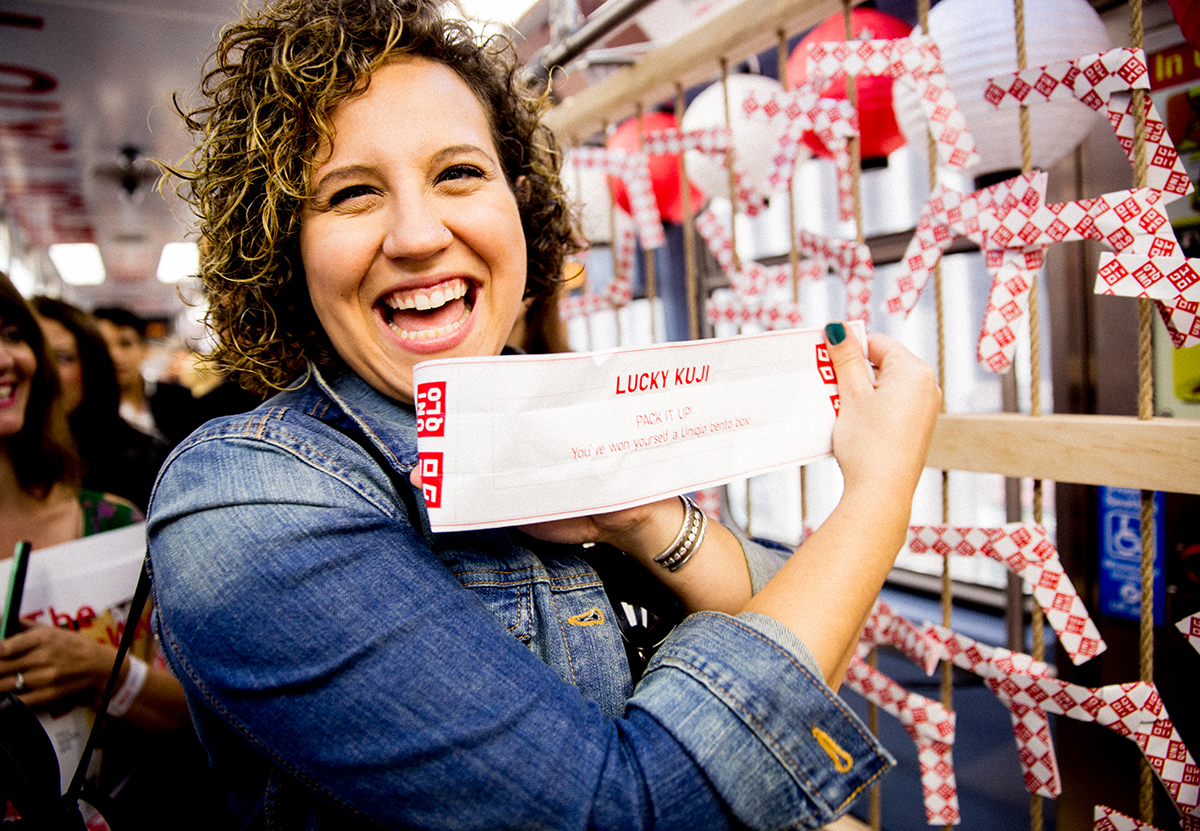 Japanese clothing retailer Uniqlo took commuter events to a new level with a total train takeover to promote the opening of its first Midwest store in Chicago. The brand wrapped a Chicago Transit train in graphics and hosted consumers on 15-minute party loops (on the El, Downtown Loop) while delivering messaging and serving up prizes. The program, driven by an EventBrite invite, kicked off Sept. 28 and wrapped on Oct. 23, the store-opening day, with several loops taking place each week.

Arriving guests checked-in below the platform and walked up, where waiting on the tracks was the white and red branded train wrapped with logos, calls to action, the hashtag #uniqlochicago, as well as the Michigan Avenue address of the new store. Inside, red and white paper lanterns hung from the windows, a dj kept the party going and as the train started to move, performers disguised as other riders suddenly hopped up, grooved and performed choreographed stunts. (The strategy dovetailed with Uniqlo’s ad campaign that enlisted local pioneers in music, sports, entertainment and hospitality to appear in ads.)  On each seat inside the train was a bandana satchel with Japanese-themed prizes and gifts. There were Shoji screens and a traditional Japanese fortune game where participants could select a ribbon for the chance to win a host of prizes from a free trip to Japan to tickets to a Chicago Bulls game.

The very first train ride was for press, social media influencers and VIP guests to generate buzz for the program. Overall, the brand recorded more than 3,000 RSVPs.

“Ultimately we wanted the people of Chicago to know and love us, with the true understanding that our clothing is meant to add value and simplicity to their lives,” says Natalie Harewood, marketing manager at Uniqlo. “Since commuting is a huge part of their daily lives, what better way to speak to a community than to meet them where they are and integrate ourselves in a way that is relatable, but also uniquely entertaining while leaving a last impression.”

And how was Uniqlo able to pull off this stunt? The Chicago Transit Authority recently began allowing private groups to charter trains for events like birthday parties. While brand-marketing events were new territory, after jumping through legal and city hoops, and procuring an additional insurance policy (this is likely the only agency in the country that has transit railway insurance on its capabilities deck), Uniqlo was able to go full steam ahead. Agency: Invisible North, New York City.