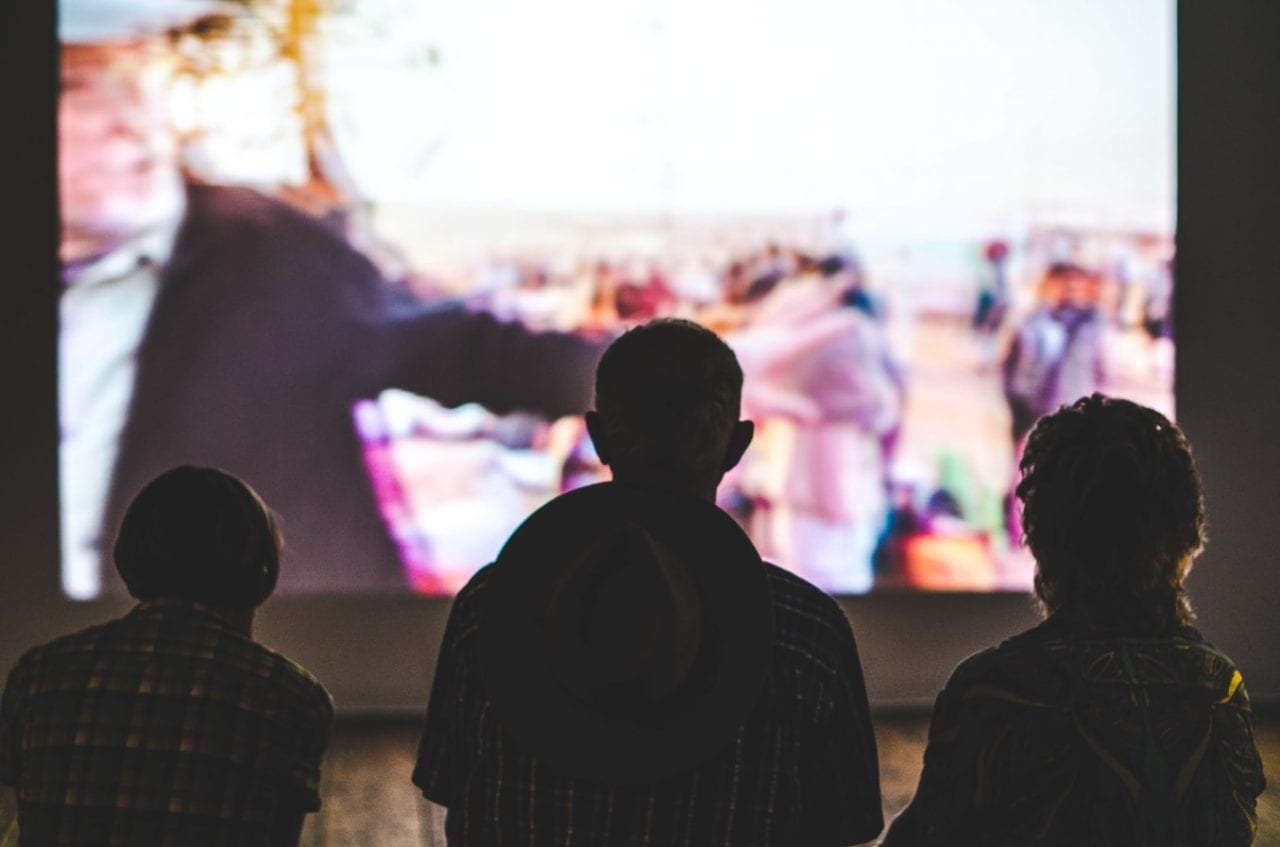 It says something about the power of event marketing that big-time TV networks are no longer relying only on their own form of media to get the word out about their programming. More and more big and small networks basic cable stations and premium pay stations alike are all turning to experiential to promote shows. To create buzz for mid-season replacements reality shows election coverage—you name it—networks are taking it to the streets to hook in viewers and entice media buyers.

“We do TV ads print radio digital but the live component really takes it to the street in a very interactive way ” says Theresa Beyer vp-activation and promotion at AMC. To promote its hit show “Mad Men” this summer AMC used guerrilla tactics. “It’s a great way to extend your marketing in a very personable interactive way ” she says. “It’s also a way to hear what your viewers are saying. It’s like putting your ear to the ground.”
So just how creative is TV land getting with event marketing? Check out some of the stunts it pulled off this summer:

The chair designs ranged from a diner theme to punk rock. Visitors to the salon had a chance to vote for their favorite chair via text messaging at an interactive gallery on the exterior of the pop-up. Bravo will be profiling each chair and its artist on bravotv.com. The winning design and artist will be featured additionally in a separate story (Agency: Grand Central Marketing New York City). “Doing a live event like this works to showcase our talent like nothing else can and it allows consumers to interact directly with them ” says Valerie Brown director of digital marketing and events at Bravo. The first 100 guests in line for a blow out also received a gift bag brimming with NEXXUS hair products.

Families could ride one of two eco-bikes one powered by a permanent magnet motor and the other a car alternator that were on hand for demos.
Folks could take a photo via green screen by posing with digital images of Planet Green talent like Adrian Grenier and Maria Menounos. And they could check out the Planet Green geodesic dome powered by a solar fan. At the dome visitors could meet Steve Thomas—host of Planet Green’s series “Renovation Nation”—as well as test their green skills in a trivia game meant to reinforce the value of a green lifestyle. Large screens showed clips of Planet Green programming on a loop (Agency: Javelin St. Louis MI).

MAD MEN
To promote the second season of its critically acclaimed show about advertising execs in the 1960s AMC went guerrilla. It sent out 16 brand ambassadors dressed in period costumes to Grand Central Terminal in New York City. The iconic train station tied in perfectly with the show’s historical context. It offered lots of foot traffic and tied in with the main character Don Draper who commutes through Grand Central daily.
“The accessories the clothes the hairstyles the hats the hankies in the men’s pockets were very authentic to the period—that was important in making this believable as if the characters had stepped out of ‘Mad Men’ and into Grand Central ” says Theresa Beyer AMC’s vp-activation and promotion.

The brand ambassadors strolled Grand Central periodically stopping to strike poses that stopped commuters in their tracks—for instance a woman bending over to fix her hosiery while a man looked provocatively at her.
To remain authentic the crew puffed on candy cigarettes and handed out business cards for Sterling Cooper the ad agency on the show. On the card viewers were given show info and a chance to win $10 000 by answering trivia questions online. The business cards had a 32 percent return. AMC also wrapped the inside of the busy Grand Central shuttle to look like the inside of the train station with a life size image of Don Draper. (Handled in-house.)

CNN ELECTION EXPRESS YOURSELF TOUR
CNN’s Election Express Yourself Tour which launched in the fall of 2006 and wraps up in New York on Election Day gets our vote for bringing the excitement of this year’s national election to 100 000 consumers in 39 markets and 60 events. It has hit state fairs and festivals high schools and hotels and of course the Democratic and Republican conventions reinforcing the message that CNN Equals Politics and connecting with consumers advertisers and cable affiliates along the way. The 40-foot-by-60-foot footprint which rolled out again earlier this year and took to the streets again this fall is anchored by the network’s customized Airstream trailer. A 16-foot-long LED message board scrolls across the top of the vehicle and five flat-screen TVs cycle between live CNN programming and pre-recorded promotional content. Other highlights: two touch-screen polling stations where visitors can answer politically oriented questions a six-foot-by six-foot political graffiti wall where they can write messages and playing off the political memorabilia fad a station where they can make their own political buttons. Visitors can record up to 60 seconds of video and perhaps enjoy a moment in the spotlight by responding to questions at two self-operated iReport video kiosks. Footage is automatically uploaded to iReport.com CNN’s user-generated community. Once the material is vetted and approved for use it could appear on a CNN network or on cnn.com (Agency: Pro Motion St. Louis).
“Experiential marketing has been of increasing interest to our network and we wanted a way to engage viewers outside of TV ” says Keisha Taylor marketing manager at CNN. “We wanted to be able to interact with them on a personal basis which was the catalyst for this tour. We couldn’t have picked a better time because people are really so passionate right now about politics. Most people wouldn’t expect to see CNN at their state fair or at their college or university. It added another layer to how we reach our audience.”

IN TREATMENT
Targeting promotions to groups that associate themselves with the topic of a show is a great way to get more bang for your buck. For HBO’s “In Treatment ” which profiles a psychiatrist and his patients reaching out to professionals in that field made sense. So rather than focus its promotion on the general public HBO partnered with psychology sociology and social work graduate programs at five state schools. To build buzz prior to the premiere of the show HBO hosted multiple screenings at the schools.

The goal was to build a strong base of fans before the show aired and spur viral marketing. To make this happen HBO contacted department heads at the schools and reached out to professors encouraging them to tell their students about the screenings. Along with the screenings HBO hosted a cocktail party for faculty and students (Agency: LeadDog Marketing Group New York City).

THE SEARCH FOR ELLE WOODS
Leading up to MTV’s “Legally Blonde The Musical: The Search For Elle Woods ” 50 pink-clad blonde ladies invaded New York City landmarks singing hits from the Broadway musical and doing Elle’s signature move—the bend and snap—during a two-day stunt meant to create buzz for the show.

“One of the main reasons for the stunt was to get the core Elle Woods audience but also to reach passersby and get the attention of the press ” says Damon Burrell vp-marketing at MTV.
The 50 ladies traveled atop a wrapped double-decker bus to Times Square the Brooklyn Promenade the NY Supreme Court Building Madison Square Garden Tiffany & Co. and Central Park. They were a hit posing for photos teaching folks the bend and snap and handing out branded nail files with the show’s info on it. They appeared on MTV’s “TRL” in Times Square changed to “TR Elle” to coincide with the premiere of the show.

In Los Angeles 15 of the pink ladies strutted down the red carpet during the MTV Movie Awards. “There’s always something going on in places like New York City and L.A. especially in Times Square so to be able to pull together a significant amount of girls dressed in pink and doing the bend and snap was definitely a good way to break through the clutter ” Burrell says (Agency: Jack Morton Worldwide New York City).

ICE ROAD TRUCKERS
To drive tune-in to the premiere of “Ice Road Truckers ” cable net History teamed up with NASCAR in a partnership that brought an Ice Road Trucker-themed experience to four track events this season. History also created a series of mini-documentaries to be aired during episodes of the series.

“History fans have a real passion for the technology behind ‘Ice Road Truckers’ and an interest in the drivers and the aspect of pushing the limits of mental toughness and endurance against very difficult conditions ” says Chris Moseley senior vp-marketing at History. “There was a lot of crossover in terms of Ice Road Trucker fans indexing high among NASCAR fans. It was a natural affinity and a natural partnership.”
At each race Ice Road Trucker Hugh Rowland appeared and hosted the Ice Road Trucker RC Dash a family-friendly competition in which fans raced fully equipped 1/14-scale custom-designed radio-controlled IRT haulers around a 2 000-square-foot oval synthetic “Ice Road” slick track complete with mountains evergreen trees and fake snow. Rowland signed autographs and participated in various events surrounding the races such as the Freightliner Hauler Challenge at Lowe’s Motor Speedway.

BRIDEZILLAS
Consumers aren’t the only ones networks are trying to reach. Media buyers are a big part of the equation as well. To promote “Bridezillas” to consumers and media buyers in the Chicago market in 2007 WE tv sent improv actors playing a bride groom photographer and wedding party out into the streets. This summer it recreated the same scene but stopped in front of targeted media buying agencies.

Before hitting the streets WE tv sent out wedding invitations and a gift box filled with bridal shower items to the buyers and sent them branded champagne flutes then followed up with email blasts. “Event marketing reinforces what you’re trying to accomplish for your brand ” says WE tv vp-brand experiences and events Heather Umen. “It reinforces the message that they’re seeing on television and in the media. They’re getting the visual in-person which brings the entire experience to life.”

Once on site the media buyers were treated to interactive games conducted by the improv actors. The games included a bouquet toss and a wedding registry grab game. Folks who attended received a gift card to popular wedding registry stores like Crate and Barrel and Williams-Sonoma.

WE tv extended the party to consumers by staging mini-wedding ceremonies in local trolleys throughout the day. Adding to the party atmosphere was a wedding band live dancing and a bouquet toss with prizes for consumers. To top it off actors dressed in wedding dresses rode public transportation throughout the day behaving like the relentless bridezillas on the show while brand ambassadors handed out tune-in cards (Agency: LeadDog Marketing Group New York City).  EM