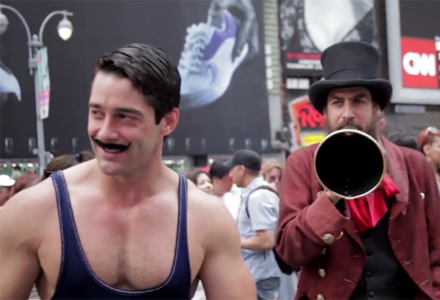 This summer, Clear Channel Spectacolor, a division of Clear Channel Outdoor, is activating in New York City the “Times Square Dunk Tank,” an interactive billboard, Facebook app and live interaction program designed to appeal to consumers and impress advertisers. The campaign launched on Memorial Day weekend with a carnival barker extolling the virtues of the contestants and inviting locals and tourists to step up and help dunk either the Painted Lady, played by pin-up model and Oxygen TV’s Best Ink star Sabina Kelley, or the Strong Man, played by Hollywood stuntman Robert Miller. Consumers vote via Twitter to decide which of the two gets dunked into the tank. The brand also broadcasts the tweets to the oversized HD screen.

Dunkings take place three times an hour and, so far, the brand is seeing about 500 participants per dunking. That’s 1,500 consumers an hour hanging out in Times Square, waiting for the big augmented reality moment. See, once voting is closed, the brand “releases” an AR beach ball to the crowd, which bumps that ball around until it hits the target of the lucky dunk-ee. Alongside the live events, a contest on Facebook awards one consumer a chance to be dunked in real life, too. To enter, fans submit a video audition online. The winner will travel to Los Angeles for filming and New York City to see himself (or herself!) get dunked on the big screen.

The real secret here is: this is not a consumer-targeted activation. Clear Channel views this as a case study that it will be able to bring to clients and advertisers in order to sell similar activations in the future. The Dunk Tank is the most advanced digital billboard the brand has ever deployed and social media integration is key to the activation’s potential success, the brand says. In fact, the joining of the two has prompted Clear Channel Spectacolor and technology agency JUXT Interactive, which handles the event, to label it a new form of advertainment called “Crowd Play Media.”

“Conventional advertising is passive, but this requires engagement and participation from the crowd. It allows brands to reach consumers in a way that gets people to take interest in the brand,” Mike McGraw, vp-creative, marketing and project management at Clear Channel Spectacolor, told Buzz. “This was a proof-of-concept to show advertisers what we can do with these screens.”