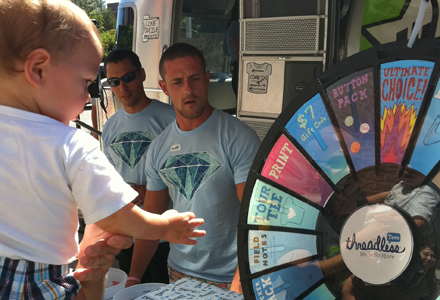 Online t-shirt retailer Threadless this summer launched its first mobile tour to celebrate the company’s tenth anniversary and introduce itself to its fans face-to-face. The e-retailer’s Threadless Everywhere tour traveled in a customized Airstream trailer branded with Threadless’ logo and a van wrapped in graffiti-style art, and stopped at a series of design shows, festivals and craft fairs across California. The brand also staged a pop-up shop outside Comic-Con in San Diego before closing the first leg of the tour last week. The second phase, which is still being planned, will hit the East Coast, and could include stops in Boston and Washington D.C., with a pop-up in New York City.

Inside the trailer, the walls are wrapped in high-quality birch to lend an art gallery feel. The main attraction was the eight-foot by four-foot art wall where guests could spend hours drawing and creating designs on the archival surface with almost any implement, from Sharpies to watercolors to (this actually happened) the paint from popped paintballs. After each tour stop, the “canvas” was saved for a future (as yet undisclosed) project. In addition, fans could relax on the plush orange couch in the back of the van, design a t-shirt and toss beanbags or spin a wheel for Threadless prizes.

The brand is also generating online buzz through Twitter posts, a Facebook page, a dedicated Flickr channel where staffers post video and photos from the tour and a partnership with location-based social media platform Gowalla. The Threadless Everywhere tour is the first-ever mobile Gowalla hotspot, thanks to a unique GPS gadget that travels with the tour and, when activated by staffers, transmits the tour’s location to Gowalla’s servers so that the new spot can be found by fans. When they check in with Gowalla, the attendees earn a special Threadless Everywhere badge and a free Gowalla t-shirt.

“We’re an online company and we didn’t have much of a real-world presence, so the emphasis with this tour is to get out there and meet our fans, shake their hands and say, ‘Hi,’” Dustin Henderlong, event coordinator and tour manager at Threadless, told Buzz. “It’s been amazing to connect with real people on the road.”

The tour is staffed and run in-house. Dallas, TX-based agency The Marketing Arm was responsible for planning and logistics.