There's an App for That - Event Marketer 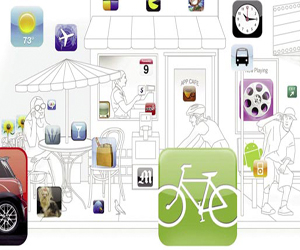 There’s an App for That

THE IPHONE, BLACKBERRY, PALM, ANDROID and other smartphones are, according to some experts, slated to become the device of choice among consumers, bypassing even the personal computer and laptop over the next year. As always, in-the-know brand marketers at companies like Autodesk, MillerCoors and eBay are riding the knife-edge of progress and creating exclusive branded apps that tie into their live events and keep their brands top of mind among consumers.

A mobile application, or app, is a downloadable software and Internet application that runs on smartphones and other web-enabled mobile devices. These apps are frequently games or tools that make day-to-day tasks more convenient and fun. For event marketers, some of the best new apps are trade show-related. For instance, ChirpE, designed by theOnswitch, compiles exhibitor info and session schedules and helps attendees schedule the sessions they want and pinpoint the exhibitors they want to visit. Pyxis Mobile’s app MyConference Mobile creates a custom event community for each event with message boards, local news, Twitter integration and live event updates and chat. Many apps are available for free download and are ad-supported or tease a paid, “full version” app. Others cost very little or are subscription- based. Marketing and event-specific apps are almost always free.

In a recent report by technology research firm IDC, it predicted the next 12 months will be a “watershed year in the ascension of mobile devices,” led by the Apple and Android platforms. MillerCoors got on the Apple bandwagon to get ready for Super Bowl XLIV, with the Coors Light 1st and Cold campaign, which rolled out in December (44 days before game day). The companion app, developed by interactive agency FullHouse challenges players to score as many touchdowns in two minutes as they can by tapping the screen to pass, tilting the iPhone to run or flicking the screen to kick a field goal. Throughout the 44 days between launch and the Bowl, brand ambassadors are hitting bars across the country, carrying iPhones and helping bargoers compete for branded prizes both in person and by downloading the app.

Apps are only getting more popular, even in the b-to-b markets. Since September, Autodesk’s Sketchbook Mobile Express app, which is a simpler, free version of its Autodesk Sketchbook Pro software, has been downloaded almost one million times and was the number one entertainment app and number three top grossing app in the United States in its first few weeks on the market. Paul Reddick, ceo of Handmark, one of the leading app developers and distributors, says that the b-to-b applications of apps are just beginning to take off. “It starts with the impulse to move away from paper collateral at trade shows,” he says. “There is going to be a movement over the next four years to save money and go green by going paperless and it’s a foregone conclusion that you’ve got to get that information and collateral on attendees’ phones.”

The goal, Reddick says, will be for all the conference, trade show and road show collateral and content to reside within an app, so it won’t even require constant wi-fi once the app is downloaded. The only time the user will need to be connected is for periodic updates. “The key element is that everyone always has their phone on their person anyway, so [with this kind of app], attendees won’t have to carry anything else and will still get the most out of your events,” he says. “In the past, a brand might not have created a new, event-specific app because of the cost [they can run up to $100,000], and it would only cater to one platform. Now, we can develop for many platforms simultaneously and for much less money.”

The balance is still on the consumer side, however. Ebay opened its first-ever live presence this past holiday season with its eBay @ 57th Street pop-up in New York City, where it debuted its new mobile iPhone app. Through the app, which brand ambassadors encouraged visitors to download, shoppers could make purchases, keep track of ongoing auctions through its “Push Alerts,” find the best bargains with the “Deals” function and pay via a complete roster of methods, including PayPal. All that is nice, but the numbers are what make it truly tasty. So far, the campaign has racked up more than $500 million in sales, more than five million downloads, a purchase every two seconds and users from more than 165 countries.

Marketers want more than just fun and games from their apps, naturally. So developers are also looking at how to get some data capture, lead geneneration and proof-of-ROI for their clients. Emiliano Abramzon, founder of app developer ideasforiphone, says the boom is just beginning, despite the thousands of apps already on the market. “It will be like the Internet 15 years ago,” he says. “In a few years, every brand will have its own app, if not more than one.” As the name makes clear, Abramzon’s company focuses on apps for the Apple iPhone and iTouch and though it designs any number of types of app, its key offering is data capture.

Through the company’s software, brands like Sears and Kleenex have collected thousands of leads and consumer contacts at their live events, Abramzon says. As a sponsor of the five-city Latin Grammy Awards festivals, Sears turned to New York Citybased interactive agency Bravo for its data capture needs. Bravo sent brand ambassadors to the streets at each festival, armed with iTouch devices and ideasforiphone’s software in order to build a new database for a move into a new online marketing space. The staffers asked attendees to input email addresses and names and a few other data points into the iTouch. More than 20,000 people at each festival obliged, in large part because it is fun to play with the device, and it’s easy. “If it takes too long, they won’t complete it,” Abramzon says. “Often they just want to play with the iTouch device, so they do the survey as a way of doing that.”

“The app paid for itself, no question,” says Paula McCorkle, manager-promotions and retail marketing at Bravo. “There were 100,000 people at the events and having our people in the crowd offering a 30-45 second interaction netted us exactly what we needed.” EM