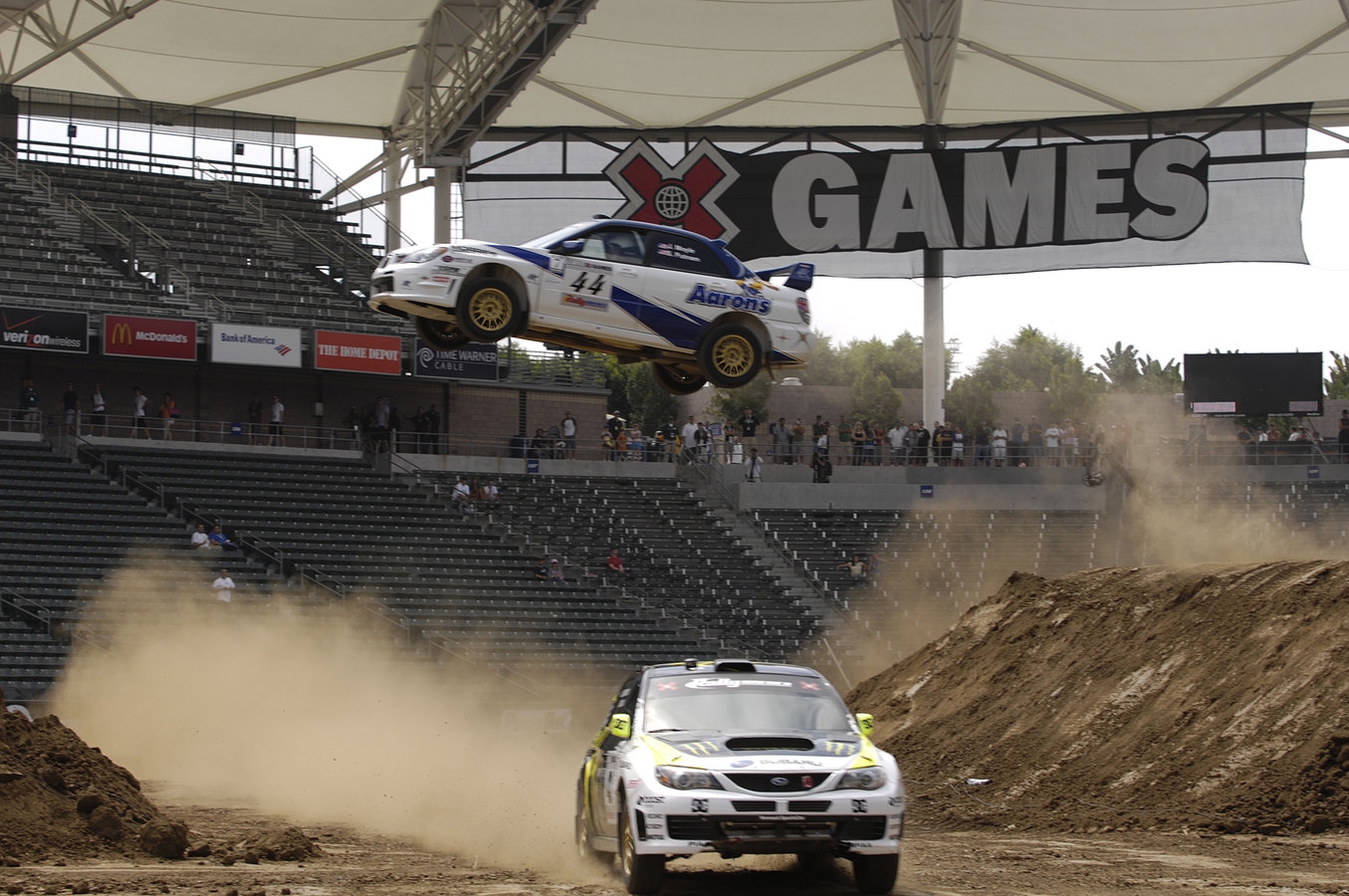 Now in its 14th year the once scrappy and alternative sporting event driven solely by youth and counter culture is being populated by 30-somethings who have homes jobs and kids of their own. Yet despite how much the first-generation fan base has changed its attitude remains the same—rebellious. (How else to explain all the pierced and tattooed parents jumping out of their hybrids with toddlers wearing skull and crossbones tees?) Can X Games sponsors continue to connect with a multi-generational audience that wants to forever stay just outside of the mainstream?
From Aug. 1-3 sponsoring brands set up in the hot California sun to vie for consumer attention at the event’s signature fan festival X Fest. Most created experiences with the same edgy flavor the X Games are known for but this year included a healthy collection of activities geared towards families and kids of all ages. Who still has the X factor 14 years later? EM’s Jessica Heasley braved the summer heat to find out.

NEW BALANCE
Ah New Balance. You totally get me and my on-again off-again relationship with running. Some days it’s love. Some days it’s hate. Some days it’s a pint of Ben & Jerry’s before bed. (You got something to say shoes?) To support its newest sneaker the Zip 1306 and its aptly named love/hate campaign NB filled three tented areas with themed activities suitable for kids and parents alike. Consumers lined up to go gangsta-light and get the words “love” and “hate” henna tattooed on their knuckles have their photo taken against a branded backdrop for a laminated “credential” to wear around their neck (and take to Finish Line after the event for a $20 discount off their new Zips) and visit two silkscreen stations where stencil art-inspired love/hate designs were being inked onto posters and handed out on the spot. A shoe display autograph signings and raffles every hour rounded out the crowd-friendly NB experience. Agency: Fuse Burlington VT.

TACO BELL
The allure of free piping hot tacos and burritos on a 90-degree day didn’t stop attendees from lining up 30-minutes early. (Perhaps it was the complete lack of desirable food options creating the frenzy. Seriously what’s up with the sad concessions at the X Games?) Taco Bell rolled in its mobile truck and served up the tortilla-filled goodness throughout the day while next door it sampled its icy cold Frutista Freeze drinks. Only buzz kill—the Frutista machine seemed to be well frozen throughout the day causing staffers to turn people away from the line. In a third zone consumers could test their strength grab a giant mallet and take their turn at trying to ring the bell at the top of the scale. The old time carnival favorite was updated with product information—a nice message integration strategy that didn’t bonk consumers over the head. Near the bottom a short list of Taco Bell’s 79-cent products. Next up their 89-cent products. And at the top everything you can buy for 99 cents. Everyone who took a swing got to pick from swag like chapsticks cowbells and headbands but by far the number one most popular item of the day was the foam Taco Bell taco hat—worn Mohawk-style of course. Agency: Intersport Chicago.

U.S. NAVY
Despite the heat young men and women lined up to test their athletic prowess in the push-up sit-up pull-up and rope climb challenges. Hot shots got their names posted on a rankings board and everyone who did the rope climb could retrieve their video online. (Data was collected via BRC cards at the entrance and at info kiosks.) The focus of the activation was underwater bomb disarming technology so adjacent to the Seal Accelerator exhibit (a staple at events where young men are a key demo) staffers engaged attendees with two remote control explosive disarming devices. Families with small children enjoyed the adjacent glass walled water tank where divers played tic-tac-toe with kids from inside the pool collected coins from the bottom and splashed them as they threw them out over the top and showed off their underwater robots. Kids could even try on one of the bulky diving suits. As always the entire experience was staffed by friendly and dare we say strapping local Naval recruiters. Agency: Campbell-Ewald Warren MI.

PIONEER
Under a white geodesic dome attendees could sit down rock out and cool off—all at the same time. Two brand ambassadors got their dance on just outside the door and lured attendees behind the curtain and to the source of the music pumping from within. The interior was a dark disco environment with video projected in panorama on the circular ceiling. Tunes were being mixed all day by live djs. Consumers that checked out product displays around the perimeter and signed up for a sweepstakes at one of the kiosks received a nylon branded tote. The activation is part of a nine-month tour that includes car shows and Moto X events to promote Pioneer’s car navigation products Pioneer Mobile. Agency: Elevation Cleveland.

EDGE
Behind a trio of inflatable arches the SC Johnson shave gel brand kept crowds of all ages engaged by inviting consumers onto a rubberized mini playfield for a variety of games and challenges including a tricycle obstacle course the skateboard balance challenge (like playing horse on a skateboard) and the hanger (who can hold a bag of Edge cans the longest). The ski ball and bean bag toss at the back of the footprint kept a steady flow of attendees coming through throughout the day. Challenge winners received the coveted skateboard deck while others won wheels a branded belt or wallet tattoos and key chains. Our pick for best brand ambassadors these gals didn’t let the blazing sun stop them from engaging a single passerby. Agency: OgilvyAction New York City.

NASA
Perhaps the air conditioning lured us in but what we got to experience was pretty hot stuff. The right stuff even. Inside a dome-shaped tent NASA brought together partners like Boeing and Lockheed-Martin to get kids and parents excited about space exploration. At the space food display an ambassador explained how the food is made and packaged. The NASA City interactive showed where NASA developments are found in everyday places. At the shuttle glove box attendees were challenged to take off and put back on skateboard wheels with crazy-bulky astronaut gloves on. A space-aged green-screen booth with lunar backdrops and stick-mounted thought cloud cards consumers could hold over their heads with phrases like “send sunscreen” and “wish you were here” was a fresh turn on an old idea. Called the Galactic Explorer Module the booth records and sends emails with videos of different scenarios in space and also takes and prints photos. On the way out 3-D glasses bring a full-scale Mars banner to life and Second Life city explains the history of space travel and its future plans. As if that weren’t enough people could sign a poster for the next shuttle crew and grab a deck of collectible cards that commemorate NASA’s first 50 years. (We got the Space Heroes deck.) Handled in-house.

OAKLEY
The sunglass brand’s slick but windowless main truck wasn’t so inviting from the outside but the adjacent street-style activities were fun and sticky enough to keep crowds in the Oakley zone for longer than just a passing glance. Just outside the truck gaggles of girls lined up next to a branded Freightliner to have a sun-kissed beach cutie spray paint stencil neon art on their arms and legs. A BMX trick rider performed nearby drawing healthy crowds. In the main exhibit known as the O Rolling Lab eight strength safety and material tests were set up in a mini R&D facility to show how Oakley’s sunglasses are built to exceed industry standards. One group got to see a pair of lenses get put to the test causing one observer to lament “Oh dude that was a perfectly good pair of Oakleys.” The O Lab hits golf NASCAR and Indy Car events but spends much of its 300 days of the year (there are actually three O Lab trucks) doing retail and educational stops at the request of sales teams. The rooftop deck made for a sweet VIP and media area but didn’t appear to be open at the X Games. Most folks walked through the truck without stopping which made us think—great vehicle perhaps just the wrong venue. Oakley got more mileage out of the simple sidewalk activation. Handled in-house.

STATE FARM
There could have been a dj battle between State Farm’s Now What? mix masters and the disco dome djs at Pioneer. The music provided by Scratch Academy inspired more than a few passersby to stop and do a little rump shaking. Three Academy jocks perched under State Farm’s tent not only spun live tunes all day they gave free demos every two hours. Attendees could also roll giant dice for a shot at free swag pose for souvenir photos collectable at nowwhat.com (photo partner: eshots Chicago) and grab a game piece for an online contest. There was also a rock climbing wall but no one was biting every time we walked by. It was probably because of the blazing heat. Agency: USMP Marina del Rey CA.

SCHICK
Skateboard decks were high value prizes at X Fest but Schick had the next best thing. Airbrush artists personalized foam core skateboard “decks” with names and the X Games logo. The giveaway was almost as cool as watching the artists work. Attendees could line up for a ski ball challenge prize wheel bean bag toss and of course the perennial autograph signings. Kids who said thank you for their free gift on the way out of the queue got a special wink that signaled the next staffer to enter their names in a raffle for a free bike. Lots of kids made the cut when we stopped by. Who says skateboarders are all a bunch of bratty troublemakers? Agency: Vivid Marketing Smyrna GA.

PLAYSTATION
It was like rock star fantasy camp inside Sony’s PlayStation Experience Truck. The touring vehicle this year included a new interactive Rock Band stage (as a tie-in to the tour consumers can enter their best rock band moments online for a shot at performing at a live concert) and SingStar Stage where mostly tweens and teens belted out their favorite Outkast R.E.M. Radiohead Britney Spears and Pussycat Dolls songs while watching the music video on screen. For the timid there were 28 more PS3 gaming stations to choose from. Friendly crew members were there to help but by the glazed looks in the attendees’ eyes the kids pretty much had it covered. Just outside the trailer staffers grabbed consumers and invited them to visit three tented PSP zones each dedicated to a different feature including Internet Radio (like XM) Love Connection (remote access to your PSP and PS3 games at home) and Game Play (play alone or with others online). Perky brand ambassadors encouraged passersby to visit all three get their punch card punched fill out the BRC card and enter to win a PSP Prize Pack. Agency: Marketing Werks Chicago.