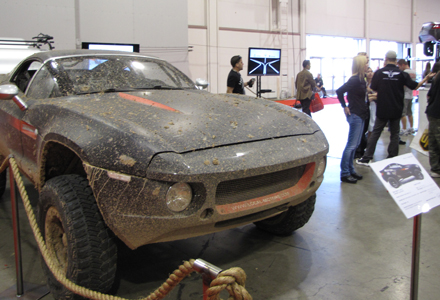 Over 100,000 attendees rolled into Las Vegas for the Specialty Equipment Market Association (SEMA) trade show that took place at the Las Vegas Convention Center Nov. 2 to 5. Sprawling over all three halls, the parking lot and every square inch in between, the show cranked up the volume on all things automotive aftermarket (or was that a race car burning rubber on one of the tracks outside, right next to the Jack Daniels mobile distillery replica?) Since the show is all about personal expression, brands and celebrities collaborated on special editions and custom everything, much to the delight of the engine-groping, rim-crazy audience. EM was there to bring you the highlights.

Ford
With graffiti-inspired signage like “Mustang Rocks” and “Ford Forever,” the automotive giant had possibly the most impressive presence on the floor. The space was dominated by a hanging Echo Boost 350, covered with streaks of paint strategically applied by the artist Camilo Pardo. The project took all three days to complete, and the final work of art was to be auctioned off for charity. Rapper Snoop Dogg was on hand to present his 2011 Ford Mustang, as was celebrity customizer Funkmaster Flex, with his new FMF Explorer. The line for the Ford Fiesta driving simulator could rival the one for the autographs—it’s good that thing had a seat belt. Several base models stood next to the decked-out rides, looking like canvases ready for serious creativity. Design: Imagination, Detroit; Build: EWI Worldwide, Detroit.

PPG Automotive Refinish
From Rock ’n’ Roll-era guitars decorated by celebrity car painters to vinyl records turned into paint swatches, PPG rocked the house with its 1950’s theme. The space was anchored with two PPG-painted 1959 Cadillac Couple de Ville show cars and a Ditzler drive-in front. Where else could you see a sign advertising “Car Service/Floats/ French Fries/Restoration?” Attendees got a chance to get autographs from car painting legends, take an industry-related class and brush up on their skills in a hula-hoop competition. Every little detail, from Elvis hair to event schedules turned menus, played into the theme and created a super-charged experience. Who knew that waterborne midcoat could provide so much inspiration? Design: Lucky Dog Displays, Las Vegas.

Honda
Honda brought 12 of its newest, meanest CR-Z models, decked out by the masters of customization. As attendees drooled over every little detail, the manufacturer invited them to learn more about the model by sending the information straight to their smartphones. Attendees could download an app and scan the sticker on the window. Powered by The Bar Pages, the microsite that appeared on their phones was full of info and videos about the model. Consumers got the latest updates at their fingertips, and Honda enjoyed analytics and a direct line to potential buyers.

Mopar
Muscle, street, speed and trail were the four focus areas at this immersive exhibit. To illustrate each concept, Mopar brought several custom editions—the 2011 RedLine Dodge Charger and 2011 Wrangler Sahara Mopar Edition, to name a few—and placed them in their natural environments, visually recreated with large-format graphics on the walls and the floor. Flat screens located above each area streamed the video of these beauties in action. The center of the exhibit was a giant counter in the shape of the brand’s logo, a great place to have a trade conversation and snatch a warm chocolate chip cookie. Attendees could also access the brand’s website via touch-screen kiosks. Design: George P. Johnson, Auburn Hills, MI.

Local Motors
Open-source car manufacturer Local Motors showed off its no-nonsense attitude with an exhibit that was vaguely outlined by ropes. The idea behind the company is that every car is designed by an online community of more than 8,000 car enthusiasts and manufactured in small local factories. To reinforce its mission, the cars were the only stars of the show. Local Motors brought two design prototype vehicles and three Rally Fighters, custom-made and caked with real mud for authenticity. The crowd didn’t mind a sheet of paper with the press conference announcement nailed to a particle board, the uncovered cement floor and the only design element being a car lift, which served a strictly utilitarian purpose of providing a better view. They could finally connect with what they’ve been working on online and seeing the results in person made them proud—and that was priceless.

DUB Tour
The rules of The DUB Show Tour, a separate show space that took up the entire parking lot in front of the South Hall, included warnings like “No G-strings for girls” and “No gang attire or the removal of shirts” for guys. Besides the “racy” lifestyle of its demographic, the tour focuses on car accessories. Xbox360, Pirelli and NBA2K11 were just some of the brands revving up the volume as the crowds explored over 80 custom rides and scored autographs from UFC fighters, among other celebrities. The Monster Zone was there to fuel the excitement with gallons of Monster drink sampling and to introduce a flavor designed especially for the Tour. Several brands chose to have a presence both here and inside on the show floor, engaging thousands of attendees craving the action. Producer: DUB Publishing Inc.

Galpin Auto Sports
While Galpin’s custom rides were strategically positioned throughout the show, the brand took advantage of the outside space with a tent that was a perfect representation of its philosophy—cool and clean self-expression. Anchored with two classic hot rods, the space bounced with music by a live dj. Black and white graphic imagery on the back wall tied in with the overall look and feel and provided a perfect backdrop to show off the auto masterpieces. For a relatively small space, the brand didn’t skimp on details and created a big impression.

Spectra Chrome
A giant mud truck was the first point of attraction at the Spectra Chrome exhibit, but it was the media wall in the back that provided a backdrop that grabbed the attention of attendees. Its intense metallic shine made the space stand out even in the sea of bling, a perfect showcase for the company’s paint process. Who would have thought that the wall was made of Styrofoam? Attendees took photos with the King Sling truck and then with a smaller “quad” vehicle, tiny by comparison but fierce thanks to its body made to look like a shining dragon. Design: In-house.

Alienware
From camouflage netting to heavy-duty metal pedals, combat was written all over this mobile exhibit. Attendees got their taste of warfare thanks to the multi-screen driving simulator made out of a transformed branded Hummer. Some were so entranced by the driving experience it took a reminder from the staff to get them back to reality. Brand colors of black and blue were incorporated in every element, making it a perfect miniature version of other Alienware retail and event experiences. Design: Mother, New York City.